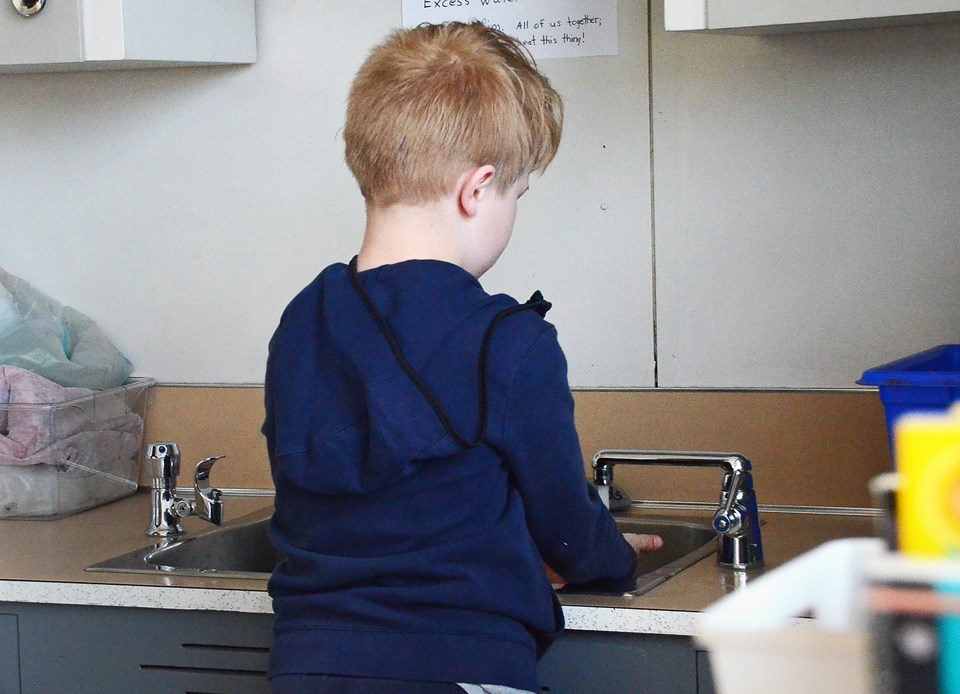 A Sperling Elementary School student washes his hands at a classroom sink in June.Cornelia Naylor

More than 2,100 people tuned in to an online back-to-school briefing Monday to hear about the Burnaby school district's plans for keeping students and staff safe as they head back to class during an ongoing global pandemic.

Based on early results from a survey sent out last week, the district expects most students to return to schools this month, superintendent Gina Niccoli-Moen said during the briefing.

And health and safety manager Terry Gomez outlined a myriad of safety measures the district has created to keep them safe when they do.

During the briefing, Gomez hit some of the highlights, including the plans for enhanced cleaning.

In early August, when the province announced students would be going back to school this month, cleaning was a “big concern” for local schools, according to Gomez.

“We all kind of held our breath a little and said, ‘How do we maintain the cleaning?’” he said.

Since then, however, the district has begun to hire extra workers who will focus on high-touch areas.

The district also plans to increase its casual custodial pool, according to Gomez.

Should extra deep cleaning be needed, the district now also has one Clorox 360 machine for each of its four zones, he said.

Orientations, taking place over the next two weeks, will be “paramount” when it comes to the rest of the anti-COVID-19 protocols and plans, according to Gomez.

He said anyone who “touches” the school district – regular staff, casual staff, contractors, etc. – will be required to read and understand its health and safety handbook.

As for handwashing facilities, those have been a “big challenge” for the district, Gomez said, and the schools will be using a combination of handwashing and hand sanitizer.

Fraser Health has told school officials handwashing is still the most effective control measure for COVID-19, according to Gomez, but he said the district has a large number of portables without sinks, so those will be equipped with hand sanitizer.

“We are installing some additional sinks,” Gomez said. “We’ve surveyed the district again and created a priority list.”

Not all sinks will be in bathrooms either, according to Gomez. Some will be installed in hallways to avoid crowding in bathrooms.

Some parents have raised concerns about ventilation at schools, but Gomez said all school buildings, including portables, use filtered air, and those air filters will be upgraded and replaced more often.

Controlling the flow of people and access to shared spaces is another part of the district’s safety plan.

“Prior to COVID, you would go anywhere in the school any time you felt like it for whatever reason you felt was valid, and that just isn’t the case now.”

As per a provincial directive, they will also be required to wear a mask in high-traffic areas, like hallways, so the district will supply two reusable masks to each student, according to Gomez.

He said the district has learned from each of the pandemic stages it has worked through, starting with providing educational opportunities for a few children of essential services workers in April to putting on a summer school session for nearly 4,200 students this summer.

“We were successful in all of those stage 4 and stage 3 periods of time,” he said.

Watch the complete video of the school district’s health and safety briefing here.