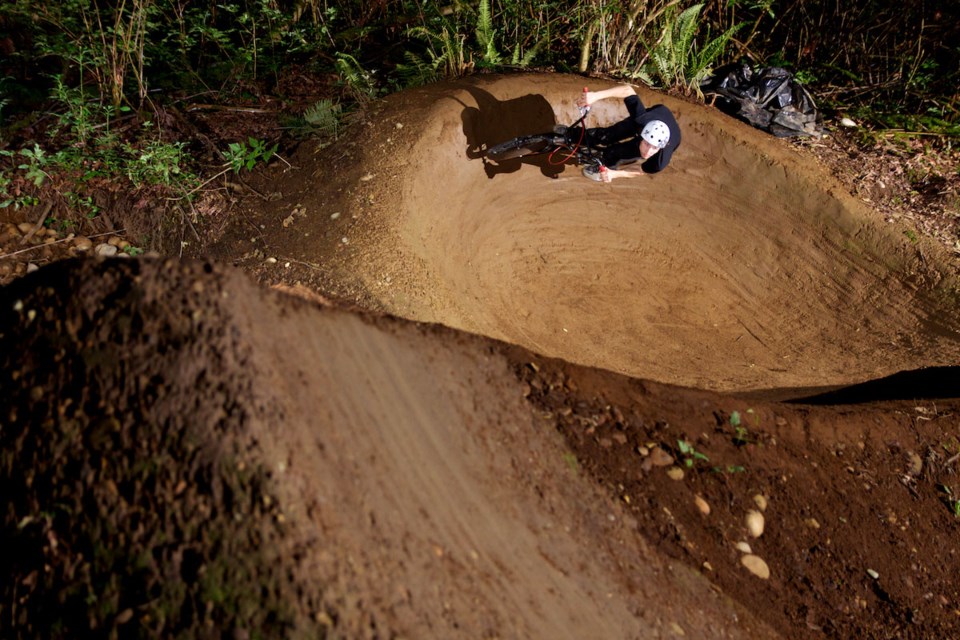 BMX bikers have built an extensive network of berms and jumps in a conservation area in North Burnaby.Jason Vawter/submitted

A hidden BMX bike park is facing demolition after it was discovered by a City of Burnaby employee.

Kush Woods has grown in secret over the last 25 years in a conservation area in North Burnaby, according to BMX rider and trail builder Chester Jones.

Jones said the park started when a group of mountain bikers began building trails in the wooded area near Stratford Park. When the BMX rider and some friends got involved about 14 years ago, they began building jumps, berms and a large dirt bowl, he said.

It has since grown into the largest BMX trail system in Canada, Jones claims.

But all this happened without the knowledge or consent of the municipality, which only learned of its existence approximately three weeks ago, Jones said.

And now the city plans to take away a vital part of the local bike community, Jones said.

“They want to demolish our experimental park,” he said.

The park attracts riders from around the world and caters to experienced riders, including X Games athletes, Jones said.

Jones has been able to leverage the international BMX community’s support, with nearly 10,000 signatures on an online petition to “Save Kush Woods.”

The BMX park “violates several city bylaws and the activities there expose the city to liability risk,” according to city spokesperson Chris Bryan.

“As a city, it’s important to us to encourage opportunities for safe, fun recreation. However, this facility has been built in Capitol Hill Conservation Area. As such, we are concerned that unauthorized construction may damage the long-term health of the trees, the natural environment and habitat in the area affected,” Bryan wrote in an email.

Dave Ellenwood, Burnaby’s parks director, said the city is willing to work with the bikers to possibly build new jumps at Burnaby Mountain Air Bike Skills Park that cater to their expectations.

“We know they’re passionate about their sport,” he said. “It’s not that the city wants to take action against a group trying to bring recreational opportunities to the city.”

But it’s the city’s job to protect the sensitive conservation area – and the bike park simply cannot remain, Ellewood said.

While Jones acknowledged the park is in a protected conservation area, he said the BMX community is a responsible steward of the environment, rather than a threat.

“We take great care out in the woods,” he said.