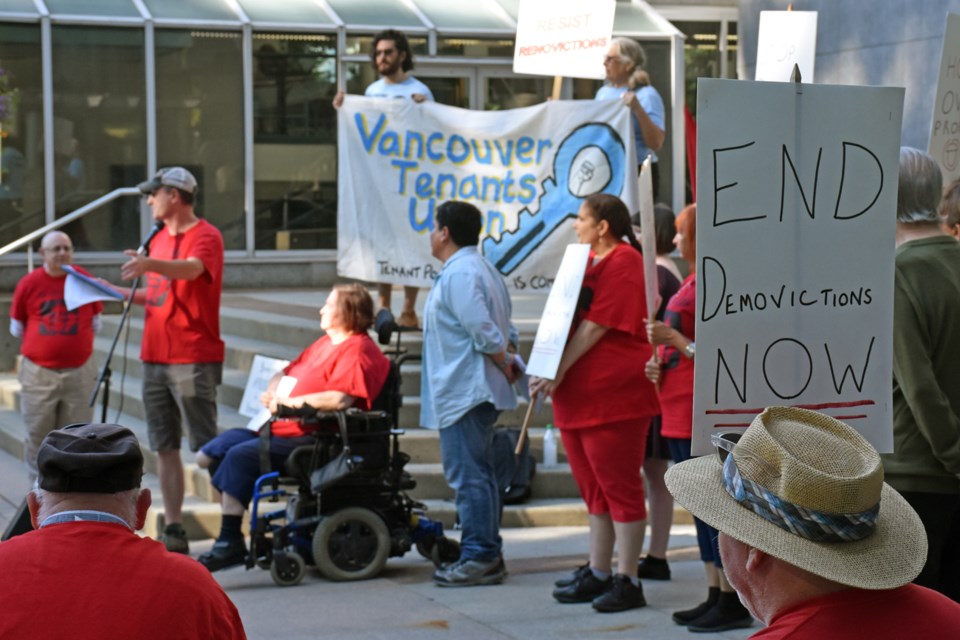 Their signs and T-shirts read “tenant power” and “end demovictions.” There were speeches, cheers and chants.

It was a familiar scene outside Burnaby City Hall – the battlefield between housing activists and local politicians in recent years – but Monday was different.

This time, the rally was jubilant. Some 50 people came to see council pass the landmark final report from the mayor’s task force on community housing, including what could become the country’s most robust protections against tenant displacement.

Murray Martin, an ACORN activist and task force member, admitted it felt odd to lead a positive rally ahead of a Burnaby council meeting. He’s more accustomed to railing against the city policies that led to thousands of Metrotown renters being displaced by demovictions – evictions to allow the demolition of apartments to make way for new developments.

When renters began organizing five years ago, he said, “it seemed like a hopeless campaign,” but they “just kept slogging on it for years and years and years” and eventually saw a new mayor come to power on a promise to take better care of them.

The most detailed recommendation calls on the city to “adopt a robust tenant relocation policy.”

The proposed policy would require landlords of buildings with six or more units to provide temporary accommodation – in either market rentals or “swing sites” – for tenants they displace.

If the rent is higher in an interim market-rental unit, the original landlord would have to “top up” their tenants’ payments to ensure they aren’t paying more. The report suggests capping the top-up at 20 per cent above the average market rate found by the Canada Mortgage Housing Corporation.

“Swing sites” could be built via public-private partnerships to provide dedicated temporary housing for displaced tenants, the report says.

The proposal would also require landlords to cover up to $1,000 in moving costs for tenants moving in and out of temporary accommodations.

Once a displaced tenant’s apartment is either renovated or replaced with a new development, they would have the opportunity to move back in at the same rent – subject only to regular annual increases for incumbent tenants.

The city would require the above demoviction provisions in the rezoning process for new developments.

The policies are mere suggestions at this point, but Mayor Mike Hurley said he expects something “very close” to become official policy as early as this September.

Since the beginning of last year’s municipal election campaign, Hurley has promised a robust set of policies to protect tenants from displacement. But since his election, some renters have expressed doubt he would follow through.

Asked how it felt to have such a plan on paper, Hurley said, “It feels a relief, to be honest, that we have come to a point that we have a relocation package that seems to satisfy the needs of tenants and developers alike.”

The mayor said the city is already eyeing potential sites for modular “swing sites” that could be built on land owned by the city or loaned from developers.

'Our work is not done': activist

Kari Michaels, a task force member and executive vice-president of the B.C. Government and Service Employees' Union, told rally goers Monday that Metrotown demovictions represented “one of the most massive transfers of wealth from working class people to the wealthy elites.”

But, she said, the tide is now turning.

“Our work is not done. It has just begun,” Michaels said, “because the only way this came about is because people came in Burnaby organized and made housing a number one election issue for the municipal elections.”

The activist ended her speech with a chant heard at countless preceding rallies: “When we fight, we win!”