Housing advocates continue to fight the loss of older rental buildings in Burnaby, setting their sights on proposed changes to the Metrotown development plan.
Oct 28, 2016 10:22 AM By: Jeremy Deutsch 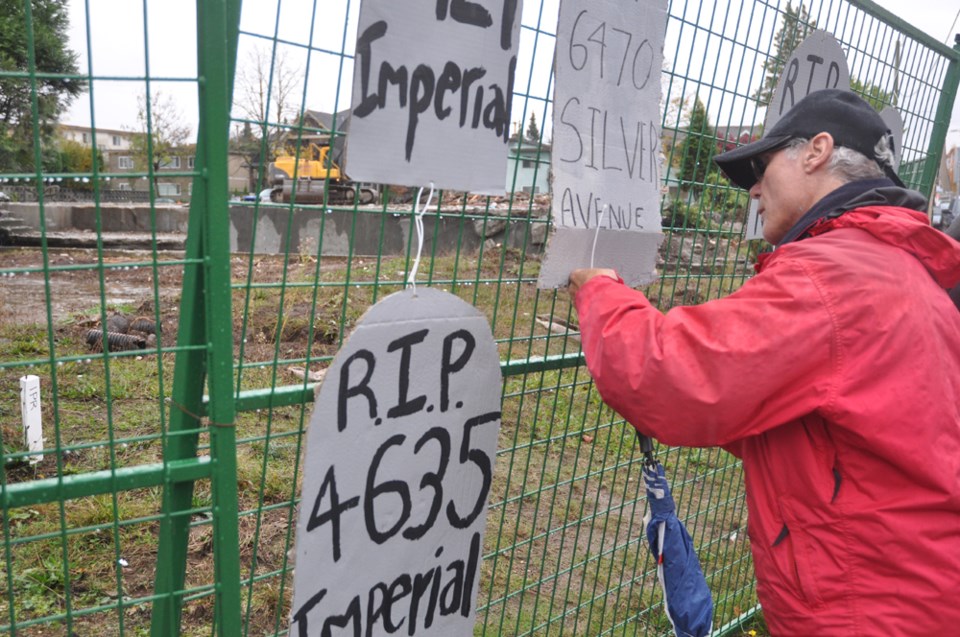 Terrence Sinclair puts up a “tombstone” in memory of a building in the Metrotown area demolished to make way for a new development.Jeremy Deutsch

Housing advocates continue to fight the loss of older rental buildings in Burnaby, setting their sights on proposed changes to the Metrotown development plan.

On Thursday, local members of ACORN (Association of Community Organizations for Reform Now) gathered at the corner of Dunblane Avenue and Imperial Street, the site of recent demolitions of older apartments in the city, to protest the ongoing demoviction issue in Burnaby.

The group hung up cardboard “tombstones” along a construction fence to signify the amount of apartment buildings lost to new development in the area.

Members of ACORN also called on the city to scrap the current Metrotown development plan and create a new plan that would allow for more affordable housing.

“There’s going to be homelessness as a result of this as a direct action of the city council,” said ACORN spokesperson and Burnaby resident Murray Martin.

He suggested the Metrotown plan under consideration would mean the loss of 3,000 rental units, displacing as many as 8,000 people.

A map from the Stop Demovictions campaign shows at least 11 buildings have been demolished, and nearly two dozen more are slated for demolition and in the rezoning process.

The local ACORN chapter is also calling on local MLAs, both NDP and Liberal, along with candidates in the next provincial election to condemn the demovictions.

The city is currently in the middle of updating the Metrotown development plan that would shape the area for decades to come.

Matthew Hunter lived at 5025 Imperial St. until he was evicted to make way for a new development.

“It’s so weird to look where my building was for years and it’s just a demolition site now,” he said.

Hunter said it was the cheapest apartment he’s ever had, adding “it was too good to be true.”

“People like me aren’t welcome here anymore,” he said, adding only “rich people” are welcome in the new Metrotown plan.

In September, after a similar protest, Coun. Colleen Jordan defended the consultation process, adding there will be many other opportunities for residents to have a say. She noted it’s still early on in the process and the project will have to go to a public hearing before it gets approved.