'I want to be prime minister': Singh plans NDP revival after byelection win

The incoming Burnaby South MP says he can represent the riding while leading a national party
Feb 26, 2019 1:56 PM By: Kelvin Gawley 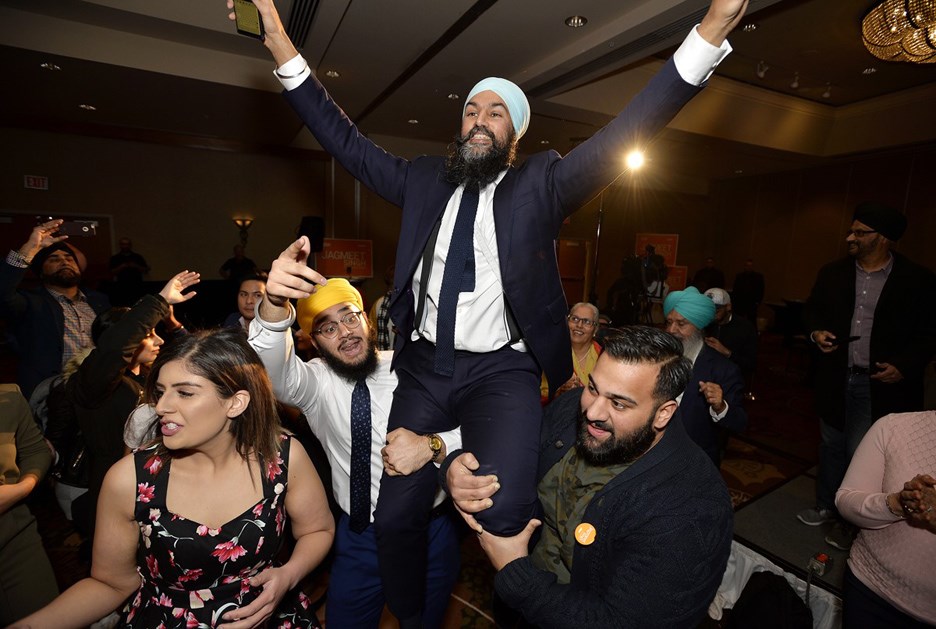 Jagmeet Singh is carried around by the crowd at his victory party Monday night. JENNIFER GAUTHER PHOTO

Just hours after playing dance-floor hype man at his victory party, Jagmeet Singh was back at work.

The NDP Leader and incoming MP for Burnaby South was making the media rounds by phone Tuesday morning, presenting his plan to rally the country behind him before the fall general election.

“We want to show people the choices they have,” Singh told the NOW.

Singh cruised to victory in the Burnaby South byelection Monday, pulling 39 per cent of the vote. Liberal Richard Lee was nearly 3,000 votes behind him, with 26 per cent support. Conservative Jay Shin came in a close third with 22.5 per cent.

Singh thanked the people of Burnaby South, his new neighbours, for their support in a rousing victory speech.

“I will be your champion,” he said. "I will take each and every one of you to Ottawa. I will fight for you in the House of Commons.”

Singh, the first visible minority leader of a major federal party, said he never imagined seeing someone like him running to become prime minister.

“We just showed a lot of kids out there that yes you can,” he said to the raucous cheers of New Democratic supporters assembled at the Hilton Vancouver Metrotown.

After his speech and speaking to media, Singh emceed the victory party. He clutched the mic as he sang along to Post Malone’s Congratulations, taught supporters bhangra dance moves and cheered as his mom danced the twist.

But by the next morning, the NDP leader had clearly put the celebratory mood behind him, with a big task in front of him.

Singh’s party is slumping in the polls at 14 per cent nationally, while the Liberals and Conservatives are neck at 35 and 34 per cent respectively, according to the CBC’s poll tracker aggregate.

Singh said he’s confident he’ll be able to turn the ship around.

“We're going to sharpen our message, which is we do believe that we can make better choices,” he said.

Singh said the NDP will expand on its two central policy issues in the byelection – housing and pharmacare – in the coming months.

Asked whether he would return the party to its socialist roots and away from its more recent centrist election platforms, Singh said he has “staked out some really strong ground” in his vows to build 500,000 units of affordable housing over 10 years and introduce a national universal pharmacare program.”

And he’s not stopping there.

“I want to look towards full comprehensive coverage that includes dental care and eye care,” he said. “I've signaled some of these things, and I'm really excited about what we can do if we make better decisions.”

But will the concerns of Burnaby South residents be forgotten as Singh travels the country in an attempt to revive his party?

Singh said he’s not sure exactly when he’ll be sworn in as a member of Parliament, but he knows his first day serving in the House of Commons will be March 18 – 217 days before the general election on Oct. 21.

His sights are set high for that day.

“I want to be prime minister, and I will work hard to achieve that goal,” Singh said. “My goal will always be to form government because I feel like that's the way I can make the most positive change in people's lives and build a better country.”