Federal NDP Leader Jagmeet Singh finally confirmed today all the wild speculation that he plans to run for Parliament in the riding of Burnaby South.
Aug 8, 2018 12:52 PM By: Kelvin Gawley 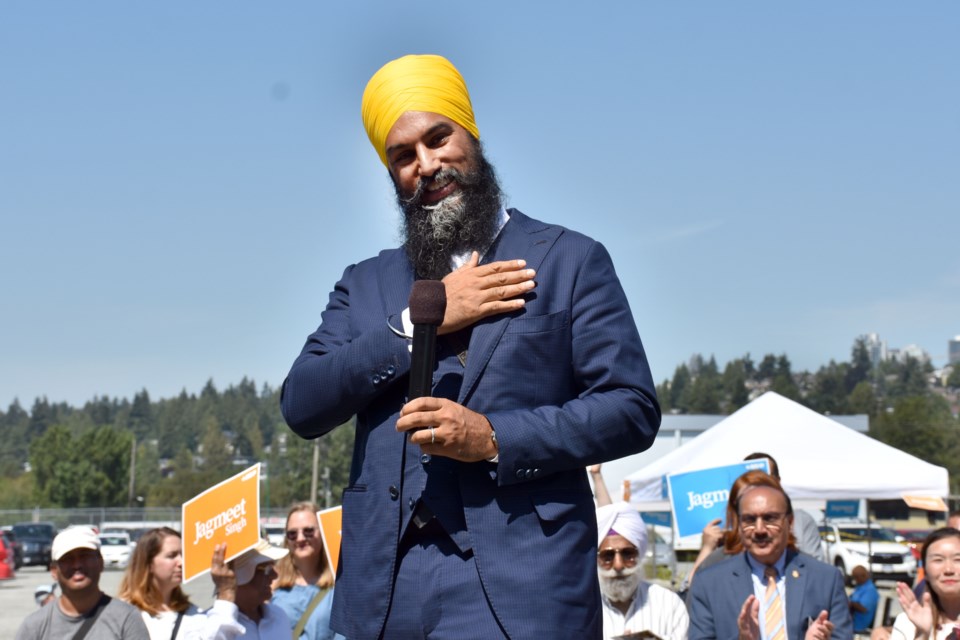 On Wednesday, Federal NDP leader Jagmeet Singh announced his intention to run in a byelection in Burnaby South.Kelvin Gawley
Federal NDP Leader Jagmeet Singh finally confirmed today all the wild speculation that he plans to run for Parliament in the riding of Burnaby South.
Singh was surrounded by NDP faithful, including former Burnaby MP Svend Robinson, current BC NDP MLA Raj Chouhan, and MP Peter Julian, when he made the announcement -- talking about all the "love and energy" in Burnaby.
Singh made the announcement from a small stage surrounded by supporters on a film and television lot in the riding.
Singh told the crowd the NDP would bring in universal Pharmacare – adding that the Liberals only want to study the issue.
“The reality is, millions of Canadians don't have access to medication when they need it,” he said. “It breaks my heart.”
He also criticized the Liberals for their national housing strategy, which won’t start doling most of its funds for another two years. Singh said this timeline is unacceptable amid the housing crisis in the Lower Mainland.
If elected, he would replace fellow New Democrat Kennedy Stewart, who recently tendered his resignation as MP to run for mayor of Vancouver.
Prime Minister Justin Trudeau must call a vote to replace Stewart within six months of his official resignation date, Sept. 14, but he is not required to call a byelection. Trudeau could decide to leave the seat empty until the general federal election in October 2019.
Either way, Singh said he will run in Burnaby again and move to the riding with his wife should he win.
“I'm committed to Burnaby South. I'm all-in on Burnaby.”
Singh has never held a seat in federal politics. He was a member of the Legislative Assembly of Ontario from 2011 to 2017 before becoming replacing Tom Mulcair as the leader of the federal NDP.
Singh made clear his intentions in Burnaby official Wednesday in a press conference at the Canadian Motion Picture Park Studio lot in south Burnaby.