‘It’s going to be some heated affairs:’ Coquitlam Express set for 20-game schedule in Burnaby 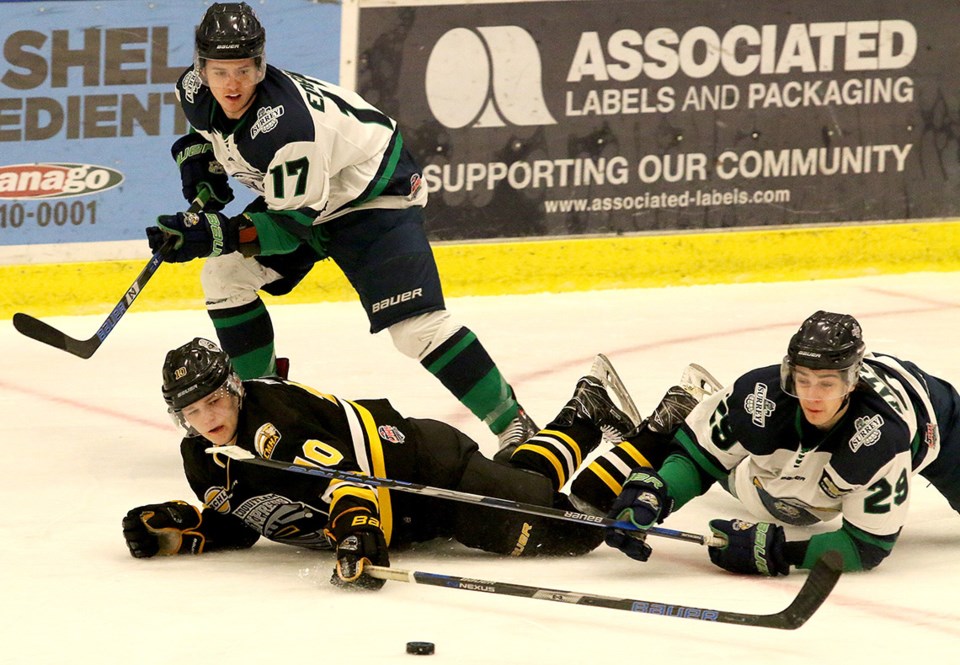 The Coquitlam Express will be seeing a lot of the Surrey Eagles in the team's five-week pod season at the Scotia Barn in Burnaby. They'll face each other 10 times, along with another 10 games against the Powell River Kings.MARIO BARTEL/THE TRI-CITY NEWS FILE PHOTO

It’s going to be a busy five weeks for the Coquitlam Express beginning April 2.

That’s when the BC Hockey League’s defending regular season champions open a compacted 20-game schedule against the Surrey Eagles, one of three teams playing in the Lower Mainland’s pod based at the Scotia Barn in Burnaby.

The other team is the Powell River Kings, Coquitlam’s opponent the following afternoon at 1 p.m.

The Express will play each of their opponents 10 times, concluding with a game against the Eagles on May 9.

The frequency of games as well as the familiarity of opponents is likely to breed some intense rivalries, said Express general manager, Tali Campbell.

“It’s going to be some heated affairs,” he said.

Alas, fans won’t be allowed in the building to comply with public safety protocols.

While Coquitlam is considered the host city for the pod, games had to be moved to Burnaby because the ice is being removed from the main arena at the Poirier Sports and Leisure Complex to accommodate lacrosse, and the city had expressed concerns about access with a COVID vaccine centre across the street at the Forum and Dogwood Pavilion.

The BCHL’s pod plan for some form of competitive season is part of its return to play after the league was sidelined since Nov. 19 because of tighter public health restrictions to curtail the transmission of the coronavirus. Teams had been playing exhibition games in regional cohorts since late September.

Other pods are being played in Vernon, Pentiction, Chilliwack, and Port Alberni.

As yet the league hasn’t announced its intentions for post-season play. In January Hockey Canada announced the cancellation of all national championships, including the Royal Bank Cup Junior A finale that was scheduled to be played in Penticton.

During the five-week pod system, players will be restricted to staying at their billet homes, travelling individually just to the arena for games and practices. Players and coaches will be tested for COVID-19 following a brief training camp to be held this weekend, then randomly afterward.

And while spectators won’t be in attendance, all games are being live-streamed for online viewing.