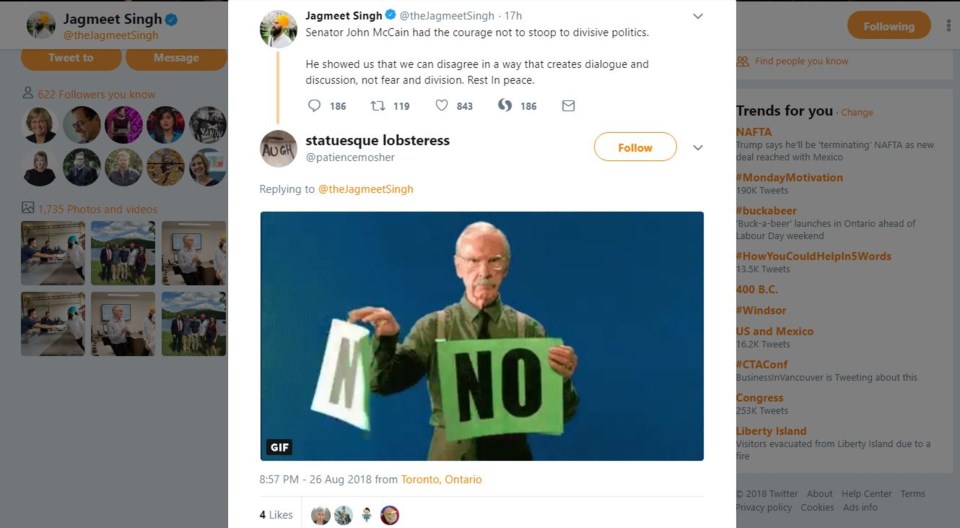 In a Tweet, he praised the U.S. Senator from Arizona, who died from brain cancer on Saturday, for his “courage not to stoop to divisive politics.”

“He showed us that we can disagree in a way that creates dialogue and discussion, not fear and division,” Singh said. “Rest In peace.”

Senator John McCain had the courage not to stoop to divisive politics.

He showed us that we can disagree in a way that creates dialogue and discussion, not fear and division. Rest In peace.

Singh’s tweet was met with incredulous anger from many Twitter users. Many people expressed anger that the leader of Canada’s left-wing third party would praise a staunch Republican conservative who supported military interventions around the world. Most of the criticism appeared to come from people with progressive politics, who may be traditional supporters of the NDP.

He sold off sacred Indigenous land to foreign companies, against the wishes of local Nations. Does that not sound divisive to you? I’m not even going to touch on his war-mongering, because I know you already know all about that.

You could’ve said nothing. Who was this tweet for?

I’m sure that Iranians thought his rendition of “Bomb bomb bomb, bomb bomb Iran” rose above the fray of divisive politics

"John McCain heavily promoted the lies that led to the Iraq war.

He championed the NATO bombing of Libya.

He played a role in bringing neo-Nazis to power in Ukraine & backed Saudi Arabia’s genocide in Yemen.
He was no hero."

why dude. you don't get brownie points for praising a racist war criminal. he's not even in the same country.

he supported Israel, the Saudis, called Vietnamese people ‘gooks’ and said Arabs were bad spoke. he supported more wars than I can count. he opposed MLK day and worked against lbgt rights.

While it appears the vast majority of replies to Singh's tweet were critical, not all were.

Kyle, John McCain did exactly what you are not doing with that comment, which was to emphasize that disagreements are about the politics, not the person. He admitted that he did not always agree with certain people's views, but that did not mean that they were not good people.