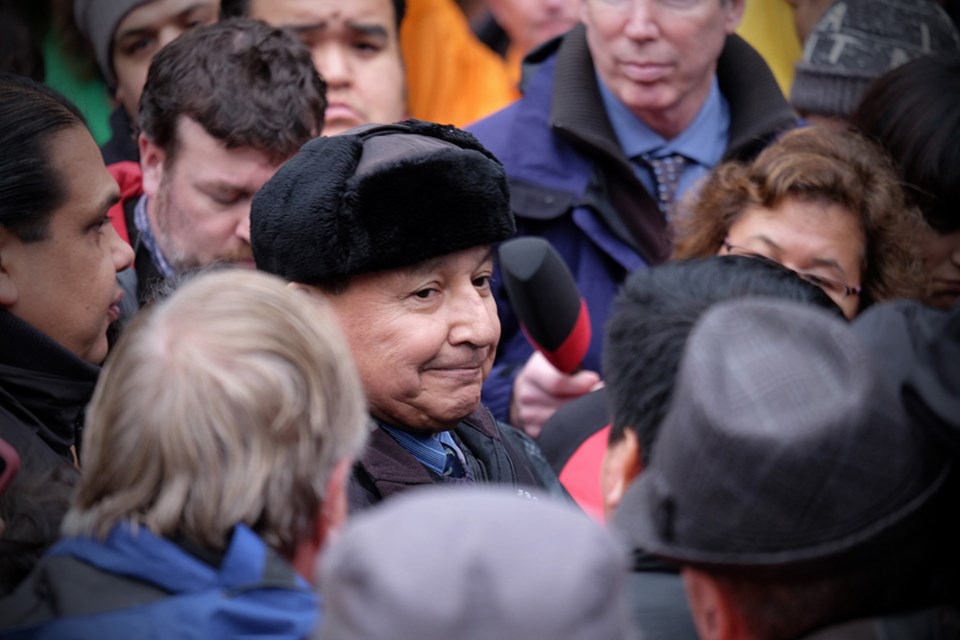 Grand Chief Stewart Phillip of the Union of B.C. Indian Chiefs crossed the injunction line today, along with 22 others, bringing to total number of arrests on Burnaby Mountain to 126. However, a B.C. Supreme Court justice just ruled civil contempt charges against all those arrested so far would be dismissed.Larry Wright

A B.C. Supreme Court judge has dismissed civil contempt charges against more than 100 people who crossed injunction lines in protest of Kinder Morgan's survey work to expand the Trans Mountain pipeline on Burnaby Mountain.
"All the charges of civil contempt that are returnable Jan. 12, 2015 have been voided," said lawyer Jason Gratl. "I'm elated. Victories for the protesters are few and far between, and I'm savoring this one."
There are still four Criminal Code charges on the books for some protesters, Gratl explained, but all of the civil contempt charges for people who crossed the injunction lines up until 1:45 p.m. Thursday have been dropped, including those against Grand Chief Stewart Phillip of the Union of B.C. Indian Chiefs.
According to Gratl, the judge dismissed the charges because Trans Mountain made an error in the GPS coordinates for the injunction areas and failed to post signs saying "stay out by order of the court." Also, the police enforcement zone (in which many people were arrested) wasn't authorized by the court, Gratl added.
"(They) all combine to make it pretty clear that charges of contempt of court were very unlikely to stick," he said.
The injunction, which prohibits people from interfering with Kinder Morgan's survey work for a new pipeline route, expires on Dec. 1.
Gratl also said Kinder Morgan's request to extend the court injunction until Dec. 12 was denied. The rationale was Kinder Morgan didn't need the extension because the company was on track to meet the National Energy Board's Dec. 1 deadline to file the results of the survey work.
"The chief justice held them to what they told the NEB," Gratl said. "The NEB is a court, too. So essentially, Trans Mountain was caught telling one court one thing, and another court another thing. And that proved very problematic for Trans Mountain."
Gratl is representing Mia Nissen and Adam Gold, two of the five protesters named in the injunction and Kinder Morgan's multimillion-dollar civil suit. Gratl also said the GPS coordinates for bore hole 1, a clearing in the woods where Kinder Morgan is still working, are now correct, and anyone crossing into the new injunction zone is in jeopardy.