The Watch House still stands in the path of the Trans Mountain pipeline, with no plans to move
Dec 31, 2018 11:26 AM By: Kelvin Gawley 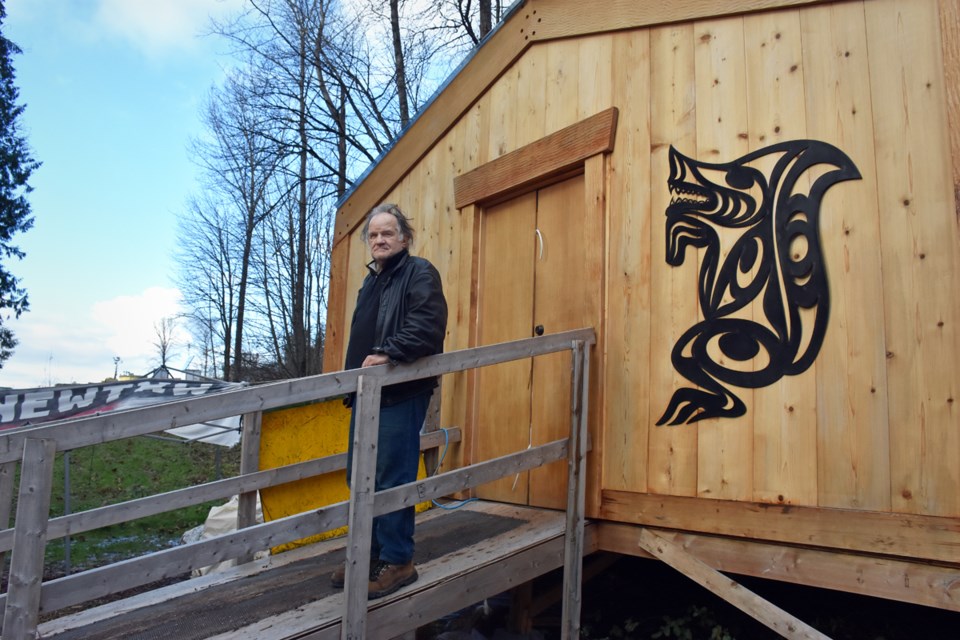 Jim Layden stands outside the Watch House, where he keeps an eye on the nearby Trans Mountain tank farm.Kelvin Gawley

Jim Layden struggles every morning to pull himself out from under his wool duvet and into the cold air of the Watch House on Burnaby Mountain.

It’s a daily ritual he shares with a rotating cast of supporters who spend the night in the wooden structure on the path of the Trans Mountain pipeline. While his compatriots take turns joining Layden, the Cree elder and Sundancer sleeps there almost every night, retreating to his nearby heated van on only the coldest nights.

The pipeline protesters aren’t allowed to have heating or a fire but are persisting in their months-long vigil, keeping tabs on the nearby tank farm and standing in opposition to the planned expansion of the pipeline, which carries diluted bitumen from Alberta.

The Watch House has stood just meters from the outer gate of the tank farm since March, when it was built in Forest Grove Park by members of the Tsleil-Waututh Nation. The cedar building hasn’t moved since, even as the nearby Camp Cloud protest camp was evicted forcefully by Burnaby RCMP and municipal staff.

In September, Will George, a Tsleil-Waututh man designated as a guardian of the Watch House, told the NOW the structure was set to come down following the Federal Court of Appeal ruling that quashed federal approval of the pipeline’s proposed expansion. But that plan changed when it became clear Prime Minister Justin Trudeau planned to move forward with the project – now owned by the federal government.

The nearby support camp, set up in a soccer field, came down voluntarily.

Protests raged on the mountain and at the nearby Westridge Marine Terminal throughout the summer, at times resulting in daily arrests of demonstrators who allegedly violated a court injunction. But the blockades also stopped as the FCA ruling put a halt to the controversial expansion project.

But the Watch House remains.

Layden said he plans to keep sleeping in the cold until it’s time for the building to come down. That will only happen if a court orders its removal or the expansion project is cancelled once and for all, he said.

But it’s not all a frigid slog. Layden said locals regularly bring food and words of support. And a pair of Squamish carvers are working on a totem pole just outside the Watch House.

The pole includes a watchman, the Watch House’s symbol;  a wolf, the totem of the Tsleil-Waututh Nation; and Tahlequah, the mother orca also known as J35 who carried her dead calf for 17 days off the coast of B.C. and Washington this past summer.

“That was her way of saying ‘Look what you’ve done,’” Layden said Sunday.

Layden has been watching and recording work being done by Trans Mountain inside the tank farm fence. While the company maintains all expansion work has been halted and it’s now only doing stand-down and maintenance work, Layden remains skeptical and vigilant.

The watch will continue into the new year and the winter months, he said.