Kinder Morgan is dropping its multimillion-dollar civil suit against all five Burnaby Mountain protesters and is willing to pay their court costs.
Jan 30, 2015 3:55 PM By: Jennifer Moreau 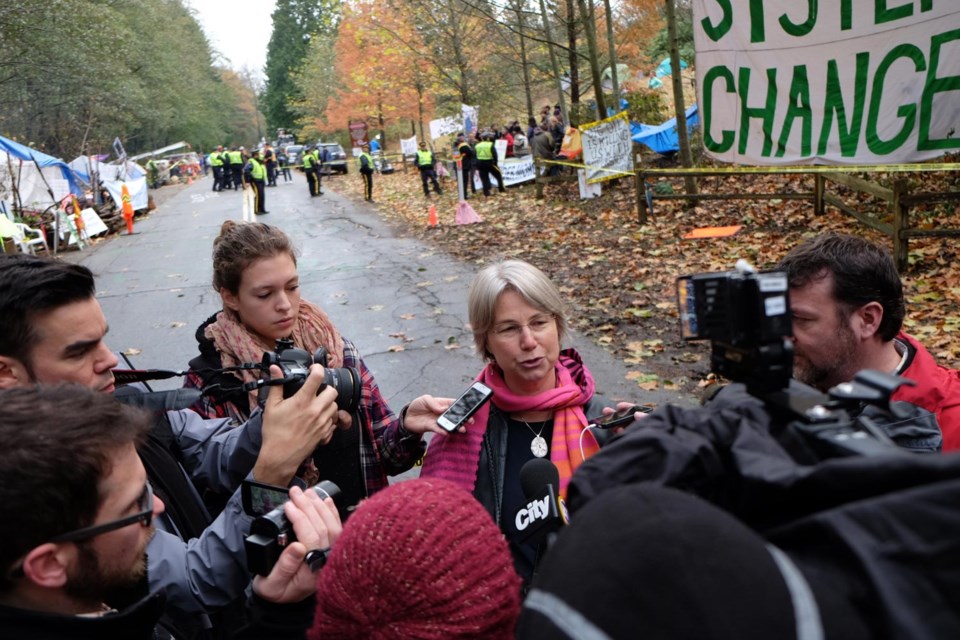 Kinder Morgan is dropping its multimillion-dollar civil suit against all five Burnaby Mountain protesters and is willing to pay their court costs.

Kinder Morgan announced its latest legal move in a Friday-afternoon press release stating the company has filed a "unilateral discontinuance" of the suit that's been hanging over the heads of five protesters.

Stephen Collis, Lynne Quarmby, Alan Dutton, Mia Nissen and Adam Gold were all named in the suit filed when Kinder Morgan sought an injunction to stop people from interfering with survey work for the Trans Mountain pipeline expansion.

Unilateral discontinuance means Kinder Morgan may have to pay the protesters' court costs and the suit will be dropped whether they agree or not.

Jason Gratl, lawyer for Nissen and Gold, said the news was hilarious.

"The timing is not coincidental," said Gratl, who suspected Kinder Morgan would rather pay his clients' court fees than hand over information he requested on Gold and Nissen.

"My clients imposed a (time) limit of Jan. 30 for production of the plaintiff's documents - all documents dealing with the plaintiff's communication with their contractors, including their public relations consultants and their private investigators," Gratl said. "That's what they don't want us to know. They would rather pay costs than provide us with a glimpse into the inner world of Trans Mountain."

Quarmby and Collis, both SFU professors, had already agreed to a discontinuance without costs, meaning neither side could ask the other to pay their court fees. Gratl explained that his clients, Nissen and Gold, wouldn't agree to that, so the suit against them was still active.

Kinder Morgan spokesperson Ali Hounsell had an entirely different take. She said the company was just following up on a promise Kinder Morgan Canada president Ian Anderson made in December, saying the company would drop the suit if the work on Burnaby Mountain was completed.

"Ian had committed very publicly, very quickly, a promise that we would discontinue the proceedings, and we wanted to do that," Hounsell said.

Hounsell pointed out that only two of the five defendants (Quarmby and Collis) agreed to discontinue the suit with no costs.

"The others for whatever reason want to continue to bring this up, and want to continue to drag it out publicly, so instead of waiting for them to sign on, we went this other route," she said. "The down side for us is we could be responsible for court costs, but for us it's a small price to pay. ... This is a way for us to make it crystal clear for everyone that we have no intention of pursing it."

Hounsell also explained that the whole point of the civil suit was to secure an injunction, which the company got for its work on Burnaby Mountain.

"It was a requirement," she said. "We have to demonstrate there is some damage if you don't get this injunction."

While Gold and Nissen wouldn't accept a discontinuance of the suit, Dutton took his case much further. He recently applied to the B.C. Supreme Court to have the suit dismissed, and was hoping to have it declared a SLAPP suit, but the judge rejected his request.

Dutton was gleeful to hear Friday's news and took credit for the company's move.

"It's because of my SLAPP suit (campaign) that Kinder Morgan is running away from this. Regardless of what they are saying, I'm still going to pursue them for costs," he said. "They are not getting off the hook."

Dutton is still planning to launch a campaign calling for the reinstatement of anti-SLAPP suit legislation.

"There's a principle at stake. It's not about me, it's about Charter rights," he said.

Quarmby was also happy to hear the news.

"I'm elated, and I think that this is an entirely appropriate response, and I'm just relieved for all of the defendants," she said.