Six Burnaby roads will be a bit narrower, as lanes are closed to accommodate physical distancing among pedestrians during the COVID-19 pandemic.
Jun 3, 2020 9:27 AM By: Dustin Godfrey 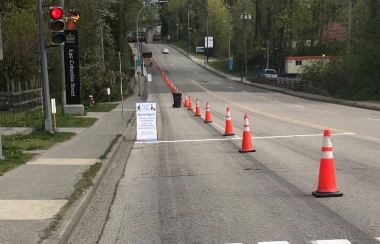 Six Burnaby roads will be a bit narrower, as lanes are closed to accommodate physical distancing among pedestrians during the COVID-19 pandemic.

While people have largely been asked to stay home since mid-March, that’s been changing over the past few weeks. Both the province and the city have unveiled plans for opening up and getting the economy – and the people within it – moving again.

That being said, people are still being asked to try to keep two metres between themselves and others not in their “bubble” to cut down on the spread of the virus. For a few weeks, now, daily new confirmed cases in B.C. have remained mostly below 10 after spending a considerable amount of time in the upper double-digits and briefly hitting over 100.

In an effort to allow people to get out into the community, while still curbing the transmission of the virus, city staff proposed closing vehicle lanes in several areas around the city.

“As a result of physical-distancing requirements, existing sidewalks and multi-use paths are not able to safely accommodate as many people as previously,” staff wrote in a report to council.

Council approved closures along Kingsway, between Patterson and Royal Oak; on Edmonds Street, between Kingsway and Canada Way; Gatineau Place, from Austin Road to North Road; Hastings Street, from Boundary to Gamma; Gilmore Avenue, from Dawson to Still Creek; and Still Creek Drive/Avenue, from Willingdon to Douglas.

Staff also offered 16 other locations for potential future closures. Staff said the sites were chosen based on past observations of where there has been high pedestrian traffic. Staff primarily looked at areas around civic and community facilities, near parks, commercial areas, transit stations and stops, and businesses that require people to queue outside.

“The list is not exhaustive nor intended to be exclusive. The city will need to be flexible given the unprecedented conditions and sometimes unanticipated consequences of pandemic recovery requirements,” staff wrote.

Some of the suggestions were along TransLink’s major road network, which requires TransLink approval to close a lane. But the transit authority has indicated it would like to work with cities on this issue, staff said.

“I believe the attempt to share laneways, roadways, some open spaces, sidewalks will support the opening of the economy, getting people out of their homes after three months of basically (being) indoors,” said Coun. Sav Dhaliwal. “So this is really important.”