'Life dropped me back into flour'

It’s sometimes hard to keep up with fast-talking baker Mark Tsemak, but if your ears are quick enough, you’ll hear the story behind his food production company Red Square, the authentic Russian kitchen turned “healing food manufacturer.
Jun 30, 2014 9:43 AM By: Jacob Zinn 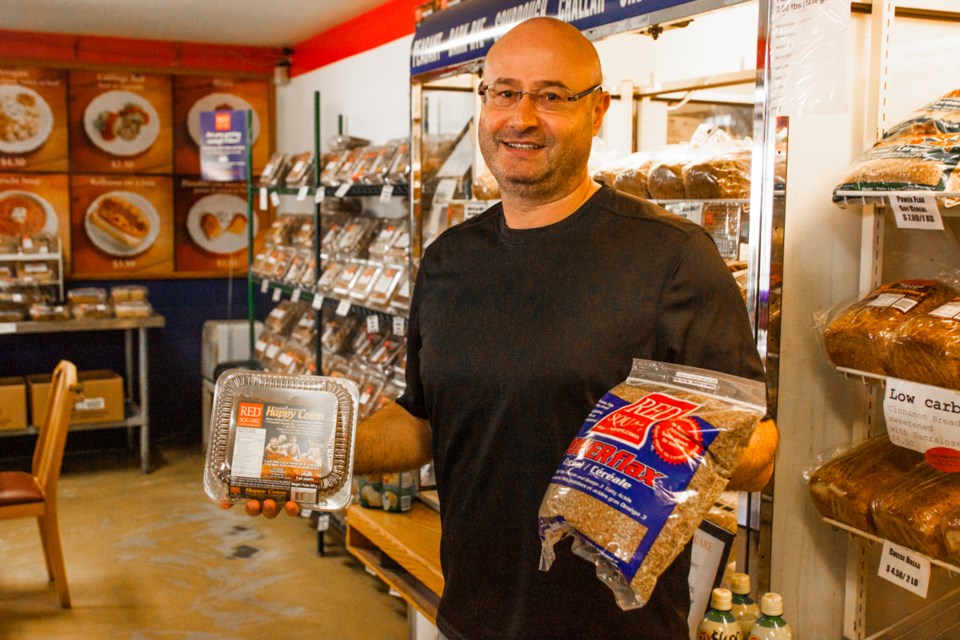 Red Square owner Mark Tsemak started cooking with his parents – then he started cooking for his parents. In an interview with the NOW, he shared the history of their family-run business and how preparing authentic Russian dishes led to the niche market of flax-heavy health foods.Jacob Zinn

What began as a modest 800-square-foot store in North Vancouver has since ballooned over the last 24 years to a large South Burnaby warehouse that ships its high-fibre, low-carbohydrate products across Canada and the United States. Not bad for a young man who was lucky to have been let out of the Soviet Union in the late ’70s.

On Dec. 5, 1979, Tsemak and his family emigrated from Eastern Europe with $90 each in their pockets and nothing else, after waiting four-and-a-half months for their visas. Given the choice between America and Canada, they sought the freedom of the Great White North and the Canadian Dream.

“I figured if I wanted to pass the TOEFL (Test of English as a Foreign Language) test, I’d better start getting some vocabulary,” he said, noting he challenged himself to memorize 60 English words per day.

“At first, you speak as much as Canadians learn French here: nothing,” he said with a laugh.

While attending university, Tsemak pooled some money with his parents to open the Stanley Squirrel, a confectionary store in downtown Vancouver that proved profitable and allowed him to finish his studies.

Through working in the food industry, the Tsemaks recognized a lack of Russian fare amid Asian, Greek and Italian restaurants on every corner. In response, they sold the Squirrel and, in 1990, started Perestroika Products, serving up piroshki (a baked yeast-dough roll stuffed with potato, onion, broccoli and spinach), vareniki (bite-size dumplings) and vegetarian borscht.

They cracked into a niche market, forcing Tsemak, who had left the cooking industry for construction work, to return and assist his aging parents in their North Vancouver kitchen.

“Life dropped me back into flour, where I started my career,” he said. “I used to get up at five, go to Perestroika in North Van, pick up boxes of piroshki, put them in my car and drive to three or four Costcos delivering in the morning.

Perestroika soon moved to the southwest corner of Burnaby because of its centrality in the Lower Mainland – taking on the name Red Square for its part-warehouse, part-retail location – and Tsemak quit his construction work to focus on the family business.

If you spend five minutes talking to Tsemak today, he’ll surely tout the health benefits of flax, but it took a health scare in the family for him to realize the true positives with the crop.

“My mom suffered a massive stroke from high blood pressure,” recalled Tsemak. “She collapsed and she was paralyzed on one side.”

“I started pushing myself, what can I come up with (to make her better)? We started concentrating on the idea that food is medicine.”

Through research, Tsemak discovered that flax can thin the blood, which can allow more oxygen to the brain to potentially regain motor skills in stroke victims. He put his mom on a flax-heavy diet, and steadily, her health improved.

“That was the awakening for me to look at my future,” he said, realized the same thing could happen to him back then. “I was already a bit overweight – eating and working basically was my life.”

Sooner or later, doctors started sending their patients with diabetes, high cholesterol and other ailments to Red Square, and Tsemak gained the added bonus of enriching others’ lives.

“What I’ve learned over the years is that there’s nothing better than helping each other to achieve better health, better lifestyles,” said Tsemak. “We produce from the heart to solve somebody’s problem.”

The shelves of his retail store are lined with bread, pizzas, cakes, energy bars, cinnamon buns and chocolates – and they’re healthy, thanks to him stumbling upon the benefits of flax so many years ago.

It’s not just a family business – it’s a business helping families, and that means more to him than anything.

“I’m probably now the richest man on the planet – not in terms of materialistic values but, my mom gave me life, and together, we rebuilt her life. And I’ve helped many other Canadians rebuild their health. It’s priceless.”

Ex-boyfriend who murdered Burnaby's Nicole Porciello not eligible for parole for 15 years
Apr 14, 2021 9:11 AM
Comments