Paul Natrall is one of nine chefs taking part in the nationwide Indigenous campaign to help feed people in need this holiday season
Dec 12, 2020 3:00 PM By: Elisia Seeber 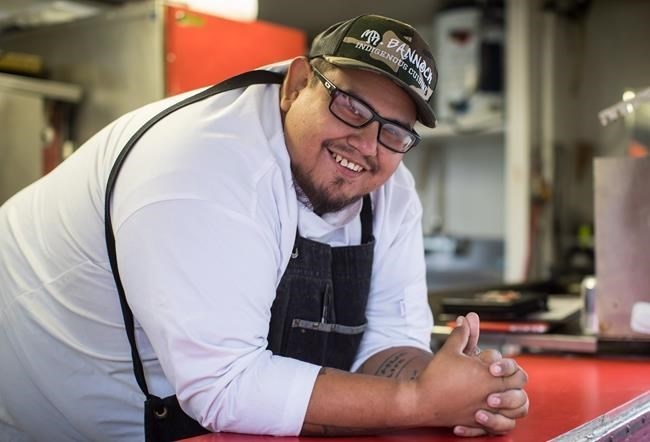 Indigenous chefs across Canada will soon be busy preparing traditional meal kits to distribute to Indigenous families and community members in need this holiday season.

Squamish Nation chef Paul Natrall, who owns the popular Mr. Bannock food truck and catering business, is one of them, and he’s hoping North Vancouver will show a little love to the new campaign he’s a part of.

This month, the Indigenous Culinary of Associated Nations launched its Indigenous Feast Boxes GoFundMe campaign to support Indigenous chefs and businesses across Canada with the goal of helping feed Indigenous families and community members in need over the holidays.

Natrall, who sits on the board of directors for ICAN, said the goal is to fundraise $60,000 to have enough funds to split between nine chefs and their teams to create their Feast Boxes to hand out.

“That would give a big budget to really showcase our Indigenous food culture and feed people in need,” he said.

“Every Canadian and everybody around the world is struggling right now, not just businesses, and if we can bring a little bit of nourishment to our community with a meal, then it’s just awesome to be a part of that and to show them what we do as chefs at this level.”

Each chef will be using local ingredients and each box's contents will be inspired by their Indigenous heritage with a contemporary flair. It’s hoped each box will be valued at a minimum of $50 each and will be enough to feed a group of four to six people.

Natrall, who's known for his Indigenous fusion street food, said he still hadn’t quite decided what would be featured in his Feast Box, but mentioned root vegetables would be included.

“It’s super exciting because Indigenous food culture is not just one thing – we have Indigenous chefs across the country, and each chef is going to be doing something different,” he said.

“There’s going to be different flavours and textures."

“Even with Salmon and Bannock [in Vancouver], chef Inez Cook is from up north, and I’m from Squamish Nation here, it’s both Indigenous cuisines, but it’s going to be different flavours because it’s different regions of the province.”

The campaign allows Indigenous chefs to share traditional foods that are often expensive or not quite mainstream yet, explained Natrall.

“Deer, elk, bison – it’s not cheap, by any means,” he said. “In our Indigenous communities, we used to have hunters who would bring this food to us … so it’s awesome to get back to those roots and share some of our traditional foods with our communities.”

The award-winning chef took part in a similar meal-kit initiative during summer and distributed 100 Feast Boxes to Squamish and Tsleil-Waututh First Nations as well as the Vancouver Women’s Shelter.

“I completed my first one in June, and it’s just a way for us to give back to our Indigenous communities and feed our people but also keep our kitchen and our community working,” he said.

For this campaign, he's partnered with the Dudes Club, who will be distributing the Mr. Bannock Feast Boxes.

Natrall hopes the winter campaign will go even further than the last, having known what it’s like to struggle himself.

“I was a single dad of five kids, and I definitely would appreciate when people would share a meal with me, I know how the struggle was and still is for a lot of people.

“There’s about a week left for people to donate and help really give back to our communities during this time.”

Joseph Shawana, ICAN board chair, said when COVID-19 hit and all the Taste of the Nations events got cancelled, the group decided to redirect those efforts by funding $25,000 for the creation and distribution of the Indigenous Feast Boxes.

“These are truly unprecedented times for our Indigenous brothers and sisters, and ICAN is very pleased to be in a position to lead such an important campaign to provide much-needed assistance,” he said.

The campaign is being shared via GoFundMe and will run until Dec. 18.