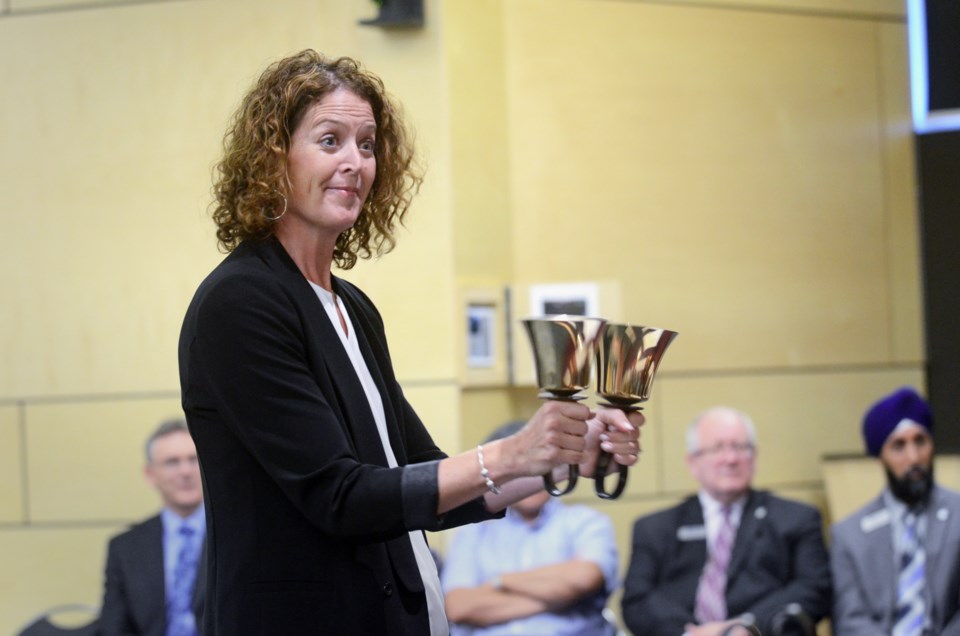 “I started typing up the citation and it was getting to 700 words, and then I looked at the criteria for the nomination,” Minichiello said. “It said, under 200 words, and I went, ‘Oh my word!’ so I went back to my doc, and there was no way I could do it, so I did a point-by-point summary that came in under 200 words. That’s how overqualified she is. … She is the intent of the award, basically.”

The provincial association agreed, and this week Nordstrand found out she had won the honour, which will be presented to her at the B.C. Music Educators Association’s AGM on Oct. 22.

For 21 years in the Burnaby school district and three years before that in Saskatoon, Nordstrand has worked to teach skills and spark a love of music in her young charges, who move through her room at a rate of about 200 a day.

How has she kept it up?

“Music gives me life,” she told the NOW. “It brings me joy and so it gives me an energy. It’s the end of the day before I know it.”

But the provincial award is as much about Nordstrand’s work as a music leader outside of the classroom as it is about her day job.

At the district level, she has conducted the district Sound Wave Handbell Choir for 15 years. She presents district workshops on music education through handbells and has coordinated Ring Out!, an annual weekend of student workshops under the auspices of the B.C. Guild of English Handbell Ringers.

Provincially, Nordstrand has presented workshops at the B.C. Music Educators Association’s conferences and served on the executive of the B.C. Guild of English Handbell Ringers.

This summer, she led fundraising efforts that allowed eight of her Sound Wave ringers to attend the 17th International Handbell Symposium in Vancouver, where Nordstrand herself presented a workshop and guest conducted a massed choir of more than 650 ringers.

With such a breath of teaching and leadership activities, Minichiello said rounding up colleagues, a parent and a former student to provide their enthusiastic support for Nordstrand’s award nomination was a breeze.

“She invites the best her students have to offer,” Minichiello wrote in her nomination form. “Her skilled leadership guarantees children music education that will last throughout their lives. Her school music program inspires devotion to music as well as lasting admiration for Janet herself.”