New homeless strategy could leave seniors out in the cold

A Burnaby seniors’ advocate is concerned about a new funding model that could leave homeless seniors out on the streets for months before they are eligible for help.
Jan 8, 2015 2:21 PM By: Jennifer Moreau 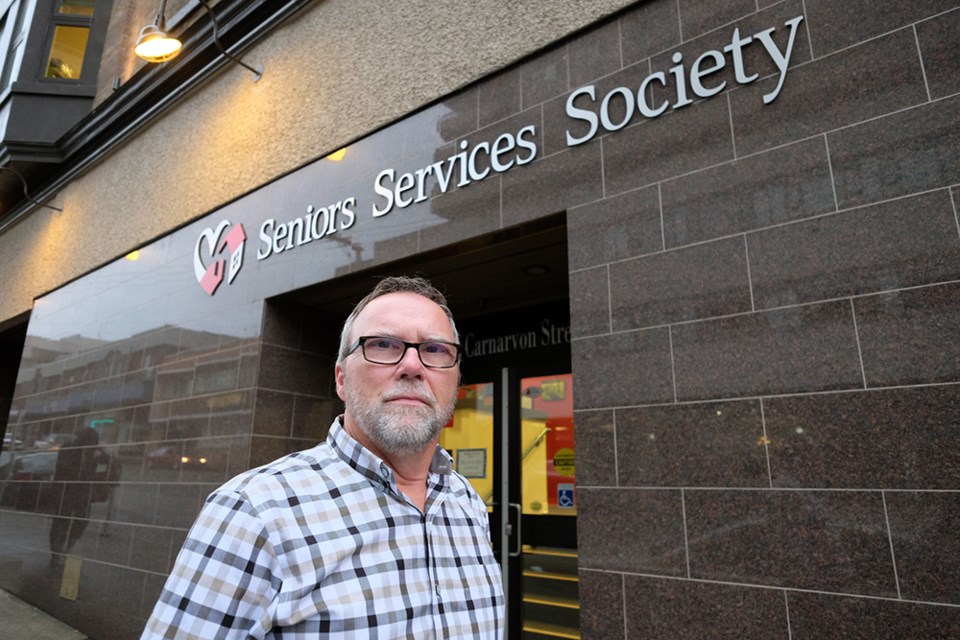 Overlooked: Brian Dodd, the interim executive director at Seniors Services Society, is worried seniors will be left on the streets for months before they qualify for help under the government’s new homelessness strategy.Larry Wright

A Burnaby seniors’ advocate is concerned about a new funding model that could leave homeless seniors out on the streets for months before they are eligible for help.

Elsie Dean, an active member of Voices of Burnaby Seniors, is raising questions about the federal government’s new Housing First funding model, which focuses funding on people who are homeless for six months or more. That leaves less funding available for seniors who are homeless for the first time.

“That’s a little ridiculous. How many days do they have to be on the street before there could be funding for them?” Dean asked.

The Housing First funding model is meant to help the chronically homeless, who often have mental illnesses and addictions and can cost the government more money through increased demand on social services. Housing First is a model that’s proven to work, according to a recent study by the Mental Health Commission of Canada, but since the funding is coming out of the regular pool for homelessness programs, there’s less money available for seniors who may be facing life on the streets for the first time.

Voices of Burnaby Seniors, a community-based planning table that addresses seniors’ issues, is going to look into homelessness and seniors, which Dean said is a growing problem in Burnaby. Dean pointed to Metrotown apartments being torn down to make way for new highrises or remodelled, while seniors are moving out, no longer able to afford rent. According to Dean, many seniors live on annual incomes of about $20,000 to $30,000.

“The whole thing is exploding and creating more homelessness. … They are very stable homes some people have been living in for many years, and they can’t afford to live there anymore,” she said. “So where do they go? There’s very few low-cost housing, because the government hasn’t built any in 10, 15 years, not in the sense as they used to, … and Burnaby doesn’t have any shelters. Burnaby council objects to getting land for shelters, rather than housing. It’s a really bad situation. The federal government is not putting up any money for building affordable housing, I understand.”

Dean would like to see programs that offer seniors stable, permanent housing.

“We foresee seniors and homelessness becoming a big issue in 2015,” Dodd told the NOW. “The majority of seniors we are dealing with are first-time homeless, so the funding and the programs are not available for us to assist them in moving forward. I’m calling it a crisis.”

Seniors Services Society is the only group that specifically helps seniors (55 or older) throughout the Lower Mainland, including Burnaby, who are homeless or at risk of homelessness. According to Dodd, about 80 per cent of the organization’s clients from the past year would not meet the new Housing First criteria, because they are homeless for the first time. Dodd is concerned seniors will have to stay out on the streets for six months before they qualify for help.

Sixty-five per cent of the government’s annual $8.2 million in funding for homelessness in Metro Vancouver is earmarked for Housing First, meaning the money goes to helping people who are chronically or episodically homeless. Organizations working with the homeless were given till April 2015 to “align” with the new Housing First funding criteria. The government defines “chronically” homeless as people with mental illnesses or addictions who have been homeless for six months or more, while “episodically” means people who have been homeless three times in the past year.

To make matters worse, Dodd says the number of homeless seniors is increasing as the baby-boomer generation ages. The 2008 Metro Vancouver Homeless Count, found 212 homeless seniors. In 2011, that number rose to 268, and then in 2014 hit 371.

“We know this is a gross undercount, because there are a lot of people in the category we call hidden homeless,” Dodd said.

For more on this story, see an extended version online at www.burnabynow.com.

Ex-girlfriend to testify via CCTV against former BC Lion accused in Burnaby murder
Jan 26, 2021 3:42 PM
Comments