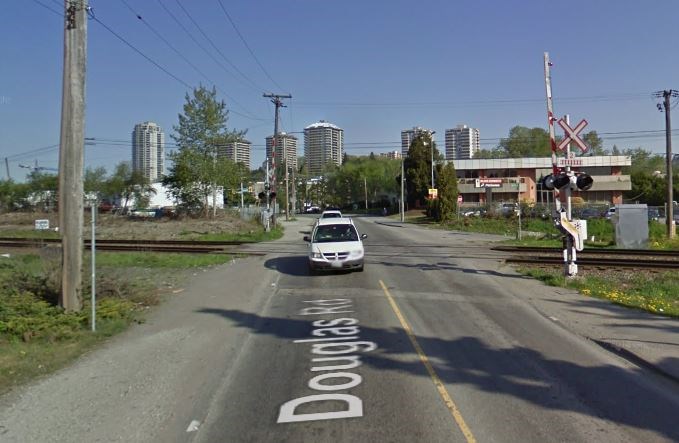 A railway crossing where trains back up traffic on Burnaby’s Douglas Road dozens of times a day will be closed once a new overpass is built as part of a $145 million infrastructure project.

Burnaby city council approved a memorandum of understanding with the Vancouver Fraser Port Authority (VFPA) this week, allowing design work to begin for a new four-lane overpass over the Burlington Northern Sante Fe tracks near Holdom.

Once complete, the project will improve north-south mobility in the city by eliminating the need to wait for trains to pass, according to a city report.

The overpass is part of a large suite of rail infrastructure improvements in the region as part of Gateway 2030, a joint project of VFPA, Transport Canada, BC Ministry of Transportation and Infrastructure, TransLink and the Greater Vancouver Gateway Council.

The City of Burnaby won’t have to pay for the construction of the overpass but will own it and be responsible for its maintenance once it’s complete (expected in June 2024).

Burnaby councillors said they were happy to see a construction plan for an overpass that has long been part of the city’s transportation infrastructure plan – but they also expressed concerns about the impacts of the associated rail projects.

A new third track will be built parallel to existing lines in the Holdom area to allow for trains to pass or queue and allow for more trains to pass through Burnaby, according to the staff report.

“This will mean more frequent noise and emissions in the area,” the report notes. “However, these impacts would still be less than if those same goods passed through the city by truck.”

The construction of the overpass will also require trains waiting to enter the Thornton Tunnel – which runs 3.4 kilometres under Burnaby from the Second Narrows Bridge to the BNSF track – to move westward towards Willingdon. This will bring the loud shunting noises when those trains stop and start closer to residential developments in Brentwood Town Centre, according to the report.

“The magnitude and extent of these effects is not yet known, nor has it been determined whether or not it is possible to mitigate them,” the report says.