Newsmaker of the year: Jane Shin 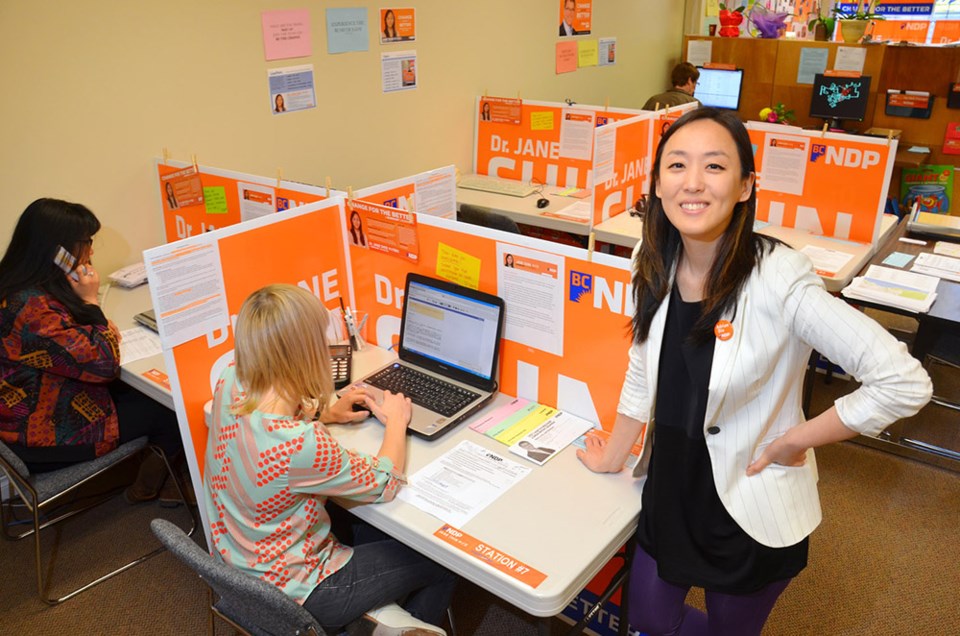 Disappearing act: Burnaby-Lougheed MLA Jane Shin in the lead-up to the May 14 election. Shin’s campaign was plagued with controversy, and she was unavailable for comment in the weeks leading up to the election and for a short time afterwards.

Looking back over 2013, there was one local figure who rose above the rest when it came to controversy and drama: Burnaby’s newest MLA, Jane Shin.
The NDP announced Jane Shin’s candidacy for the Burnaby-Lougheed riding in fall 2012 and described as follows: “Educated in genetics and cell biology at University of British Columbia, Jane went on to receive her medical doctorate in 2007,” and “Dr. Shin has acquired a diverse set of skills and insight through her work as a physician.”
As spring rolled around, there were serious questions circulating about her professional background. Acting on an anonymous tip, the Liberals started monitoring Shin and her changing online biographies. Shin seemed to take the duck-and-cover approach and was increasingly difficult to get on the phone for an explanation.
As questions rose about Shin’s education, someone dug up an offensive comment she made on online more than a decade ago, saying she was fed up with the “chinkasauruses roaming about Vancouver.” This time, Vancouver MLA Jenny Kwan jumped to her defence and the NDP stood behind her, but Shin was still unavailable by phone.
As it turned out, Shin did have a medical degree (from a Caribbean school, not UBC) which technically allows her to use the doctor title, like anyone with a PhD. However, she has never practised and did not complete her residency, and she does not have a licence to practice in B.C.
The anger around Shin’s campaign seemed to cross party lines and spread through the Lower Mainland Korean community. Some New Democrats, however, were defensive of Shin, criticizing the controversy as a Liberal conspiracy.
The most bizarre twist came on election night, May 14, when Shin pulled a disappearing act. NOW reporter Jennifer Moreau stopped by Shin’s office, but the lights were out and the door was locked even though she had made a plan to meet the team there.
When the results came in, and it was clear Shin had won, she was still unavailable for comment and nowhere to be found.
Shin’s duck-and-cover tactic was backfiring, as NOW readers became increasingly irritated with her silence. It took some arm-twisting of certain NDP folks to finally get Shin on the phone, and by this time, her strange behaviour was making national headlines. Ten days after the election, the NOW ran Shin’s explanation when other media outlets were still having a hard time getting a hold of her. Shin chocked the confusion up to “misspoken points,” “misquotes” and “translation errors.”
Shin has since moved to the Burnaby-Lougheed riding (a good gesture, we think), but  trust is a difficult thing to rebuild once broken. While Shin has done a good job of staying out of trouble lately, it may take a while before Burnaby-Lougheed residents can put faith in her.
Here’s to a fresh start in the new year.