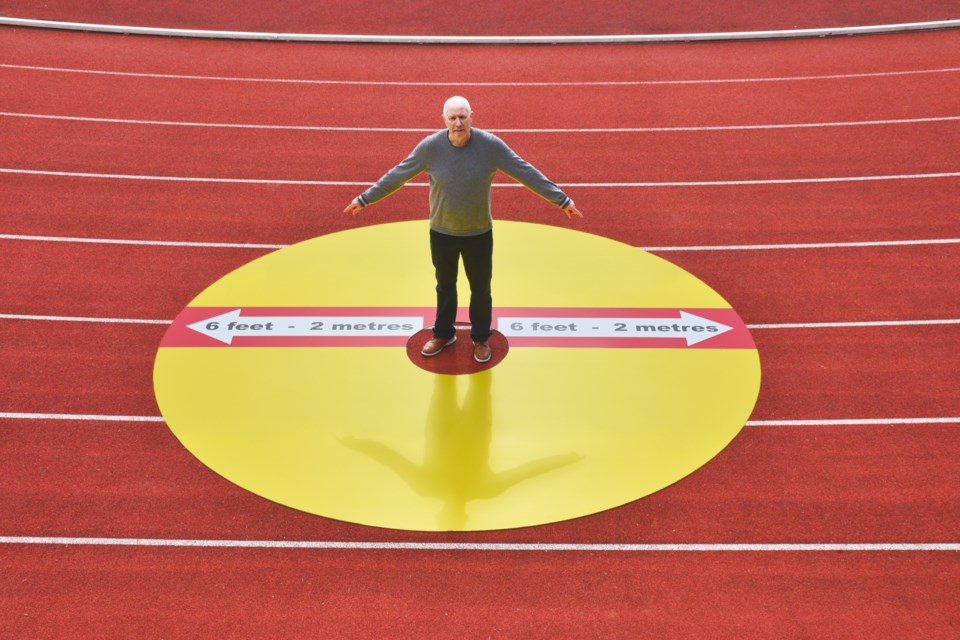 Mayor Mike Hurley demonstrates social distancing at Burnaby Central Secondary School's track. This prop will make its way to various Burnaby parks to demonstrate the distance you should keep between yourself and others.City of Burnaby

The City of Burnaby likely won’t be closing any of its parks to slow the spread of COVID-19, Mayor Mike Hurley says, even as Metro Vancouver closed one of its parks in the region.

A likely next step, Hurley said, would be to close parking lots for parks if it becomes too difficult to enforce social distancing, a move the City of Vancouver recently made to discourage too many visitors at the city’s green spaces.

“We feel it’s important that our parks stay open. People need somewhere to get out and be healthy,” Hurley said. “We need to impress on people that, while you’re in a park, please observe those distances.”

Health officials recommend people stay at least two metres (about six feet), the approximate distance droplets of water can travel in a sneeze or cough, away from others.

Hurley offered a demonstration this week of a two-metre radius by standing in the centre of a four-metre diameter circle at the Burnaby Central Secondary School’s track. (See above.)

“It’s quite surprising when you see it laid out how far it actually is,” Hurley said.

He added the city will be taking the prop to various parks as a demonstration of social distancing.

The regional district said it has been monitoring parks, including Burnaby Lake Park, the largest in the city.

“We have over 12 million visitors to our parks annually. We’re monitoring volume in our parks, and we’re monitoring behaviour, and staff are there to remind the public of the rules,” said Metro Vancouver CAO Jerry Dobrovolny at a news conference.

“If it’s not a situation that we feel is safe for the public, then we will certainly close the parks. … I want to stress our goal is to keep our parks open, period. We think it’s really important, especially in the dense parts of the city, (so) people have the ability to get fresh air and get outside.”

More than 60% of Metro Vancouver’s parks were seeing above-normal volumes of visitors during the warm, sunny weather of the last week, Dobrovolny said. Hurley, too, noted that Deer Lake Park had received a multitude of visitors recently.

“That can be OK, as long as people are following the very simple rules,” Dobrovolny said.