Burnaby resident warning of implications of these mini-hotels
Feb 20, 2021 5:58 AM By: Chris Campbell 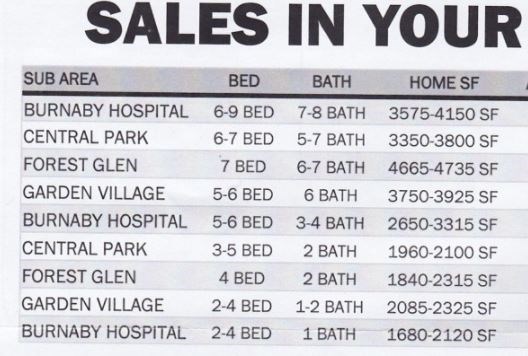 How many rooms can you cram into one house?Screenshot

As hot Burnaby housing sales continue to scorch the hands of buyers, sellers and real estate agents, there’s a sneaky and troubling trend taking place with some of the listings.

Some agents are luring in buyers with the concept of turning single-detached houses into mini-hotels through such sites as Airbnb.

A reader named Hugh sent me a real estate flyer that he received in the mail the other day.

It lists properties that either do or could have up to nine bedrooms and three kitchens and eight bathrooms. As the screenshot shows, it gives estimates about how many rooms you can cram into your house – not for family, but for either illegal renters or Airbnb users.

“These are not apartment properties, they are single house properties,” said Hugh. “If they are sold as potential mini-apartment blocks, you can bet your boots that some, if not most will become two floors of bedrooms. All that you have to do is drive by new duplexes and look at the nice ‘balconies’ and if you drive by a few months later, you'll see the balcony spaces filled in to enclose another room. I'm not a NIMBY. Every single-family house on my block has an illegal suite in it. I just accept that as a fact of life. However, the potential being sold in my neighbourhood is going way over the line and Burnaby Council has to be aware of it. That's why real estate sales and development people love them.”

How hot is the Burnaby real estate market?

From October to December 2020, detached housing sales in Burnaby skyrocketed 28% compared to the same three months in 2019, according to the latest data from the Real Estate Board of Greater Vancouver (REBGV). Sales of attached homes, such as townhouses, jumped 27% during the same period.

Residential sales surged 53.4% year over year last month to a hit a new all-time record in the region, according to the REBGV.

The latest gains were 57.7% above the 10-year December sales average.

This decline comes after different levels of government began introducing measures to cool down white-hot markets in Vancouver and Toronto.

But the pandemic has brought on measures from the Bank of Canada to keep the economy chugging, including record-low interest rates.

The benchmark price for all residential properties, including condos and detached homes, across Metro Vancouver reached $1,047,400 by the end of 2020.

Opinion: Forget about a second bedroom with these skyrocketing Burnaby rents
Feb 17, 2021 12:59 PM