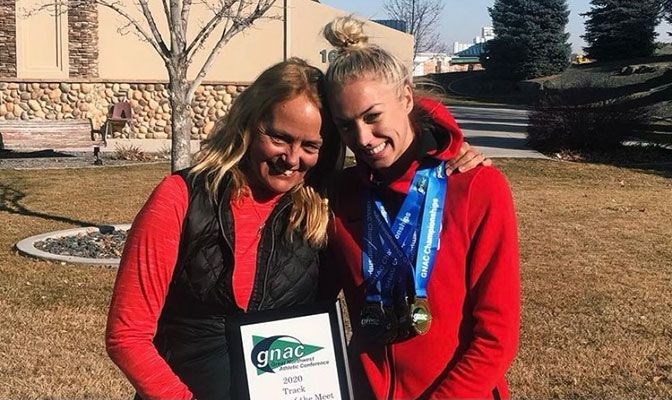 Brit and Addy Townsend following the 2020 GNAC Indoor Track & Field Championships. Addy won both the 800 meters and mile and was named the Women's Track Athlete of the Meet.Submitted

When your mother is your coach, it takes more than a pandemic to slow you down.

Such is the case for Burnaby Simon Fraser senior middle-distance standout Addy Townsend, whose mother, Brit Townsend, is the head coach of the school’s cross country and track and field programs.

“Surprisingly, we have been able to keep our training up and had good intensity over the last nine months,” Brit said. “Of course it’s been different because there haven’t been competitions. We’ve tried to make everything as normal as possible in training. It went surprisingly well.”

It might have been the best medicine for Addy, who was running the best times of her career when the COVID-19 pandemic brought a sudden end to the 2020 season while she was at the Division II Indoor Track and Field Championships. She is taking the changes in stride.

“Other than the disappointing cancellation of indoors, we have just continued training and working on trying to be better for when the first moment to compete comes,” Addy said. “That’s what we’re trying to do every day is just always being ready for when something comes up.”

It is simply the latest chapter of a successful relationship between the two that has seen Addy rise to the heights of her sport. An eight-time GNAC indoor champion and five-time champion outdoors, Addy was the national runner-up in the 1,500 meters at the 2018 Division II Outdoor Championships and placed fourth in the 800 meters at the 2017 Division II Indoor Championships. Her five indoor All-American awards are the third-most in conference history.

Addy is following in the footsteps of Brit, who was a national champion in the 800 meters for Simon Fraser in the 1980s. Success on the track runs in the family.

THE FAMILY BUSINESS
Do a Google search to learn about Brit Townsend’s international track and field career and you will need to do a bit of digging.

The opening paragraph of her biography on the Simon Fraser website lists some of the international events she competed in and notes that she “earned multiple international medals while also previously holding seven Canadian records.”

While Brit’s successes were far from a secret in the Townsend household, it was not until she grew older that Addy truly appreciated Brit’s pedigree as an athlete and coach.

Despite mother’s world-class success, it was never a given that Addy or her sister, Dana, would follow along and join Brit in the family business.

“Maybe it was her thought,” Addy laughs, explaining that she was as good of a soccer player in high school as she was a runner.

“I was really into soccer right up until my senior year in high school,” Addy said. “I had lots of fun in soccer. I didn’t compete in track my senior year and I got to fulfill the dreams I had for soccer. We went to the high school championships and we ended up winning. It closed that door and I think I needed that to realize how much I had missed competing (in track) that last year of high school.

Brit encouraged both of her daughters to compete in as many sports as possible. The list included gymnastics, basketball and soccer. But she always made sure that there was a running component to their training, simply for the fact that it was good training.

Brit also believes that you gravitate toward activities that you have natural ability in, which ultimately led Addy to the track.

“In many team sports, you are depending on someone else to select you for that next level,” Brit said. “In track, if you train hard and work hard, and this has shown for Addy, she can be rewarded. I think that is part of the reason that she ended up in track as well.

“And she was also very good at it.”

It didn’t hurt that, thanks to Brit’s coaching duties, Addy grew up around the track circling Terry Fox Field. She recalls looking up to former Simon Fraser athletes and Canadian Olympians Jessica Smith and Lindsey Butterworth as they led SFU into prominence in the NCAA following the school’s transition to Division II.

“It’s crazy to think of the full circle that I was watching them when I was young and thinking, ‘Oh my gosh, she is so much older than me and so amazing. I can’t believe that she is doing all of that training,’” Addy said. “Now I am doing the same thing. It is so weird how time flies.”

With the collegiate season put on hold during the COVID-19 pandemic, Addy spent much of her spring and summer training with Butterworth, who is also employed as the athletic department’s NCAA student program coordinator. The duo raced in a pair of competitions in Quebec in August, with Addy turning in a lifetime best time 2:06.04 in the 800 meters.

“They certainly support each other and help each other in different ways,” said Brit, who continues to coach Butterworth. “It’s great for Addy to see Lindsey’s talent, her composure, the way that she approaches competition and training. So it has helped both of them.”

THE FAMILY DYNAMIC
After missing her senior high school season on the track, Addy was more than ready to get after it in her freshman year at Simon Fraser.

Both Addy and Brit admit that there was a bit of a transition period at the start in defining where the mother/daughter relationship ended and the coach/athlete relationship began.

“At the start, I would look to her and hope ‘Oh, maybe she won’t have me run this last set because I am so tired,’” Addy said. “Now I just try to call her Coach at practice and go along with everyone else.”

From the start, Brit worked to set the same expectations of Addy as she did of all of her other Simon Fraser athletes. She would do the same workouts. She had to abide by the same rules.

Those rules included separating home and track as much as possible.

“We have an expectation that if we have an issue, we aren’t going to argue about it at practice,” Brit said. “If they have something that they are not happy with then it needs to be talked about away from the other athletes. But that’s also something I do with all of my athletes.”

Overall, according to Brit, both Addy and Dana before her did a good job of keeping family matters and athletics matters separate. She is especially proud of the fact that both developed into team leaders, working to mentor younger athletes in addition to pursuing their own goals.

“They were really good. They were great team people. They were leaders,” Brit said. “They respected my knowledge and me as a coach, which was helpful.”

With the pandemic changing everything, Brit said that the line has blurred a bit between home and track. The talk around the house trends more toward training, competition and what the next steps will be.

“It is a bit different for Addy now because we do talk about it at home, her goals and what we need to do,” Brit said.

THE FAMILY THAT RUNS TOGETHER…
As she has progressed through her Simon Fraser career, Addy has never taken for granted having her mother there for every step of the journey.

“It’s a lot of fun,” Addy said. “It makes me feel way more comfortable going out there, warming up and she can be right there giving me good advice right before the race. When I do well it is double the excitement because we are both excited and know that we’ve accomplished it together.”

While having Brit alongside is great for the good times, it is even more important for the tough times.

Such was the case in 2020 when both mother and daughter experienced both the highs and lows.

At February’s GNAC Indoor Track and Field Championships, Addy had what Brit believes was one of her best overall meets. On the first day, Addy ran the leadoff leg as Simon Fraser took a convincing 13-second victory in the distance medley relay. On the second day, Addy surged over the final lap to win her first title in the mile and capped her meet with a four-second win in the 800 meters, her fourth GNAC championship in the event.

“That meet was particularly exceptional as far as her composure and mental stability throughout all of those races,” Brit said. “She went out like a different person. She went out and led those races with confidence and achieves all of those goals and, in between the races, kept her mind together. She was there for business and she was going to get the job done.”

Addy entered the 800 meters at the Division II Indoor Championships with the division’s second-fastest time. This time, Brit was there to offer consolation. The last chance for an indoor national championship trophy was wiped out due to COVID-19.

“It hit me really hard,” Brit said. “I knew that Addy was ready and I felt very confident that she could compete for the championship.”

“I was running personal bests. I was feeling super confident,” Addy said. “It was a time when I was really ready for it and everyone around me knew that. Having her support was really needed on that trip.”

Both Addy and Brit are hopeful for an outdoor track and field season in 2021, which both believe is important for Addy’s progression as a runner. If COVID-19 keeps the season from happening, however, both are looking ahead for what needs to happen next.

“(Addy) believes that the NCAA experience is really important, it’s an important stepping stone,” Brit said. “I believe it as well but, as an athlete, you need to learn to adapt and if it doesn’t happen for some reason we are going to find ways to develop those other areas of training.”

Like her mother, Addy has dreams of representing Canada at the Olympic Games. With an Olympic-caliber coach and Olympic-caliber training partners, there is no question that she has the tools, the support and the training to make the dream a reality.

“All I need to do is focus on the process to get me there, continue to train and have great experiences and continue to run faster,” Addy said. “I think we are pretty good at taking advantage of every opportunity. Traveling to places to try and get into a fast race, continuing to train when maybe I don’t want to, making sacrifices. It’s definitely a goal.”

Brit is not concerned about Addy’s training. It is the racing that will move her to the next level.

“The one thing we need is competitions and believing that we can run with people that are way faster than us,” Brit said. “We will look for those opportunities over the next year or two and I know that she will rise to the occasion.”