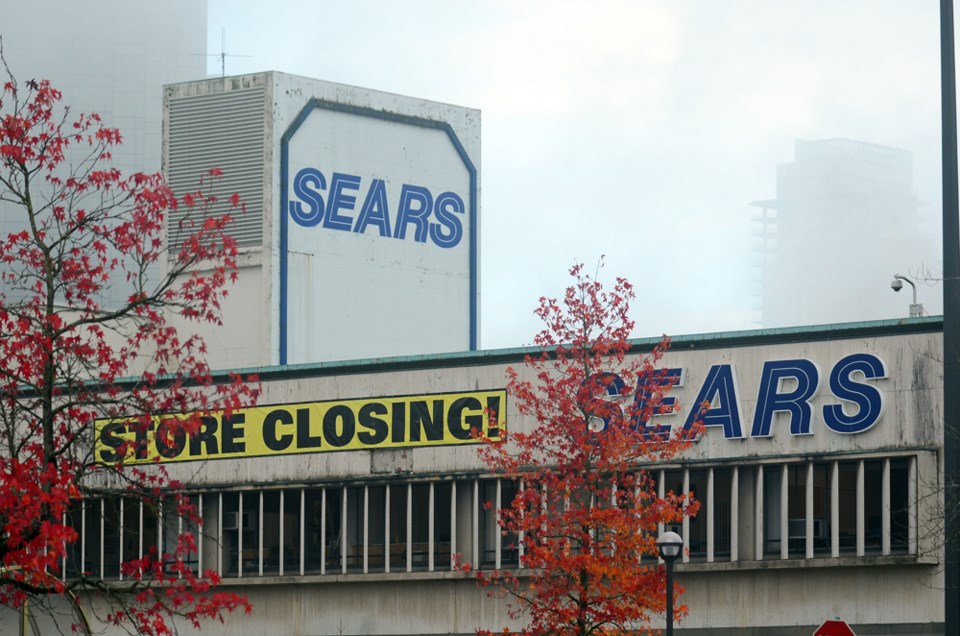 The Sears site in Metrotown will be the first redevelopment project under the City of Burnaby’s newly adopted and controversial Metrotown Downtown Plan.

A conceptual master plan and the first phase for the nine-acre site, owned by Concord Pacific Group of Companies, is going to a public hearing next week.

Sears Canada sold its Metrotown property two years ago to Concord as part of a three-property deal worth $140 million. The site at 4750 Kingsway includes the Sears store, the space underneath where Toys R Us is located, surface and underground parking at the mall, loading facilities and the public plaza at the corner of Kingsway and Nelson Avenue.

The developer’s vision is to transform the area into a “pedestrian-oriented” and “transit-connected” community, according to a city report, one that “takes inspiration from its physical location in Burnaby’s emerging downtown.”

The Metrotown Downtown Plan replaced the 1977 plan for the area and calls for the creation of something the municipality has never had in its 125-year existence: a downtown.

“The overall concept for the site is to see its eventual transition from a suburban-style, auto-oriented department store, into a dynamic mixed-use development that is focused on the pedestrian,” reads the report.

Once completed, the site will accommodate six residential towers, each atop a commercial podium, along Kingsway.

Peter Webb, senior vice-president of development at Concord, told the NOW construction will be carried out in four phases and the buildings will range between 35 and 65 storeys. The tallest towers will be located at each end, with a dip in the middle.

“(Phase 1) is the eastern three towers,” he said, adding there will be a total of 1,309 condo units in Phase 1 and several levels of underground parking.

Asked why the company went with a curve design, Webb said it’s because Kingsway is a “high point” that can be seen from as far as Richmond.

“We spent a lot of time thinking about it. If you have six towers in a collection, linearly, along Kingsway, there’s an opportunity that doesn’t very often present itself architecturally and from a large scale urban city building planning perspective. We were looking at the profile of the towers from great distance to see what might work to accomplish a noticeable, meaningful assemblage.”

Phase 1 will also see new vehicle, pedestrian and cycling connections built into existing streets to the north, including McMurray and McKercher avenues, as well as future connections to the south and west through the Metropolis at Metrotown site and Station Square. The existing plaza at Nelson Avenue and Kingsway will be replaced with three new open space and plaza elements.

As for the Sears building itself, Concord Pacific intends for “a larger anchor retail user” on the ground and second level, and for a single highrise commercial tower, between 20 and 30 storeys. It’s all part of Phase 4, but given the department store is shutting its doors early next year, the site could be developed sooner. (Sears Canada filed for bankruptcy this summer.)

Webb estimated it would take seven years for the finished product, but that could change depending on how the market is doing. He said Phase 1 units should be selling by this time next year.

Anyone can attend the public hearing on Tuesday, Nov. 28. The meeting starts at 7 p.m. in council chambers at 4949 Canada Way.

In July, housing activists disrupted a Burnaby council meeting with chants, noisemakers and signs in an effort to stop the passing of the Metrotown Downtown Plan. They argued the mass rezoning of the neighbourhood, which will see low-rise rentals replaced with highrise towers, will displace thousands of residents.

Council resumed after a few hours and passed the update unanimously.