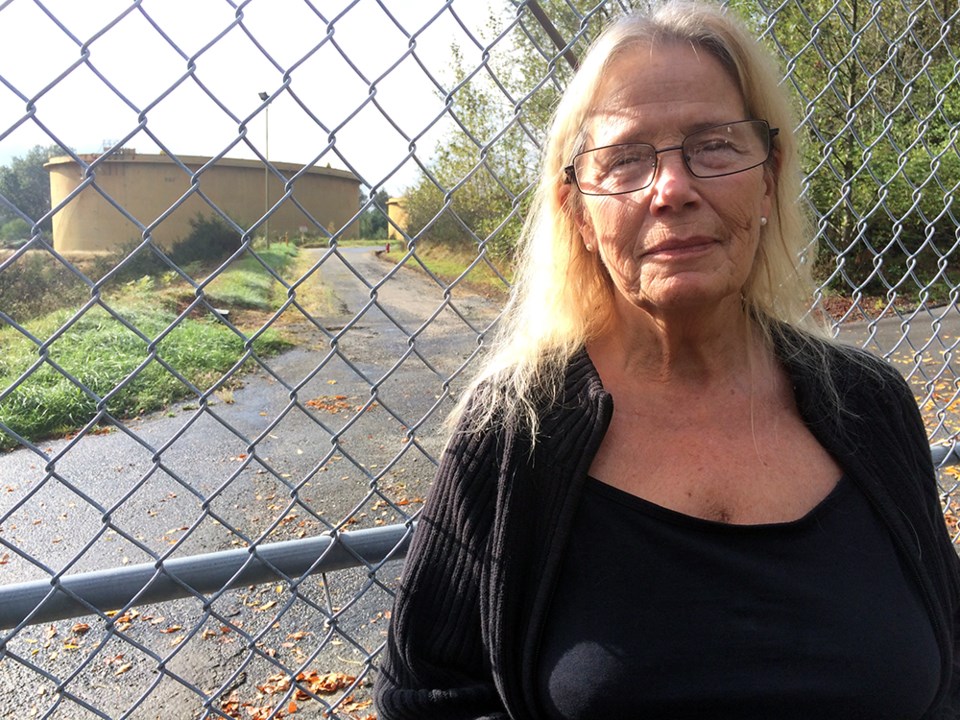 New Westminster resident Lesslie Askin was tracked by police for taking photos of these Shell storage tanks in Burnaby. Kinder Morgan, which has a tank farm across the street from Shell's tanks, called the police on Askin.Jennifer Moreau

Lesslie Askin, a 71-year-old grandmother and retired systems analyst, was taking pictures on Aug. 3 of oil storage tanks at a Shell facility just across the street from Kinder Morgan's tank farm. Askin sparked the interest of Kinder Morgan security staff, who arrived on the scene as she was leaving.

"They were looking at me, and I actually smiled and waved, because I'm actually quite a friendly person," Askin told the NOW. "I didn't want to go over because I couldn't be sure who they were."

Ten days later, police were knocking on her door in New Westminster, asking questions. Askin explained she was taking pictures to send in with her letter of comment to the National Energy Board for the Kinder Morgan expansion hearing.

Afterwards, Askin looked up the name of one of the officers online and discovered he worked with the Integrated National Security Enforcement Team, which includes CSIS, the Canadian Border Services Agency and the RCMP. The team's primary goal is to monitor terrorism and threats to national security.

"At this point, I'm thinking holy cow," she said.

Alarmed by the incident, Askin contacted the office of Burnaby-Douglas MP Kennedy Stewart, whose staff followed up and discovered her name was entered a database, as she was a suspicious person, but that the file had been closed. Askin has since filed an Access to Information request, hoping for more answers.

"By what mechanism does a private company call a national security division and get someone like me and report an incident like this," she asked.

Stewart raised the issue in the House of Commons Friday, asking the government to apologize to Askin and ensure there was nothing permanent on her record.

"It could cause a lot of trouble for the crossing borders and what not," Stewart said, adding he knows of one other case of police following someone connected to the pipeline expansion hearing.

Kinder Morgan sent the NOW an email stating the company can confirm from internal security records that on Aug. 3 security personnel saw someone taking pictures at the Burnaby tank storage terminal. (According to Askin's description of where she was on Underhill Avenue it was actually the Shell facility.)

According to Kinder Morgan, security approached the person who then fled the scene, and the incident was reported to the RCMP.

Kinder Morgan has had similar incidents at other terminals in B.C. and Alberta where the RCMP have followed up with an investigation, the company stated.

"Our top priority remains the security and safety of our operations, staff and the community. It is our security protocol to record and file an internal report of any suspicious activities surrounding our facilities and to inform the RCMP of the incident. Any matter reported to RCMP is to ensure the security and safety of our facilities and the surrounding community is maintained," the statement reads.

Kinder Morgan also plans to reach out to Askin and answer any questions she has about the facility.

As for fleeing the scene, Askin said that was a "complete crock."

Meanwhile, Stewart is hoping anyone else with police issues related to Kinder Morgan will contact his constituency office.