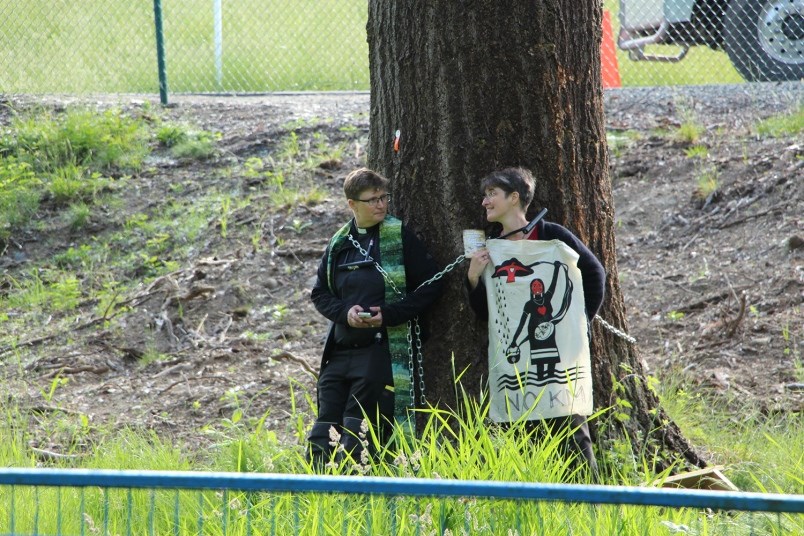 An Anglican priest and her parishioner are among more than 200 anti-pipeline activists arrested in Burnaby this year, but on Wednesday they became the first found guilty of civil contempt of court in the ongoing Trans Mountain pipeline saga.

On May 25, Laurel Dykstra and Linda Hutchings chained themselves to a tree on the property of Trans Mountain’s Burnaby Mountain tank farm with bicycle U-locks around their necks.

Dykstra told the NOW they did so as an act of prayer and to protest the pipeline company’s clearing of trees on the southwest corner of its property.

This summer, however, the two women were relieved when criminal contempt of court charges were dropped by the Crown, Dykstra said. Dozens of other protesters have been convicted of that charge in recent months, with sentencing ratcheting up into longer and longer jail terms.

But Trans Mountain picked up the case and sought the civil charge, which was handed down by Judge Kenneth Affleck in B.C. Supreme Court in Vancouver Wednesday morning.

“It felt pretty personal. We’ve been singled out from amongst a group of other people who have had charges dropped,” Dykstra said. “It feels targeted and it feels like an intimidation tactic where the public participation of folks and dissent are being threatened financially.”

Trans Mountain’s lawyer, Matthew Huys, argued in court that Dykstra and Hutchings should be convicted because they knowingly crossed into Trans Mountain’s property and violated the injunction, which bars protesters from coming within five metres of the proerty line.

“Everyone who breaches a court order faces consequences, environmental protest or not,” Huys said.

The lawyer showed portions of video recorded by members of Burnaby RCMP on May 25.
A cop is heard asking the women whether they’re willing to leave the area willingly, to which one replies, “No thank you.”
After giving a copy of the injunction to the protesters and reading it to them, the video shows police eventually cutting the chain around the tree and arresting Dykstra and Hutchings.

Addressing the court, Hutchings told Affleck she did not contest any of the facts laid out by Trans Mountain’s lawyer, but said she did not agree with his interpretation of the laws that apply in the case.

“Our understanding is on a different understanding of law,” she said. “I see a fence, a property line, an injunction zone, as an imaginary line drawn to protect interests and I see a tree as a being, a creature who draws from the earth and water and as an indicator of the one who makes trees and who makes Earth
“We sought to speak the truth with our bodies about where our allegiance lies.”

Hutchings said she respects pre-existing Coast Salish law, which she believes she was respecting and upholding when she chained herself to the tree.

“I’m satisfied that the tree that Ms. Hutchings and Ms. Dykstra chained themselves to on the 25th of May was well within property line of the Trans Mountain pipeline and that would be apparent from the fact that there was a fence there,” he said before rendering his conviction of civil contempt of court.

Dykstra and Hutchings represented themselves in court on Wednesday, but told the judge they would like to retain counsel for their sentencing hearing.

When Dykstra asked Huys how much the costs might amount to, she did not get an answer. Huys declined to answer questions from the NOW.

Dykstra said she understood a seven-day jail term was a possibility when she took the action in May but she expected to face the Crown in court, which cannot seek court costs. That potentially large bill is concerning, she said.

“Tens and perhaps hundreds of thousands of dollars in legal fees for a company that’s now owned by our country is obscene,” she said.

Sentencing is scheduled for Nov. 23.