Burnaby RCMP warns people against taking the law into their own hands
Aug 2, 2018 2:30 PM By: Kelvin Gawley 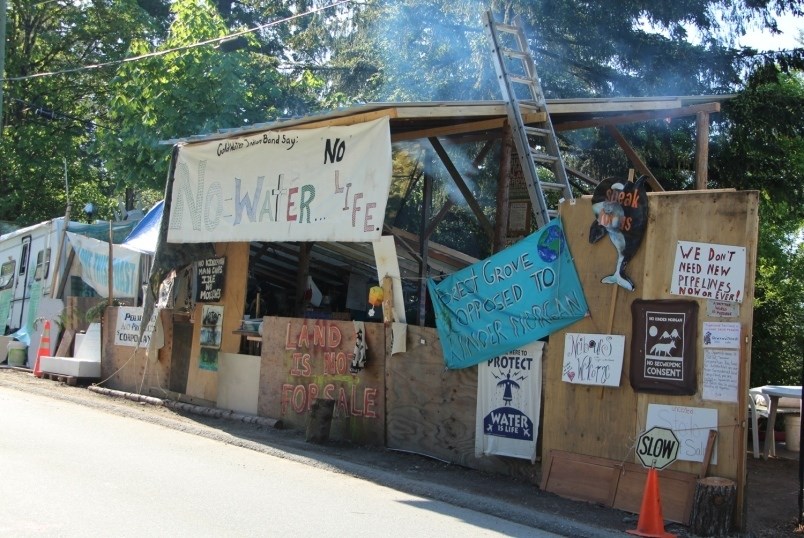 A pro-pipeline group is threatening a 'cleanup' of Camp Cloud.NOW FILES

An Alberta-based pro-pipeline group is threatening a vigilante eviction of pipeline protesters on Burnaby Mountain – prompting police to urge the public not to take the law into their own hands.

“This is a national embarrassment and something needs to be done,” Cory Morgan wrote on his blog.

Morgan, a libertarian blogger and former political candidate, said the legal system has failed to properly deal with Camp Cloud, a collection of trailers, wood structures and tents near the entrance of Kinder Morgan’s Trans Mountain pipeline tank farm.

On Wednesday evening, Morgan tweeted that some members of the camp would be in Vancouver for court proceedings the next morning – providing an opportunity for his group to move in.

“The Citizens Committee to Evict Camp Cloud will be performing their first direct action while the squatters are gone,” he wrote in a since-deleted tweet. “It’s going to be fun.”

The morning came and went without any appearance from Morgan or members of his closed Facebook group.

“Last night’s postings were more just actually to light a fire under their butts,” Morgan told the NOW. But, he said, the threat won’t be empty next time.

“We really are organizing with the plan on getting out there if the authorities don’t get a move on with this,” Morgan said.

Morgan said he will wait to see the outcome of the City of Burnaby’s application for a court order to enforce the eviction notice it gave Camp Cloud on July 18. A B.C. Supreme Court judge is set to hear the city’s application on Aug. 10.

If the judge upholds the portion of an existing injunction allowing the camp to remain, Morgan said he believes the law would no longer apply in that area.

“If it turns out that it’s a completely lawless spot – as far as I’m concerned that’s what the injunction is saying – then I guess citizens will have the right to take it upon themselves to go in there and deal with it themselves,” he said.

Morgan’s proposed “cleanup” of Camp Cloud would simply amount to picking up garbage, he said. He said there would only be violence if it were instigated by members of Camp Cloud, in which case Morgan’s “eviction committee” members would defend themselves.

Morgan said he was motivated to organize the group in an effort to end interference with the planned expansion of the Trans Mountain pipeline.

“We seem to be crippled by a camp full of layabouts on the side of a road,” he said. “We can’t even clean them out, how is any investor going to feel confident investing in any energy project in Canada when we can’t even do the most minor of removal of illegal protesters?”

But local police are reminding Morgan and others it is not their place to evict Camp Cloud.

“Police would urge people not take matters into their own hands,” said Supt. Chuck McDonald, Burnaby RCMP operations officer. “The RCMP respects the dignity of all people and ask the same of all stakeholders.”

An RCMP spokesperson said police were aware of the online comments threatening a vigilante eviction and that police were monitoring the area to keep the peace.

Morgan’s comments came about a week after another Alberta conservative said he planned action against Camp Cloud. Former Conservative Party of Canada leadership candidate Rick Peterson tweeted a picture of a bulldozer and captioned it: “See if we can get one of these out to Camp Cloud to help law enforcement officials enforce the rule of law.”

Peterson said the plan was to bring the bulldozer to the camp on a flatbed truck as a symbolic gesture in support of construction on the pipeline.

A Member of Peterson’s pro-pipeline group, Suits and Boots, alleged he was assaulted by camp members when he went to scope out a location to park the bulldozer. Peterson said he cancelled the demonstration because he believes the area is unsafe.