The B.C. government has thrown another wrench into Kinder Morgan’s plans to twin its Edmonton-to-Burnaby pipeline.
Jan 30, 2018 2:43 PM By: Tereza Verenca 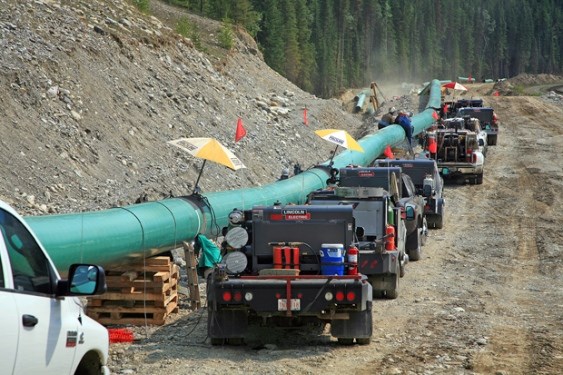 The B.C. government has thrown another wrench into Kinder Morgan’s plans to twin its Edmonton-to-Burnaby pipeline.

On Tuesday, the province said it wants to place restrictions on the increased transportation of diluted bitumen – by rail or pipeline – until further studies on the oil can be done.

The Trans Mountain expansion project will triple the capacity of the company’s current pipeline, transporting up to 890,000 barrels of “dilbit” per day.

(B.C.’s NDP-Green alliance has been a strong opponent of the project and has vowed to use “every tool available” to defend B.C.’s coast. Before the New Democrats came to power, the B.C. Liberals issued Kinder Morgan an environmental certificate and said the company had met its five conditions.)

“The potential for a diluted bitumen spill already poses significant risk to our inland and coastal environment and the thousands of existing tourism and marine harvesting jobs,” said George Heyman, Minister of Environment and Climate Change Strategy, in a press release. “British Columbians rightfully expect their government to defend B.C.’s coastline and our inland waterways, and the economic and environmental interests that are so important to the people in our province, and we are working hard to do just that.”

The province will set up an independent advisory panel that will make recommendations on if and how heavy oils can be safely transported and cleaned up, if spilled.

“While the advisory panel is proceeding, the province is proposing regulatory restrictions to be placed on the increase of diluted bitumen transportation,” noted the release.

B.C. plans to meet with First Nations, industry, local governments and environmental groups in the coming weeks and months to gather feedback.

“The expansion project’s approval by the Government of Canada followed a rigorous and lengthy regulatory process that included a thorough examination of the pipeline and products being shipped, and there are conditions on the project from both the National Energy Board and the B.C. Environmental Assessment Office related to diluted bitumen,” she wrote.

The transportation restrictions are part of a handful of other measures the province announced to improve preparedness, response and recovery from potential spills.

The other measures include: establishing response times for spills; setting up geographic response plans to identify sensitive, natural, cultural or significant economic resources at risk from spills; requiring spillers to provide some form of restitution for the impacts of spills in spaces like parks, forests and beaches; and broaden the province’s authority to respond to marine spills.

In a press release, the City of Burnaby said it was "thrilled" to learn of the provincial measures.

“Since Kinder Morgan first proposed this new pipeline to carry diluted bitumen to offshore markets, we have been expressing our concern about the unique and potentially devastating environmental threats diluted bitumen presents, which are significantly worse than conventional crude oil,” said Mayor Derek Corrigan. “More scientific research and data on the environmental damage caused by spilled dilbit and on the cleanup process must be conducted so the damaging behavior of spilled dilbit can be better understood.”

The federal government approved the Trans Mountain project in November 2016, on the recommendation of the National Energy Board (NEB). The NEB attached 157 conditions to its approval.

Kinder Morgan originally set its pipeline in-service date to December 2019, but it has since been pushed back to December 2020 as a result of permitting issues. Hounsell did not provide comment when asked if the province’s new rules will further delay the project.