Students at two more Burnaby elementary schools will have seismically safe schools by 2022, according to a pair of government announcements this week adding up to just over $28.6 million. B.C.
Jun 26, 2019 2:46 PM By: Cornelia Naylor 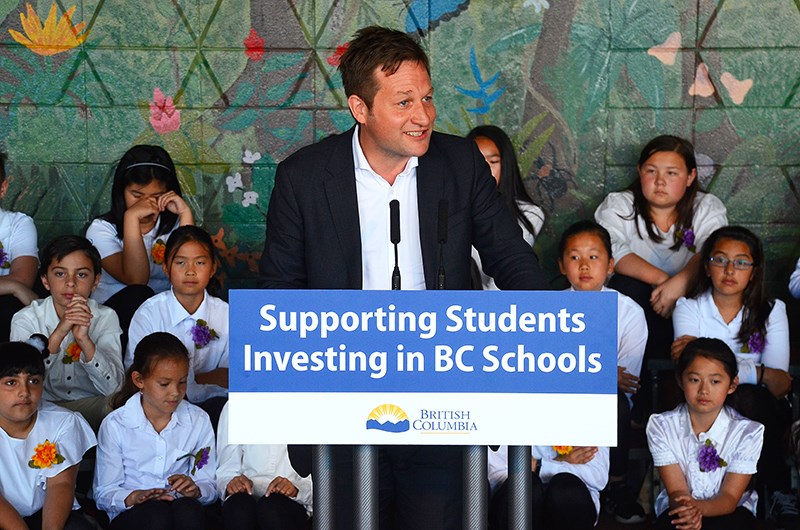 Education Minister Rob Fleming speaks at Parkcrest Elementary School in Burnaby Wednesday. He was there to announce the province's plan to spend $28.6 million on seismic upgrades at Parkcrest and Seaforth elementary schools.

Students at two more Burnaby elementary schools will have seismically safe schools by 2022, according to a pair of government announcements this week adding up to just over $28.6 million.

The North Burnaby elementary school’s two-storey classroom block, built in 1964, is rated high risk, and experts predict isolated elements of that section, like walls, would fail in the event of an earthquake.

That part of the school is to be demolished and replaced, according to Wednesday’s announcement.

Parkcrest’s one-storey classroom block, which was built in 1960, is deemed a moderate seismic risk and will be reinforced.

No plans were announced for the school’s gym, which is also rated a medium seismic danger, according to a risk-rating report updated in 2016.

One 680-square-metre classroom block at Seaforth is rated high risk; the rest of the school is deemed a medium or low risk of damage in an earthquake.

Work on both projects is expected to begin in summer 2020 and be complete for fall 2022.

Kids at Seaforth will have to spend some time in portables during construction, according to Wednesday’s announcement, but Parkcrest students will be able to stay in regular classrooms throughout.

“This is a welcome and important investment in our school communities,”  Burnaby board of education chair Gary Wong said. “Providing seismically safe buildings for our students” – and for those who work with them – “ is a priority we share with the ministry of education.”