Proving art has no barriers

Rebecca Nosella’s paintings have many similarities to that of a Van Gogh or a Monet – unusual angles and lots of colour without the use of lines. In fact, they’re almost a near match.
Oct 20, 2015 9:33 AM By: Tereza Verenca 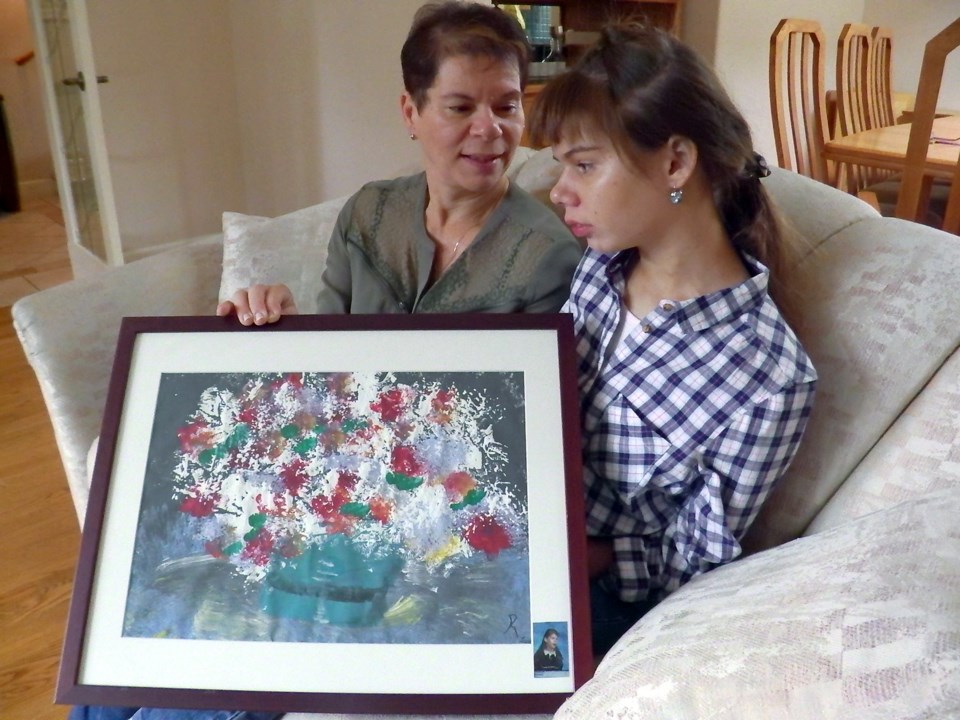 Vicki Nosella, left, is her daughter’s biggest fan. Rebecca was diagnosed with Aicardi’s Syndrome and cerebral palsy at six weeks old. Even though she can’t see or talk, the 24-year-old has been able to express herself through painting. The work of art pictured above is similar to one of Vincent van Gogh’s flower pots.Tereza Verenca

Rebecca Nosella’s paintings have many similarities to that of a Van Gogh or a Monet – unusual angles and lots of colour without the use of lines. In fact, they’re almost a near match.

A few differences are that Nosella doesn’t use a paintbrush, nor can she see her canvas. Her tools of choice include everyday objects like pot scrubbers, feather dusters, squeegees and cotton balls.

At six weeks old, the local artist was diagnosed with cerebral palsy and Aicardi’s Syndrome, a rare neurological disorder that affects one in 1.5 million girls and causes epilepsy, vision and speech impairment and low muscle tone.

“She’s 24 on the outside, but four-and-a-half on the inside,” mother Vicki told the NOW during an interview at their Burnaby home.

Nosella, whose work will be featured at the 11th annual INCLUSION Art Show & Sale in Vancouver this week, discovered her artistic side in Grade 7. With a little help from her education assistant, Leah Drumm, her first painting was a Van Gogh flower pot, a piece that hangs in the dining room.

“My son went to Paris to the Van Gogh museum, saw the actual painting. So I said, ‘Jimmy, which one do you like better?’ He goes, ‘I kind of like Rebecca’s better because it’s not so stuffy.’ I did not expect it at all,” Vicki said.

The process by which Nosella does her craft is unique, just like her. First, she is given two to three colours of tempera paint to choose from.

“We give her time,” her mother says. “It’s like a constant detour in her brain. If you’re going from your place to my place, you have the traffic along Barnet Highway to deal with. There may be a road closure, a detour, that’s what her brain faces every day. It may take three seconds, it may take 10 minutes, or it may not happen at all.”

Nosella then transforms her blank canvas by using objects she can firmly grasp, like old yogurt containers.

“We call her our recycle girl, basically anything you can find in your recycle bin, anything that makes noise, so you can get the pounding and texture, the feel,” Vicki enthusiastically explained, adding the family has had to change the kitchen table at least twice so far.

The 24-year-old’s paintings come in small to large sizes. Her portfolio also includes painted jewelry boxes, gift bags and wedding invitations, which act both as an invite and as art once they’re framed.

Selling the pieces at art shows, though, was a random decision, Vicki told the NOW. When Nosella was around 19 years old, many people had expressed interest in her work.

“I hate to take money from people even if it’s going to Rebecca, but she said, ‘No, this is gorgeous,’” Vicki said of a buyer.

The bond between mother and daughter, meanwhile, is something Vicki can’t boast enough about.

“If you are given a child with a disability, she’s your girl. She’s a teacher, without words or a diploma.”

The INCLUSION Art Show & Sale, which showcases the original work of more than 150 B.C. artists with disabilities, runs on Oct. 28 and 29 at Heritage Hall in Vancouver. Ninety per cent of the sales are returned to the artist.