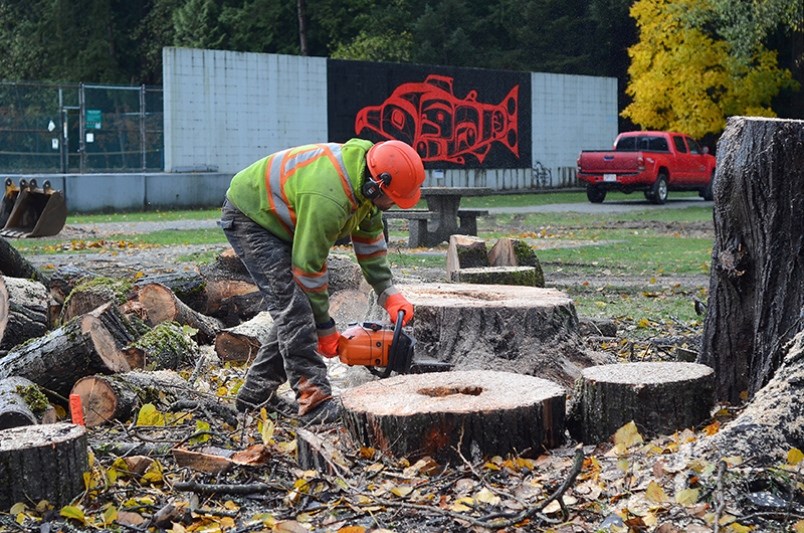 Central Park residents were incensed when the City of Burnaby started cutting down trees in November 2018. FILE PHOTO

In a study commissioned by the City of Burnaby, researchers discovered symptoms of tree decline in 6% of cedars and 19% of hemlocks, with an additional 31% of the hemlock population already dead, said a TWU news release.

To mitigate against this, TWU researchers recommend continuing to restore areas of the park by planting drought-tolerant native plants, focusing on species that are already present in the park.

Five TWU researchers, led by lead research assistant Vanessa Jones and guided by four TWU faculty, spent hours collecting data on the trees and other aspects of ecosystem health in Central Park. Together, the team collected detailed health information for over 4,000 trees and shrubs throughout the park.

“There are a lot of different factors that influence tree health, for example, disease, invasive plants, or soil compaction,” Jones said. “However, all of these problems are exacerbated by the climate problem. High summer temperatures and low summer and spring precipitation, on top of the other factors that urban trees face, could have drastic impacts on the Central Park population. There are actions that can be done to combat this – namely, restoring the forest with native plant species that are drought tolerant.”

In their study, TWU researchers note that climate projections for Burnaby have shown that temperatures in the area will continue to increase, resulting in hotter, drier summers and milder, wet winters. The predicted rise in temperature will significantly impact local plant growth, particularly for plants that are less drought-resilient.

Ways to promote the vitality of Central Park, as proposed by TWU researchers, include planting mostly deciduous trees, as they seem more resilient in the face of the projected climate changes. As well, researchers recommend planting young Douglas firs, a coniferous species that is relatively drought tolerant.

Other key recommendations include monitoring the health of trees, soil moisture, continued tracking of climatic changes and their impacts, in order to protect Central Park and preserve its role as a cherished place in Burnaby. Central Park has over 100 years of history.