An oil refinery is seeking to add storage tanks to its North Burnaby refinery site, rousing ire and concern from local residents.
Jul 30, 2020 11:42 AM By: Dustin Godfrey 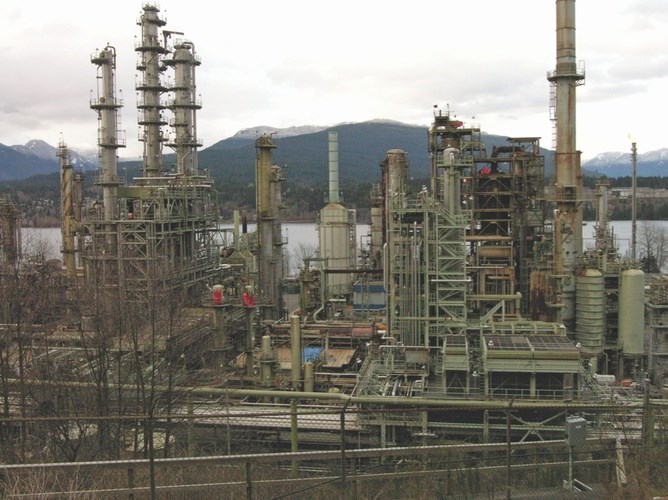 Burnaby’s Parkland Fuel refinery is one of only two refineries left in B.C.File photo / BIV

An oil refinery is seeking to add storage tanks to its North Burnaby refinery site, rousing ire and concern from local residents.

Neighbours of the Parkland Burnaby Refinery’s Area 2, which hosts the main refinery, say they heard nothing before the application for new storage tanks was submitted to B.C.’s Ministry of Environment and Climate Change for review.

The application was submitted at the end of June this year, and residents have between July 13 and Aug. 4 to submit a written comment on the issue. The application calls for eight new storage tanks totalling 293,000 barrels of capacity, which Parkland said in an email statement was intended for improving its biofuel capacity.

Parkland noted the refinery is the only one in North America using its existing infrastructure to create low-carbon and renewable fuels, like biofuels.

“In order for us to modernize our facility to support the CleanBC goal of the production of 650 million litres of renewable fuels by 2030, our facility will undergo changes including removing out-of-service tanks and adding new tanks, increasing hydrogen production, enabling flexibility of rail and wharf to handle renewable feedstocks,” Parkland said in an email.

“We have been working with our regulators, engaging with our community advisory panel as well as our broader neighbourhood to communicate our low-carbon and modernization plans over the last two years.”

But the two largest tanks, combining for 200,000 barrels, would carry oil. Those two tanks could each see more than 18 million barrels of oil flow through them each year, according to Parkland’s application.

In all, the tanks are expected to add a total of 153.4 tonnes of carbon dioxide equivalents (tCO2e) to the refinery’s annual rate just shy of 500,000 tCO2e.

“Obviously there is an issue with further emissions and what that might look like for the community,” said Rachel Yensen, a nearby resident who said she was most concerned about the lack of notification from the refinery. “Parkland have been great responsively to questions or concerns through the community but not so great at consultations prior to anything they do. And this would have an impact on the community.”

Yensen added that while she’s disappointed by the fact she and her neighbours never heard from Parkland before the application went in, she didn’t find it surprising.

She noted a conflict the community had with the refinery on another recent project: a lot meant for parking for contractors working on a project at the refinery, which was intended to be temporary.

“There was no community consultation, and it had a huge impact on the community,” Yensen said. “There’s nothing anybody can do after the fact.”

While Peter Cech, a Burnaby school district trustee and nearby resident, was concerned about the lack of consultation, he also pointed to a larger concern. He couldn’t take issue with the six tanks intended to hold biofuel products, citing the climate change emergency, but he is concerned about the health impacts of the two oil tanks.

It’s an issue with the tanks’ roofs, Cech said. While the other six tanks are slated to have fixed roofs, the two larger tanks would have floating roofs, which sink as the oil is drawn out of the tank and can allow emissions in the area.

Cech pointed to a 2002 UBC study that looked at the impact of the floating-roof tanks at the refinery’s Area 1, which hosts most of the refinery’s storage tanks and rail and pipeline receiving infrastructure a short distance from Area 2.

That study found volatile organic compounds in the area around the tanks were five times more prevalent than in other areas of Metro Vancouver. That includes benzene and 1-3 butadiene, both of which are carcinogenic.

Cech noted that can be problematic for people with asthma.