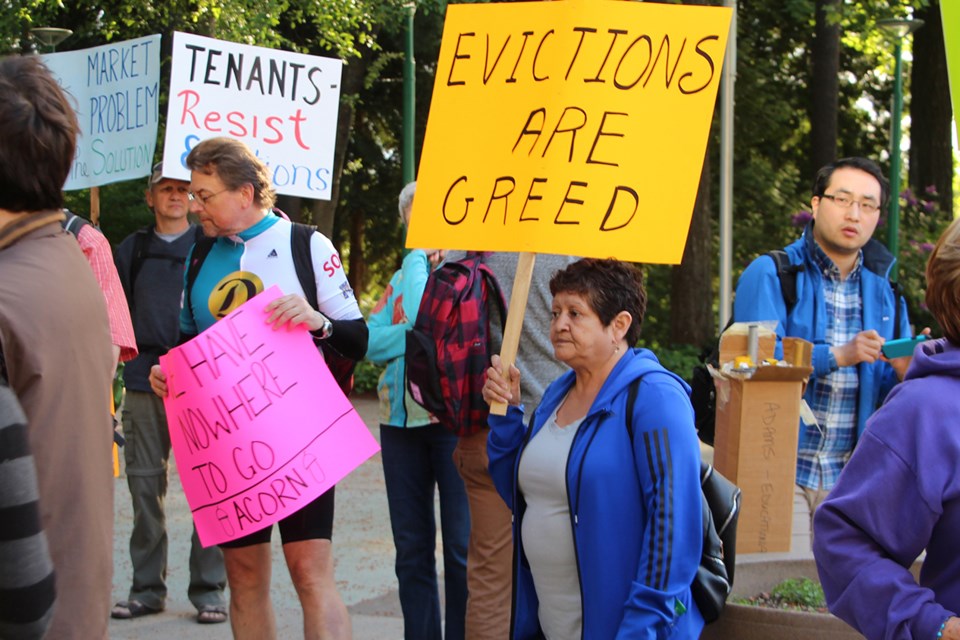 Patricia Morenco (centre) stands outside council chambers Tuesday evening before a public hearing. She's lived on Telford Avenue in Burnaby for 12 years, and says she is concerned about where she will go if her building is next to be demolished.Lauren Boothby

A public hearing devolved into a yelling match in Burnaby Tuesday evening, as councillors got a scolding from residents of Metrotown, housing activists, and other residents of Burnaby and Metro Vancouver concerned about demovictions.

Tensions were high in the packed council chambers – more than 100 people attended – where presentations went on late into the night, wrapping up just after 11:30 p.m.  The public hearing included three rezoning requests that would see 211 units of low-cost housing in aging three-storey walk-ups demolished and replaced with 39-, 31- and 33-storey highrises at 5977 Wilson Ave., 6525 Telford Ave., and the shared property of 6433 McKay Ave. and 6366 Cassie Ave., respectively.

Councillors sat with faces downcast and quiet through most of the speeches, though they were insulted and provoked often.

Speeches against the proposals were emotional, angry, and sometimes theatrical. Murray Martin of housing activist group ACORN had harsh words for council, saying they had “beady eyes,” among other insults. Mayor Derek Corrigan spoke up during Martin’s second presentation, calling him ‘obnoxious,’ threatened to have security remove him if he did not be quiet.

One man accused Burnaby city council of building a Titanic, before getting down on his knees and saying “Where are the lifeboats?” and another asked permission to use his remaining time (around 10:30 p.m.) for a moment of silence for those who had already been demovicted in Burnaby, but Mayor Derek Corrigan did not allow it.  Some raised their voices at council for not looking at them while they spoke.

Others, however, seemed to speak from the heart, concerned about what would become of themselves, their neighbours and the community if the rezonings, and subsequent demolition of the buildings, are approved.

A clip from last night’s tense public hearing in Burnaby. Earl Pollitt, who lives beside one of the buildings up for rezoning, appeared distressed about what is happening to his neighbours, and what may happen to him if he is demovicted #vanre pic.twitter.com/xRmPIjo1wZ

Erika Schinzel, tenant of 6366 Cassie Ave., came to represent and support around 100 of her neighbours living in the 59 apartments facing demolition. She said she’s been unable to find a decent one-bedroom apartment in Burnaby for under $1,200, and her stress level is “through the roof.”

“An older building in good repair and with years of life left, with a beautiful, lush backyard garden, is doomed to be torn down,” she said, reading from a prepared speech. “Your reckless actions are displacing Burnaby citizens that have done nothing wrong but choosing the wrong part of town to rent a place.”

Schinzel said in an interview after the meeting that she feels ill knowing her community will be gone, and seeing the holes in the ground where buildings used to be.

“It turns my stomach around. I really have been physically sick to my stomach about this situation and about the fact that the building will be torn down,” she told the NOW. “I couldn't see it anymore, it's like ripping the soul, ripping the guts out of a neighbourhood.”

Earl Pollitt, who lives on Wilson Ave. next to one of the buildings up for rezoning, appeared distressed as he told council that if he had to move, he would have to pay double or triple the rent he is currently paying, which he cannot afford.

“I can’t imagine the depression. Before, I was speaking up for my neighbours, I didn’t have it that close to me, but now it’s getting closer,” he said. “I hope that when you go and vote on this, that each one of you will say how you feel, you will vote how you feel, and it won’t be just one person guiding this, saying ‘you have to vote this way.’”

Pollitt told the NOW after the meeting that the mayor will “have to answer to God for all the pain he’s inflicted on people.

According to housing activist group ACORN, more than 700 units have been demolished in Metrotown since 2011, and more than 700 more are on the chopping block.

We’re about to go in. Here’s what’s going on. #vanre pic.twitter.com/NkAUhL5lUZ