The cost of demolition is on the rise but Richmond council extends time to allow for more salvage
May 17, 2019 8:00 AM By: Maria Rantanen 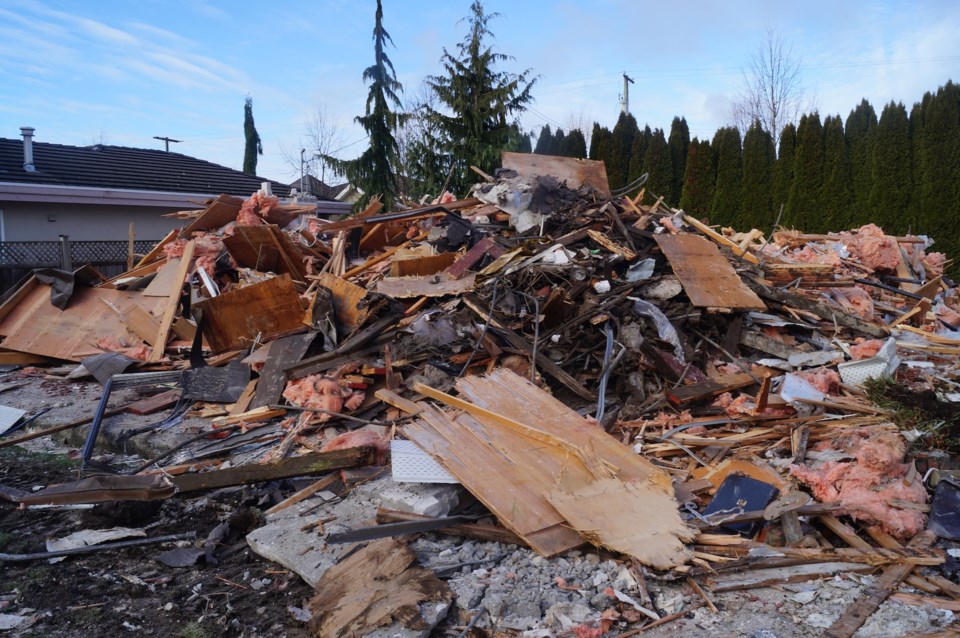 When a building is torn down, much of the wood waste gets burned as fuel or chipped as filler for the dump.

And, while at least 70 per cent of demolition waste — especially concrete and asphalt — is recycled in Richmond, how wood is handled could be improved, according to one councillor.

In discussing the proposed bylaw changes, Coun. Harold Steves said he was in favour of high disposal fees but that’s just a beginning.

“I don’t think (the fee increase) goes far enough,” he said, adding that “there should be a law that you either move the house or use portions of it to build a new house or disassemble it board by board so it can be used.”

Metro Vancouver’s director of Solid Waste Planning, Andrew Marr, estimated that less than 10 per cent of wood from demolitions is being reused while much of it is being burned as fuel.

With rising energy costs, this option is increasingly attractive.

“Burning it isn’t the worst thing, especially if it’s displacing an arguably dirtier fuel like coal, but it’s not the best thing,” Marr said. “The best thing is if people can reuse the wood for its own purpose, whether it’s construction or a fixture.”

Some companies also chip wood, which then gets used as filler in landfills.

According to Metro Vancouver, the diversion rate for construction demolition material in the region was 77 per cent in 2017 with 1.27 million tonnes recycled out of a total of 1.6 million tonnes produced.

Concrete and asphalt were the largest components accounting for 71 per cent (900,000 tonnes) of recycled material. Both are fairly easy to break down and reuse in new construction.

Wood accounted for 241,000 tonnes of all construction demolition waste in 2017 and, while the “vast majority” is perfectly good, Marr said its reuse rate remains low.

How much construction demolition waste gets diverted, however, depends on municipal bylaws, explained Marr.

There are companies, such as Unbuilders based in Vancouver and Western Reclaimed based in Maple Ridge, that reclaim wood from residential and commercial sites for reuse.

His company salvaged large quantities of wood from a Richmond secondary school and the former Richmond Lordco. The wood was then reused for furniture, flooring and wallboards.

“Homes are not ideal because of the small volume and the cost to retrieve (the wood) is higher,” MacDonald said.

However, the quality of wood found in older homes is often better than what is sold today, explained Adam Corneil, owner of Unbuilders.

New wood sold at a lumber store is second or third growth spruce, compared to 500-1,000-year-old Douglas fir that was used in construction 100 years ago.

“Reclaimed wood is stronger, straighter and harder than the softwood that you buy off the shelves today,” he said.

Unbuilders’ mission is to make deconstruction a standard practise and “shift the mindset of builders and homeowners” to reclaiming wood for use in new homes, Corneil explained.

Anything from before the 1950s is worth reclaiming, including warehouses, barns and outbuildings, Corneil explained, and some material from the 1950s to the 1970s is also usable.

Corneil said “green demolition bylaws” that require high recycling rates – like Richmond’s 70 per cent – still allow for a lot of waste as much of the wood goes for fuel or landfill filler, Corneil explained.

In Richmond, the diversion rate is about 75 per cent, explained city spokesperson Ted Townsend.

“The deposits that are required to obtain a demolition permit are quite hefty, usually running in the tens of thousands of dollars, so there’s a strong financial incentive for people to comply,” said Townsend in an email.

At its recent meeting, Richmond council passed the first reading to amend the Building Regulation Bylaw to extend the time for demolition permits to allow for more recycling and salvaging, and to consider salvaged material as recycled material. The vote was unanimous. However, Coun. Alexa Loo voted against the increase in disposal fees.