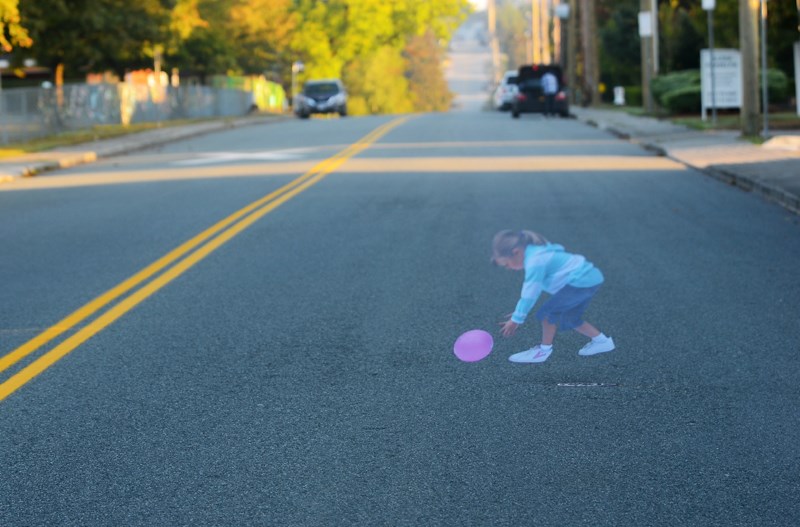 "Pavement Patty" a 3D illusion has been installed on Delta Avenue in Burnaby between Brentwood Park and Holy Cross elementary schools to raise awareness about safety in school zones.Cornelia Naylor

A 3D illusion of a girl chasing a ball onto the street in front of two Burnaby elementary schools gave speeding motorists something to think about Tuesday morning.

"Pavement Patty,” an image of a girl printed on weatherproof, skid-proof vinyl, was installed directly onto Delta Avenue between Brentwood Park and Holy Cross elementary schools Monday night along with signs reading "In a rush at a school zone? Seriously?"

The image is designed to morph into a 3D optical illusion when drivers are a few feet away.

The Community Against Preventable Injuries, BCAA and the Burnaby school district partnered on the installation to draw attention to persistent poor driving behaviours in school zones across the province.

It’s an issue Brentwood principal Jillian Lewis is all too familiar with, especially since construction on Lougheed Highway seems to have driven more traffic onto the street in front of her school.

It’s not the first time Pavement Patty has been seen running across the street for her ball.

The 80-foot decal, designed with help from Wasserman + Partners Advertising, was first placed in front of an elementary school in West Vancouver in 2010, but organizers don’t want drivers to get too used to her, so she hasn’t been seen again until now.

“If we did it all the time, it would be old news, and the point of it is to really get people talking about the issue of school zone safety,” said Jennifer Smith, senior program manager with Preventable.

Careless and potentially deadly behaviour in school zones continues to be a problem according to a survey of B.C. principals, teachers and parents conducted last week for BCAA by Insights West.

Eighty per cent of those surveyed said they had witnessed speeding, 73 per cent had witnessed motorists not stopping for crosswalks, 78 per cent had seen parents encouraging their kids to do unsafe things and a staggering 56 per cent witnessed at least one near miss – a child almost hit by a car – during this year’s back-to-school week.

"We have brought back Pavement Patty to remind drivers that even at low speeds, children can be seriously injured or killed," said Preventable co-executive director Dr. Ian Pike. "Slow down, leave the phone alone and give the road your full attention."

Preventable and BCAA chose the school zone on Delta Avenue because it is a busy street between two elementary schools and offers clear sight lines so motorists aren’t startled.

“As you drive up, you can see that there’s something on the pavement, so it’s not like a sudden effect,” Smith said. “It emerges very slowly, and once you approach the optimal viewing distance, you can see the 3D illusion, but it doesn’t pop out suddenly.”

Pavement Patty will continue to chase her ball across Delta Avenue until 4 p.m. Friday.