The Clarius pocket ultrasound scanner is being used to scan lungs for pneumonia.
May 25, 2020 4:12 PM By: Cornelia Naylor 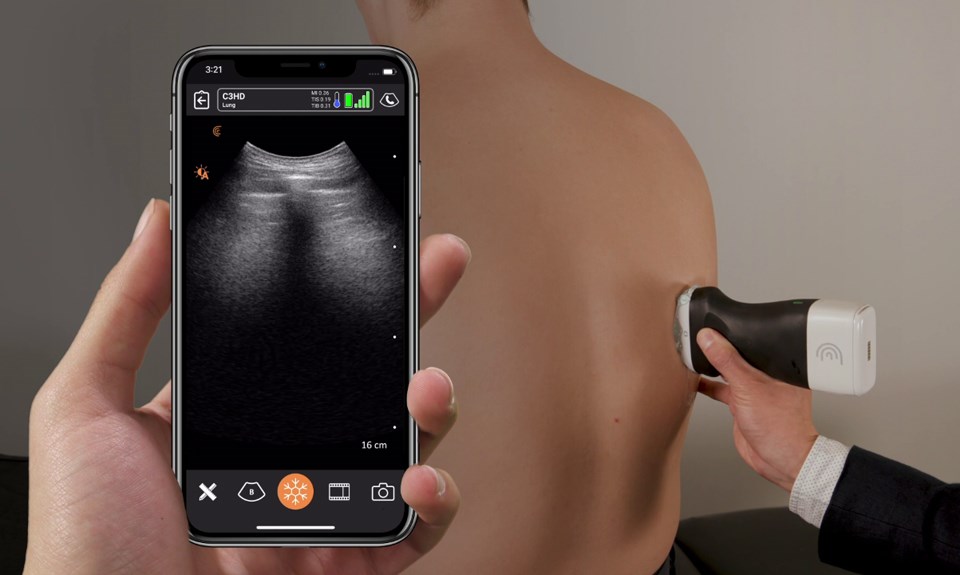 The image from a Clarius pocket ultrasound scanner can be viewed on a smart-phone. The device, designed and manufactured by a Burnaby company, is being used on the frontlines of the COVID-19 pandemic to scan lungs for pneumonia.Contributed

It’s tough to get an image of a lung with an ultrasound scanner because the air inside them doesn’t bounce back the device’s high-frequency sound waves.

But the technology has become very useful for picking up a “twinkling” on the surface of COVID-19 patients’ lungs that indicates pneumonia, according to Kris Dickie, the vice-president of research and development for Clarius Mobile Health, a Burnaby startup that designs and manufactures cordless, pocket ultrasound scanners.

“The level of this twinkling indicates how severe the pneumonia might be in the lungs,” he told the NOW. “It’s quite a good tool once you know what you’re looking at and how to do the scan.”

Since the beginning of the pandemic, Dickie said sales of his company’s second-generation device, Clarius HD, which launched in November, have doubled.

“We can’t build fast enough,” he said. “Our back order is still millions of dollars of goods right now.”

It was in Italy in March that the company first saw demand surge.

Until then, Clarius had carved out a solid niche in the private market, selling 95% of its devices to private doctors, clinics and physiotherapists.

With COVID-19, however, demand has surged in hospitals, as health-care workers dealing with an avalanche of cases recognize the advantage of the cordless, handheld devices for quick, bedside lung assessments.

Compared to the bulky traditional machines, handhelds are cheaper (starting at $6,500 per unit compared to about $100,000), easier to keep clean inside a single-use sleeve and more convenient, according to Dickie.

Doctors at the bedside can start scanning within seconds and view the images on a smartphone or tablet.

All that has made the pocket ultrasound devices a hot commodity in hospitals around the world.

Clarius recently made its single biggest hospital sale to a hospital in Maryland, Dickie said.

Now that the handheld devices are being used more widely in hospitals, he’s confident their advantages will keep demand high even after the pandemic.

“There’ll be so much exposure with portable ultrasound, and not just Clarius but even our competition, that a lot of doctors and departments will say, ‘Hey, we can start using these devices instead of the big machines.’”