Mother Nature has been pretty busy this fall, at least in one Burnaby neighbourhood. Among the homes and trails in the Beaverbrook area of the city runs Stoney Creek. And this year, the waterway is teeming with spawning chum.
Oct 25, 2016 4:02 PM By: Jeremy Deutsch 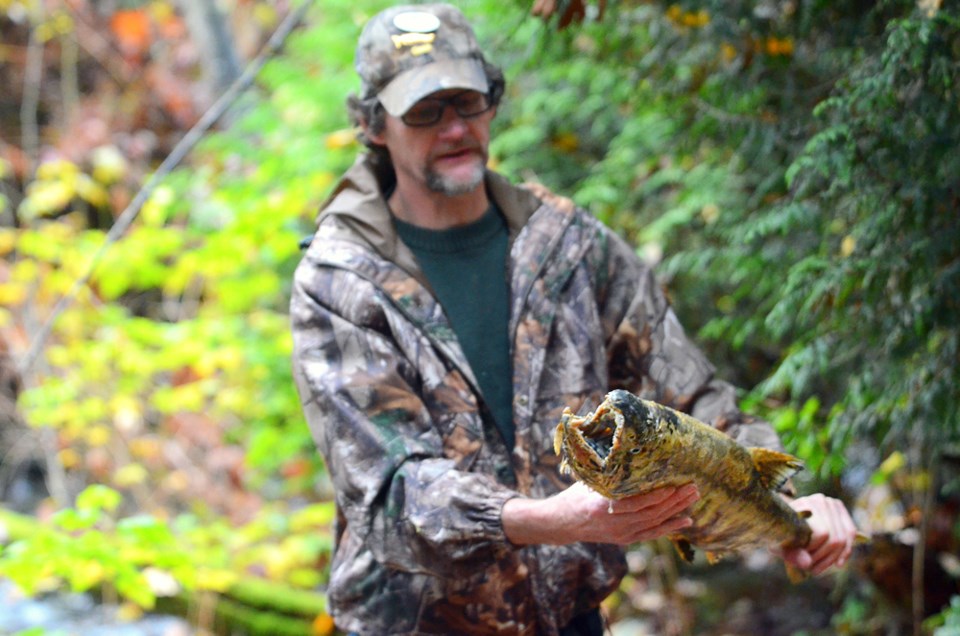 John Templeton, chair of the Stoney Creek Environment Committee holds a chum that finished spawning recently. The groups has counted 800 salmon in this year’s Stoney Creek run so far.Cornelia Naylor

Mother Nature has been pretty busy this fall, at least in one Burnaby neighbourhood.

Among the homes and trails in the Beaverbrook area of the city runs Stoney Creek. And this year, the waterway is teeming with spawning chum.

So far, the count in this year’s salmon run for the creek is about 800 chum, and there are still several weeks before the run is finished.

“For this time of year, that’s healthy,” said John Templeton, the chair of the Stoney Creek Environment Committee. “This is a very good start.”

On Monday, the group provided a tour of the creek and an opportunity to view the spawning chum.

Templeton explained the chum, who are about four years old, come up from the Fraser River and then Brunette River into the reaches of Stoney Creek to spawn. The group starts counting the salmon around the start of October until mid-November. It’s at that point that the coho also return to creek until the end of the year.

Templeton noted only 700 chum were counted in all of last year. A couple years back, some 1,900 chum and 300 coho were counted in the creek. He cautioned it’s too early to say if the count will hit 2,000, but things are looking pretty good for 2016.

The organization tracks the statistics for each run and shares them with the federal government and at a regional meeting of stream keepers in early 2017.

While the importance of a thriving salmon run is obvious, Templeton sees the fish as the canary in the coalmine for the river. The spawning salmon signal a healthy and thriving ecosystem.

“It means we’re doing things right,” Templeton told theNOW. It’s a sign (the creek) is healthy. If the water was polluted or dirty, the fish wouldn’t come here.”

He also argued the creek has become more than just a stream, pointing out students from nearby high schools and SFU are using the waterway for educational purposes. And with development on the rise in the city, he said it’s important the community be vigilant to make sure the resource is kept pristine.

“People are excited, they love to see these fish,” he said. “It makes them feel good inside.”

The health of the creek is good news after a tributary was damaged from a construction mishap last fall.

A series of washouts along the Stoney Creek tributary near Gaglardi Way threatened the very existence of the habitat. But just a couple months ago, after some serious rehab work, juvenile coho were swimming among the rocks.