She serenades premature babies. And it's just so lovely

Katherine Deane is in the middle of singing Twinkle, Twinkle, Little Star when she notices a reaction from her audience of one.
Sep 14, 2019 10:07 AM By: Chris Campbell 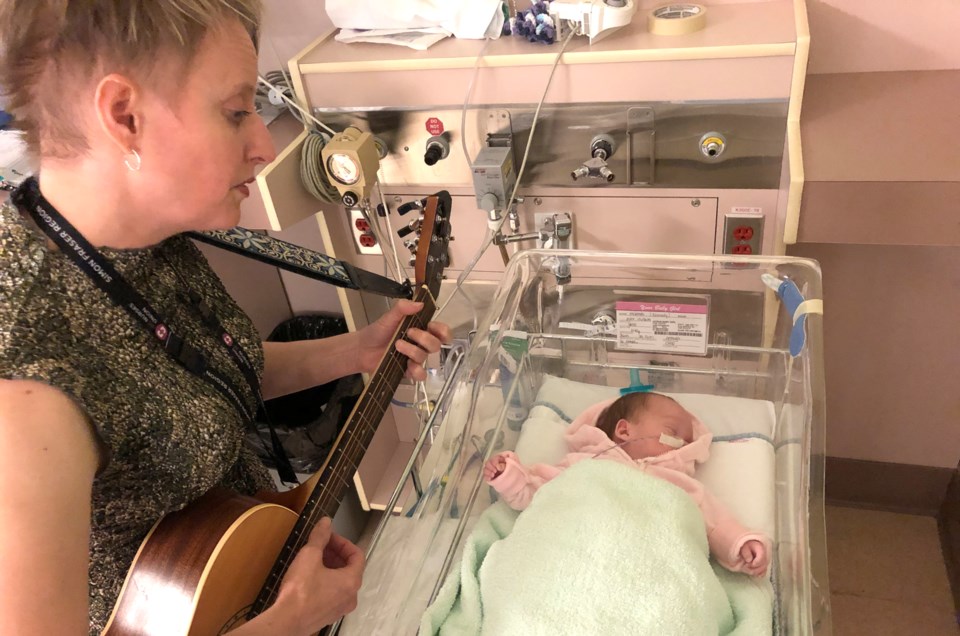 Katherine Deane is in the middle of singing Twinkle, Twinkle, Little Star when she notices a reaction from her audience of one.

For the past few minutes, tiny Kennedy McRae - born several months premature – has been slowly, gradually waking up as Deane sings softly to her.

It has been a smooth process until Deane sees Kennedy moving her little arms to one side. It’s a movement so subtle, most people wouldn’t really notice it, but Deane stops strumming her guitar and places her hand on the baby’s chest - a movement she calls a “hand hug.”

She doesn’t break for a moment from her gentle lullaby.

Later, Deane says her training in music therapy for premature infants includes understanding how to look for subtle reactions from a baby, which could mean they are feeling overstimulated.

“I’m always trying to tailor the music in the moments depending on the response,” Deane says. “It’s about building different layers into a session and, most importantly, being aware.”

Deane is the centre director of West Side Music Together. She has a degree in music therapy, but has also done extensive training specifically in the area of premature infants in neonatal intensive care units, also known simply as NICUs. This led her all the way to a health-care facility in Kentucky to train through the National Institute for Infant and Child Medical Music Therapy.

It’s this expertise that led to her being hired to conduct music therapy in one of Canada’s best NICUs at Royal Columbian Hospital in New Westminster. Since May, Deane has been coming to RCH two to three days per week.

During each visit, Deane checks in by talking to NICU staff and parents to schedule different sessions. Deane sometimes works with infants who are just waking up – a sometimes-jarring experience for a premature baby – but also with babies who are breastfeeding.

‘There’s a lot of evidence about how music helps with brain development,” Deane said.

As described above, the music also helps calm a baby.

The Pemberton resident and his wife Adrienne have had an insanely stressful few months. They’ve been in RCH’s NICU for the past two months, a period that has included the couple’s twins – Teagan and Asher – being born at 33.5 weeks. David has been commuting back and forth between Pemberton and New West. The couple also have a three-year-old named Kaden.

So when Deane conducts one of her music therapy sessions with the couple’s twins – usually about 30 to 45 minutes in length – it’s not just the babies who benefit.

“It’s really interesting because you see the kids relax, but also the parents, too,” David said. “It’s comforting.”

That’s music to Deane’s ears because her goal is to also make life better for parents.

“A big part of what I do is to empower parents during a really difficult time,” she said, adding that some parents actually feel a sort of “shame” about singing, even to their children.

Deane said she did the NICU training in the U.S. because it’s relatively “new” in Canada. This type of program is starting to grow in this country, with Deane saying it’s been added at Surrey’s hospital and BC Women’s Hospital in Vancouver.

RCH has been able to hire Deane thanks to funding from the Music Heals charity and through the support of the RCH Foundation.

“It’s just one more thing you can offer a child,” said Deane.

And with that, Deane grabbed her guitar and went back to work, starting a soft, gentle version of You Are My Sunshine to another child.