The NOW reached out to local activists who stood up to Trans Mountain in 2014. They haven't wavered in their opposition to the expansion project.
Nov 27, 2019 2:48 PM By: Kelvin Gawley 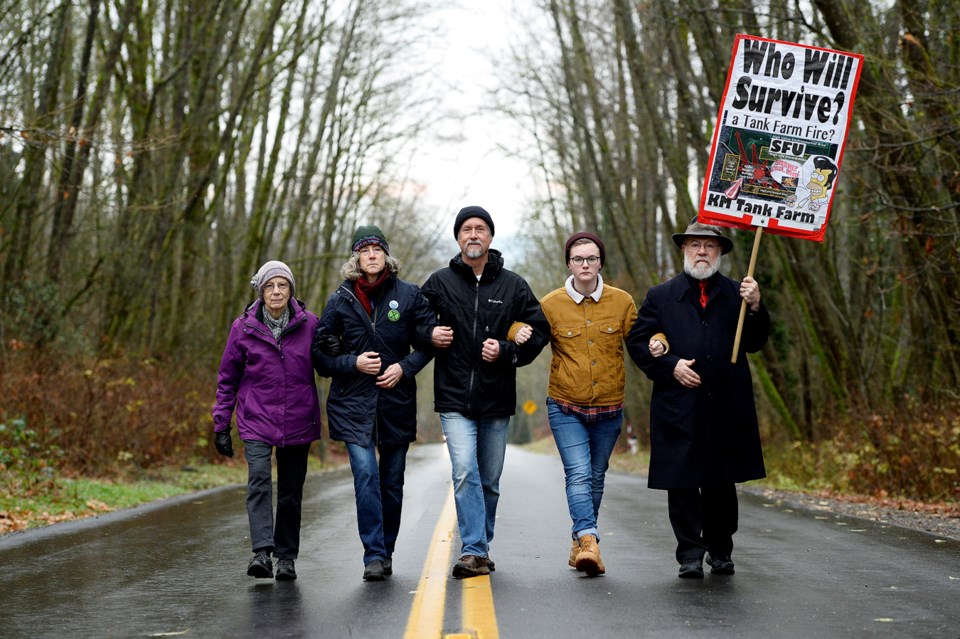 In 2014, hundreds of people flocked to Burnaby Mountain as Kinder Morgan began prepatory work for its proposed expansion of the Trans Mountain pipeline.

Dozens of people were arrested for violating a court-ordered injunction. (Charges were later dropped due to the injunction line being marked in the wrong place.)

In the five years since, the project has changed hands (it’s now owned by the federal government), has won and lost court challenges, and been approved by Prime Minister Justin Trudeau (twice). It is now moving ahead, despite more lawsuits on the way.

The NOW photographed and reached out to five local activists who were arrested in 2015, including two parent-child pairs: Ruth Walmsley and her mother, Barbara Grant, and Peter Cech and his child Noam Cech (who declined to be interviewed).

They reflected on those early protest days and what’s happened since. And they looked to the road ahead.

Interviews have been edited for clarity and length.

The faith and commitment of people up on Burnaby Mountain that we were going to be able to make a difference.

I always say to people, the only actions you can control are your own. So with respect to controlling my own actions, if I take my car out, I don’t take it out to do one thing; I will try to do two or three or four things in one trip instead of making four separate trips. I try to carpool as often as possible. And I do, on occasion, use public transit.

I will continue to look for opportunities to push the current federal government to invest in clean energy and help workers that are in the fossil fuel sector transition to good jobs in the clean energy sector or in other opportunities that will support a cleaner economy in Canada. (Cech was elected to Burnaby’s school board in 2018.)

Looking forward to the next five years, how do you hope things go?

Now that it’s a minority federal government, maybe some rethinking can occur around what they’re going to do around the pipeline. But, ultimately, I think our last remaining hope is our Coast Salish peoples. They need to be consulted properly on the project. They’ve stated their opposition. And, to my mind, it’s the last legal mechanism where the pipeline can be stopped, where the government cannot proceed.

I was part of the community in terms of getting the word out to people about what was going on and mobilizing people to be able to express their concerns and resistance to having this project go forward.

It took on a life of its own and how inspiring that was to see how a social movement can really make a difference when enough people are willing to come out and raise their voices.

I’ve continued to work with BROKE (Burnaby Residents Opposing Kinder Morgan Expansion) and our focus has been on continuing to raise awareness about the risks of this project.  We’re organizing meetings with elected leaders, including Burnaby North-Seymour MP Terry Beech and Burnaby South MP Jagmeet Singh. We are very committed to Indigenous leadership and being allies to the Indigenous communities in this region and we are very much taking our cues from them as well.

What do you hope happens over the next five years?

My hope is that, as we move forward, more and more people will recognize that business as usual with the fossil fuel industry – which includes building this pipeline and expanding the tar sands – is really not an option if we want to preserve life as we know it.

Every morning I was putting up a huge banner that said “Stop Kinder Morgan,” and then, eventually, the arrests started happening after the injunction was put in place.

I’d been studying the abolitionist movement in the United States against slavery, and I thought of this phrase: “Where Quakers lead, Unitarians will follow.” And I’m a Unitarian and Ruth Walmsley is a Quaker. So, when she got arrested... I decided that I would get arrested.

I dressed up for the occasion and went to jail for five hours and just enjoyed my rest time in jail and had a muffin and signed the document that said I wouldn’t come back and prepared for the court date where I would plead guilty and take whatever punishment was meted out. But, of course, the 105 people that were arrested had their suits dropped because the Kinder Morgan co-ordinates were 30 metres in the wrong place.

What stands out to me is a sense of determination and hope that we would arouse enough concern about climate change and the implications of the Trans Mountain expansion, that we could stop it.

I’ve attended every monthly meeting except one of the BROKE general meetings since 2012. We keep working to continue the education as climate change gets worse and worse, there are more and more people waking up to the need to stop building fossil fuel infrastructure.

What do you hope to see happen in the next five years?

Well, I said that we’ve delayed it and stopped it for seven years and I’m prepared to fight for seven more years. And in the next five years, I predict that the climate change disasters will increase and the youth awareness will increase and so that there will be a lot more allies coming from the youth movement to stop the Trans Mountain expansion.

I went up there on the mountain to add my voice, protesting the pipeline. I got arrested and was treated very well by police. I didn’t get charged, maybe because of my age, but I was prepared for whatever happened.

I did it because I believed that building the pipeline is a step in the wrong direction for our society.

The willingness of many other people to also protest about the building of the pipeline.

Well, I was 84 five years ago, so I’m 89 now. However, I still attend some protests and I just feel, more than ever, that pipeline is going to increase the damage that we are doing to the Earth.

We have to be doing whatever we can do.

What do you hope happens over the next five years?

I hope that the pipeline expansion is cancelled and that we see more and more efforts being put into forms of sustainable energy.