Anti-pipeline protest camp grew on the side of the road for months before being forcefully evicted
Dec 26, 2018 12:15 PM By: Burnaby Now 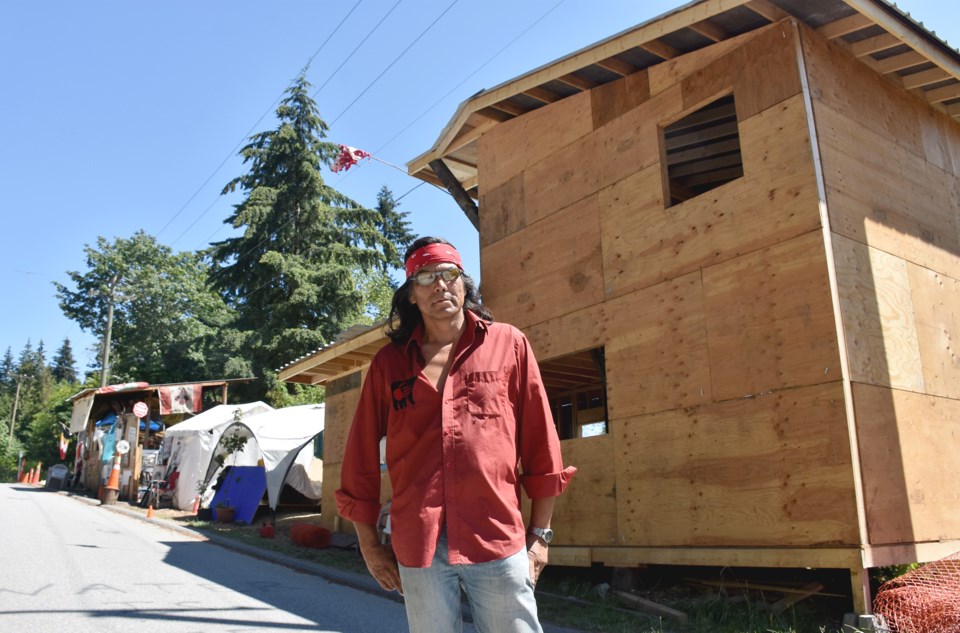 Johnny Lee stands in front of a carver's cabin he is building at Camp Cloud.Kelvin Gawley

The corner of Underhill Avenue and Shellmont Street was the epicentre of a controversy that dominated the news in Burnaby for much of 2018 – making it the story of the year.

In January, Camp Cloud began as a single trailer parked on the corner across from an entrance to Trans Mountain’s tank farm. It was put there to protest the Trans Mountain pipeline expansion project.

From the beginning, there was a split in the neighbouring Forest Grove community about the camp’s presence. Some residents complained about the camp’s effect on traffic, while others stood in solidarity.

In the ensuing months, the camp grew in size and population. Some residents speculated the camp had turned into more than just a protest, evolving into a place for people who were homeless.

Camp Cloud residents built a kitchen, a shower and even a two-storey carver’s cabin where they planned to host movie nights.

The letters to the editor poured in at the NOW. Many supported the camp’s goals of keeping a watchful eye on the pipeline company.

Many opposed the project but said the ragtag camp was dangerous and unnecessary. Some expressed outrage the city and police allowed it to stay.

The city was forced into action during the summer to respond to complaints about safety. Concrete barriers were erected.

Things heated up in the summer, when pipeline supporters clashed with camp members on the mountain. A dramatic video showed a shouting match.

A group from Alberta threatened a vigilante eviction of the camp.

After initially staying neutral, the city eventually got fed up with the camp and sought an eviction order in August. The order was granted by a B.C. Supreme Court judge who gave the protesters 48 hours to vacate the area.

That deadline came and went with the camp still standing and its members defiant.

A waiting game followed, with the city and Burnaby RCMP refusing to say when they would enforce the eviction.

But the NOW was there when dozens of cops descended on the camp before 6 a.m. on Aug. 16. They arrested all the campers in sight and cleared them from the area.

City crews then moved in and cleared the camp with the help of a backhoe. By the end of the day, the site was once again a nondescript patch of dirt on the side of the road, but the memories and resentments inspired by the camp lingered long after.