"Unfortunately, you see, the eyes go first. The birds get them," says stream-keeper Paul Cipywnyk, standing over two dead salmon in the Burnaby's Byrne Creek habitat area.
Oct 19, 2012 1:00 AM By: Jennifer Moreau 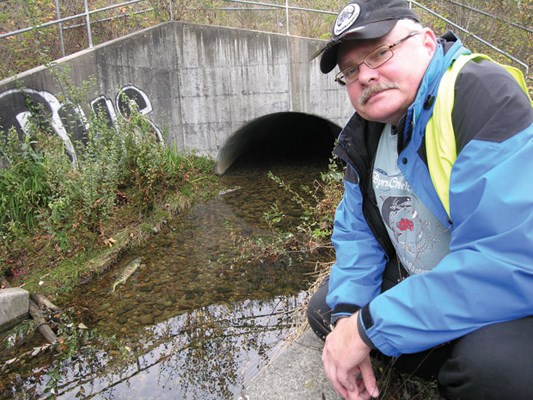 The dead males - both chum - have the mottled green and red flanks and hooked jaws characteristic of spawners that have returned to their birth streams to die. Their eye sockets are empty, pooling with watery blood, and entrails have been pulled ashore by some scavenger. There's an elegant natural beauty to the scene despite the grotesqueness of it all.

"It's hard to explain," says Cipywnyk, a longtime volunteer with the Byrne Creek Streamkeepers. "I kind of feel thankful. They have struggled against incredible odds to get here. The end is not pretty, but in a sense, it's uplifting knowing they've laid their eggs and a new generation will hatch in spring."

These two dead salmon are among the first to return to Burnaby this fall after years in the open ocean. Every year, around mid-October, the chum wait in the Fraser River, at the bottoms of local creeks, until the seasonal rain raises the water levels, easing their journey upstream. It's quite possible these two were even released in the creek as small fry by local school children participating in the annual effort to bolster Byrne Creek's salmon population.

"Of all those eggs, you'd be lucky to have five or six make it all the way and return to spawn again. The odds are amazing."

Every year, volunteer streamkeepers comb the creek, counting and cataloguing information on dead spawners. While they won't have final numbers until December, Cipywnyk is hoping this year's run will match if not surpass previous counts. Byrne Creek's returning salmon population peaked in 2004 at 91, but the numbers have more or less declined ever since. In 2009, just 10 were counted, but in 2011 the numbers were up to 36, and Cipywnyk doesn't know why.

"I'm not sure what's making the difference. The number of fish being released is the same," he says, musing that it could be related to ocean conditions or pollution.

With the heavy rains last weekend, Cipywnyk and other Burnaby stream-keepers are starting to see the first of the seasonal salmon returning, and so far, the numbers seem good.

In total, seven salmon have been spotted in Byrne Creek, two of which were "paired off and courting."

"There's probably 100 in the creek at the moment. It's an early run (of) chum," he says. "I think it's definitely more than last year."

James attributed the high numbers to $50,000-worth of habitat improvement work on Stoney Creek, done by volunteers and Fisheries and Oceans Canada. Now chum are turning up all along Stoney Creek, which tends to have the best salmon returns in Burnaby.

"Anywhere between the confluence (at the Brunette River) and where the creek goes under North Road, you'll see them," James said. "We were waiting for them to come because it was so dry over the early part of fall, and we were hoping they would come when the rains came, and they did."

"They're born in a little local creek, . once they hit the oceans . they are guided by an internal GPS to go thousands of kilometres up the B.C. coast.

Then a switch goes off in their brains, and a steady marathon begins till they return to their native creek," he says. "I just find that mind-boggling."

The spawners' accuracy is astounding, some returning within metres to where they've hatched, Cipywnyk says.

"When it started to pour a few days ago, I was happy because it meant the fish were coming," he says.

To see a video of salmon in Stoney Creek, go to Jennifer Moreau's blog at www.burn abynow.com.