There are school principals the world could do without – Seymour Skinner, Agatha Trunchbull and other caricatures on TV and in movies – but Burnaby principal Kurt Gurney is not one of those, according to students and staff who’ve signed a petition to
Feb 28, 2020 11:02 AM By: Cornelia Naylor 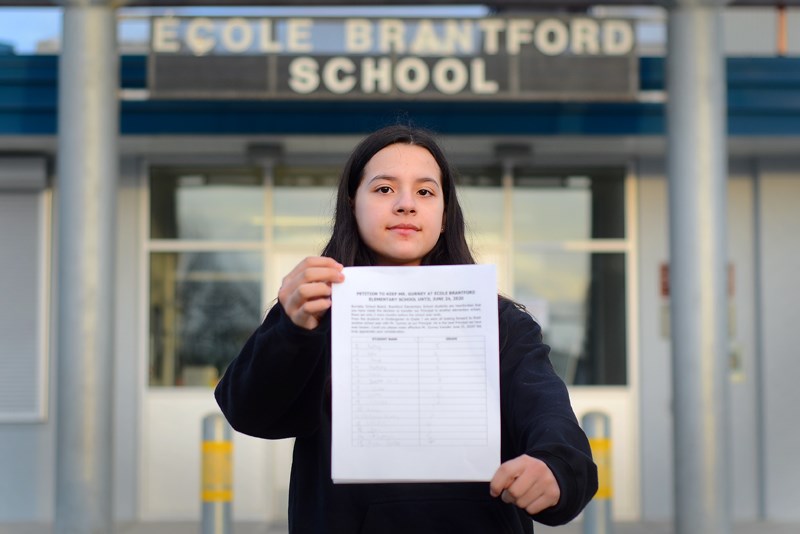 Brantford Elementary School Grade 7 student Alee Moreno holds a petition she started to stop the transfer of her principal, Kurt Gurney, more than halfway through the school year.Cornelia Naylor

There are school principals the world could do without – Seymour Skinner, Agatha Trunchbull and other caricatures on TV and in movies – but Burnaby principal Kurt Gurney is not one of those, according to students and staff who’ve signed a petition to protest his transfer away from École Brantford Elementary.

“I like him a lot because my dad, he got diagnosed with a brain tumour, and (Mr. Gurney) was always there with me and he was always by my side,” said Grade 7 student Alexandra (Alee) Moreno, who started the petition.

Gurney has been Alee’s principal for four years, she said, and he’s helped her get through some tough times and encouraged her to get involved in writing contests and supported her karate.

To illustrate how much her principal means to her, Alee’s dad, Alex Moreno, said she was considering giving him one of the karate gold medals she recently won at the B.C. Winter Games.

Alee started the petition after school on Thursday, the day Gurney announced to students he was being transferred to Forest Grove Elementary on April 1.

“She was very emotional so we supported her,” said Alee’s mom, Madelaine.

Within an hour, the petition, which calls on the school district to hold off on the transfer till the end of the school year, had 126 signatures from students and some staff.

Parents are very upset by the move, according to Madelaine, an active volunteer at the school.

Madelaine has also written a letter to the school board.

In an email to parents Wednesday, Gurney said he was being transferred because of a retirement.

Kinder Jones, Forest Grove’s current principal is retiring at the end of March, according to an email to parents at that school last Friday.

Brantford parents don’t know why Gurney has to be the one to fill the post.

“They might have a very good reason,” Alex said, “but actually we don’t know. It would be nice if they just communicate to us, so maybe we understand.”

School board chair Gary Wong said Alee’s petition “speaks to the power of an educator in a student’s life,” but that the district was faced with a retirement during the school year and needed to fill the post.

“We appreciate Mr. Gurney will be greatly missed at Brantford – he has done an exemplary job, and will bring his skills to his new school,” Wong said in an emailed statement. “The principal coming to Brantford is experienced and will be a wonderful addition to the school. As they get to know her, we hope the community becomes equally attached to their new principal.”

That’s cold comfort to Alee, who had hoped to finish her last year at Brantford with “a nice principal that knows (her).”

“I think it’s an unfair decision,” she said.