Parents at Suncrest Elementary in South Burnaby had been scraping money together for five years to install a small new piece of playground equipment this summer when their plans were blown out of the water by the provincial government.
Jan 25, 2019 1:22 PM By: Cornelia Naylor 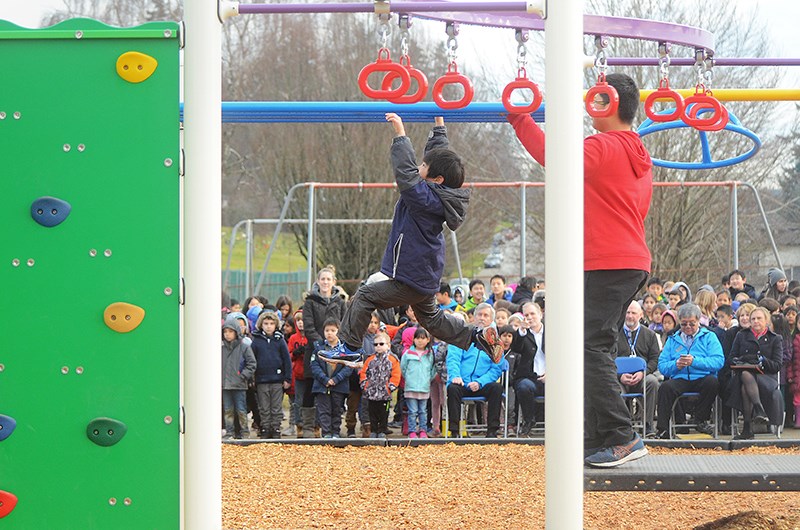 A Suncrest Elementary student takes a swing on some monkey bars during the official opening of the school's new playground, the first in Burnaby built with grants announced by Premier John Horgan last May.Cornelia Naylor

Parents at Suncrest Elementary in South Burnaby had been scraping money together for five years to install a small new piece of playground equipment this summer when their plans were blown out of the water by the provincial government.

“It was an amazing relief, but it was also very stressful because the funding came with a deadline,” said Rozsika den Haan, the Suncrest parent advisory council’s playground chair at the time.

Parents and students joined local and provincial education officials earlier this month for the official opening of the new playground, which was installed in December.

The school was given a March deadline to use the grant, which was announced last May.

Premier John Horgan announced on May 8 that the government had created a $5-million fund for ongoing support of playgrounds to lift the burden off volunteer-run parent councils who often have to fundraise for new or upgraded equipment.

Suncrest’s was the first playground built in Burnaby using those funds.

Playgrounds are important, not just for school kids, but for the whole community, Burnaby-North MLA Janet Routledge told the NOW at the playground opening.

She said her daughter-in-law had been a teacher in Vancouver at a school that didn’t have a playground.

“A lot of the parents were immigrants and refugees – they were not in a position to raise money, so the teachers did,” Routledge said. “One of the things that struck me after they had raised the money is how it built the community because parents who were isolated, socially isolated, isolated from each other would bring their kids to the school yard and they would get to know each other.”

The old wooden-structure playground at Suncrest was “on its last legs in terms of being safe,” according to principal Lori Driussi.

“They were tightening bolts regularly,” she said.

Besides being safer, the new structure is also a real hit with the kids, she said, especially the climbing net and spinner.

That’s no accident since the students were thoroughly consulted, and those were two things they asked for.

In a paper survey during the planning stage, kids were asked to describe what they’d like to be able to do in the new playground (i.e. climb, jump, spin) and which pieces of equipment they’d like to have to play with, according to Driussi.

Driussi said students love the new equipment and she’s heard the playground is being well used over the weekends too.

Without the government grant, though, it’s unlikely the school would have ended up with it anytime soon.

After five years of school carnivals, movie nights, Purdy’s fundraisers and clothing-drives, as well as sales of everything from hot lunches and flower basket to chicken and manure, the PAC had scraped together just $9,000, according to den Haan.

Driussi estimates that, including the installation by the district facilities staff, the school has instead ended up with a playground worth about $102,000.