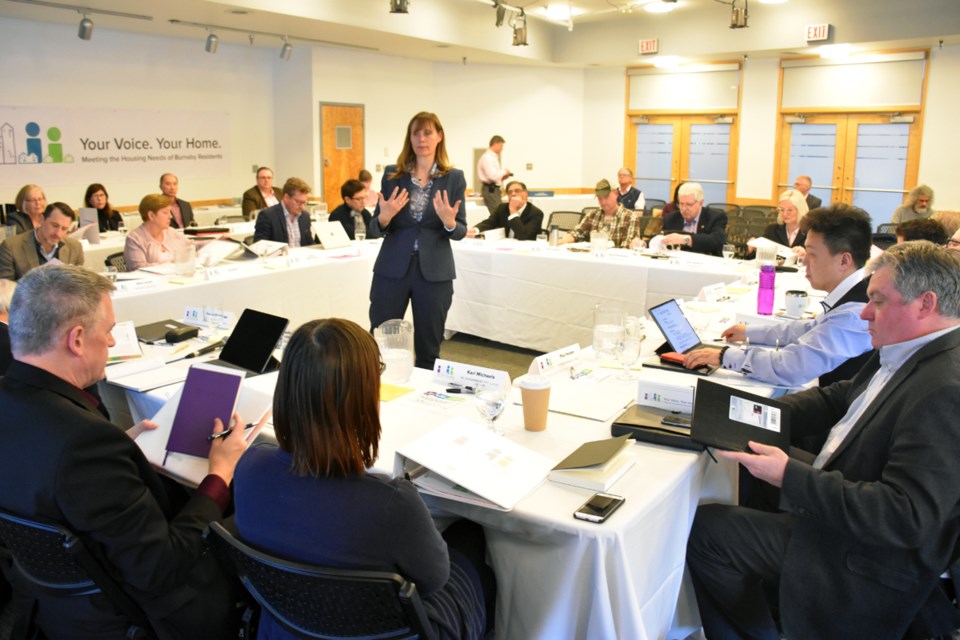 Renters, developers, politicians and activists clasped hands and took the first steps in a “tango dance” they hope will find answers to Burnaby’s housing woes.

The Mayor’s Task Force on Community Housing met for the first time on Wednesday, Feb. 27. It brought together a diverse set of people, each with a stake in the city’s future housing policies.

The task force has a six-month mandate to report back to Burnaby city council with recommendations for its future housing strategy. It will also prepare an interim report after three months, identifying short-term actions to address affordability.

The groups broad goal will be returning Burnaby's housing market to a state of balance it has lost in recent decades.

The city’s assistant director of long range planning, Lee-Ann Garnett, told the task force of a time when such a balance once existed. She used the story of a young couple who moved to Burnaby from Vancouver in the 1960s.

Albert, a BC Sugar worker, and Clara, an office cleaner, bought a new bungalow on Sumas Street, she said.

“Imagine that,” Garnett said. “A working-class family can afford to buy a new home and it was a place where they could raise their children in a great neighborhood.”

At the time, federal lending programs helped people like Albert and Clara to buy a home, she said.

She said other federal programs incentivized the construction of new rental apartment buildings, which provided housing for many immigrants, students and new arrivals to the Lower Mainland from elsewhere in Canada.

Burnaby was also a pioneer in creating social and non-market housing for seniors, disabled people and single parents, Garnett said.

“All of these things together really were this kind of balance of affordable housing for working folks,” she said.

But in the 1990s, she said, the federal government began to withdraw from its role in the housing market and Burnaby has since lost some of the balance it once enjoyed. The city has also recently urbanized and developed a lot of new condos near its town centres and SkyTrain stations, “but people were asking us a lot of questions about that,” Garnett said.

“Why were we losing homes in the process? Is this housing affordable for people? Are people renting in the neighborhood able to live near transit in these new places?”

Hundreds of rental units have been demolished in recent years to make way for new condo towers in Metrotown. Anger over these demovictions swept the city’s new mayor, Mike Hurley, into office last fall.

He has since implemented a moratorium on rezoning approvals in Metrotown and created the task force to come up with a new development plan – two of his key campaign promises.

One of the task force’s facilitators, Robin Prest of Simon Fraser University’s Morris J. Wosk Centre for Dialogue, said the coming six months of meetings and community engagement would be a “tango dance” with everyone involved learning to give and take in the process.

“We want to take the best that every person has to offer in conversation – the expertise, the lived experience, the values, the leadership – and we want to put those together in a way that creates something that will be more than the sum of its parts,” he said.

When Prest asked the parents in the room whether they knew what it was like to be a parent before their first child was born, no one raise their hand.

“To me, that really speaks to the limits of empathy and the danger in thinking that our empathy and good intentions are sufficient to understand the context,” he said.

In January, members of Stop Demovictions Burnaby – an offshoot of the Alliance Against Displacement – protested the composition of the task force, saying developers were the “enemy” of low-income renters and had no place in the decision-making process.

They also criticized Hurley for not appointing any such renters. He has since added two people he identified as local renters to the task force.

The task force is currently in its first phase and asking local residents to share their perspectives on housing. To contribute, you can fill out an online survey or sign up to participate in a community ideas workshop.