The Valley Bakery reaches the Hall of Fame

The Valley Bakery has been inducted into the Burnaby Business Hall of Fame. Original owner George Kuyer opened the doors to The Valley Bakery in 1957. In 1979, he passed the business on to his son Jack, who has been at the helm ever since.
Sep 10, 2015 10:07 AM By: Tereza Verenca 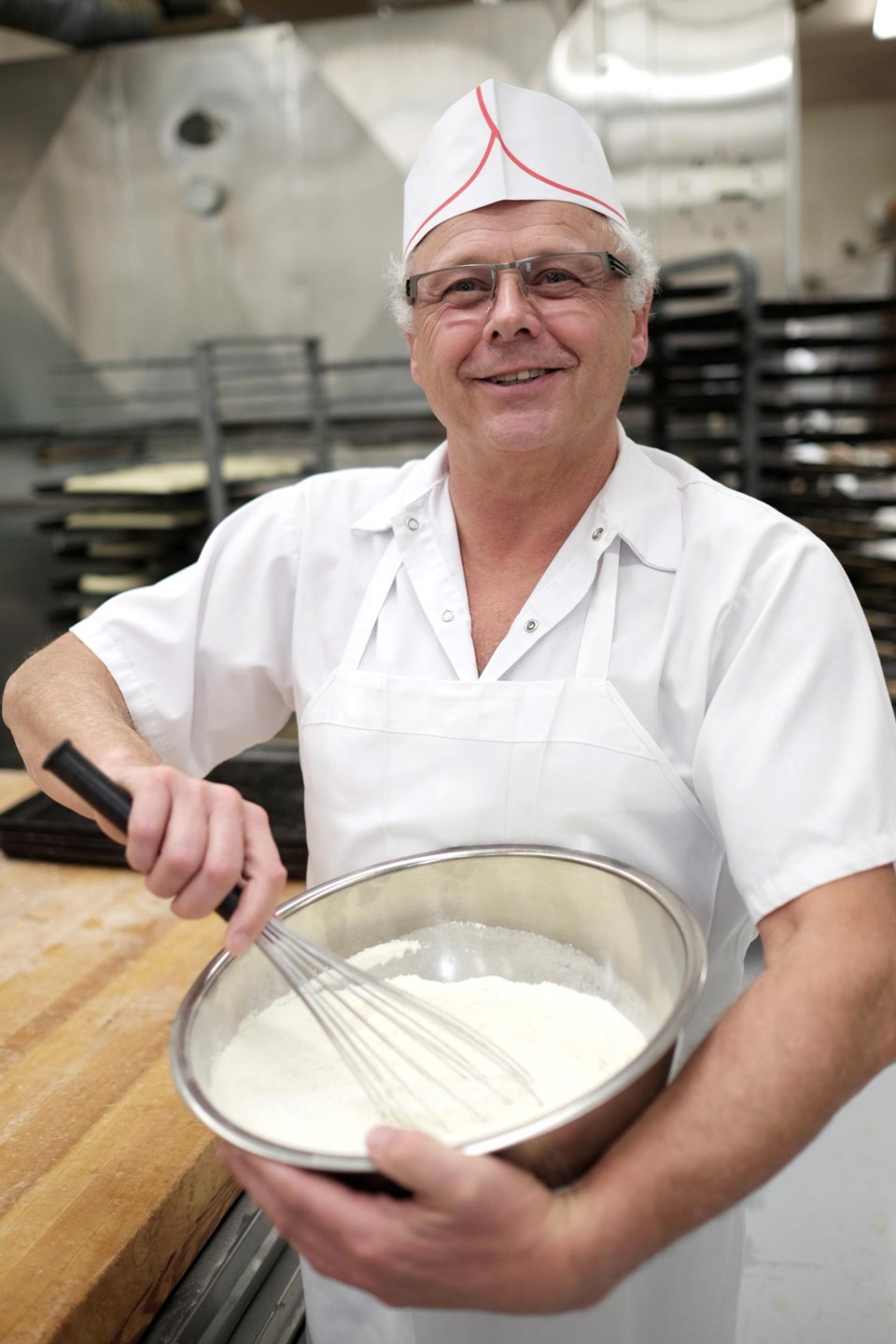 Jack Kuyer at Valley Bakery likes to make Dutch pancakes at Christmas. They are thicker than a crepe, but thinner than traditional pancakes.Larry Wright

The Valley Bakery has been inducted into the Burnaby Business Hall of Fame.
Original owner George Kuyer opened the doors to The Valley Bakery in 1957. In 1979, he passed the business on to his son Jack, who has been at the helm ever since.
“Their commitment to customer service, business excellence and Burnaby as a whole, has been remarkable, and clearly the key to their success as a local favourite in this community,” said Paul Holden, president and CEO of the Burnaby Board of Trade, in a press release.
The bakery will be formally inducted at the Burnaby Business Excellence Awards Hall of Fame and nominees' luncheon on Oct. 8.
The NOW caught up with Jack beforehand to talk about his family’s accolades, what his favourite dessert is and much more.

What does it mean to you personally to receive this recognition from the Burnaby Board of Trade?

It’s always gratifying when you get recognized. I can’t deny that. Certainly, I think it’s a tribute to the people I work with, the staff here. We’ve, over the years, developed a culture where we are community-minded, and we’re also proud of the products we make and the quality of the products, and feel we can hold our head up anywhere. I’m very thankful to the Burnaby community for the support they’ve given us. We have extremely loyal customers; that’s why I say it’s quite heartwarming when they give us the accolades we’ve had over the years.

What’s your favourite dessert to eat?

Boy, I hate to say it, but I kind of like it all. My favourite cookie is a caramel cookie. I tend to go for cakes most of the time, but I like pastries for dessert, too. Things like a mocha slice or a cream puff are items I really enjoy.

What’s your favourite item to bake?

I would say I enjoy making whipping cream cakes. I like working with whipping cream, but you know, in the more traditional baking area, I really enjoy cookies. It’s simple, but if you don’t do it right, it sure is noticeable right away. Our cookies are different; they’re all biscuit-style, it’s more involved than the moist cookies you find out in the market place.

The bakery has been operating in the Burnaby for 58 years now. Since taking over the reins from your dad, how have you seen the business grow?

We’re still a regional bakery, more so than just Burnaby itself because we still have a clientele that come from quite long distances to visit us. But you know, we’ve evolved more than (have) grown. When I first started, most of the grocery stores didn’t have bakeries in them. Today, we’re doing more with pastries and cookies and cakes, and bread is quite a bit less than it was in those days. It’s still a fairly big category, but it’s certainly not what we’re known for. The problem we’re up against is the convenience of the grocery store, and people often won’t make the big efforts for breads, but they will for cakes and pastries.

For a well-seasoned baker such as yourself, do you find you still make mistakes?

Oh you betcha. Nobody has as much fun as the people that work with me when I make a mistake. I will hear about it for an awful long time (laughs). But reality is, I’m probably not the best baker here anymore – if I ever was – because I spend so much time in the office shuffling paper that I don’t get to do it as much.

You’re known for making almost everything on site. Has this been a key to your success?

Oh, for sure. I think that’s what sets us apart. There aren’t too many bakeries doing that anymore. Industry has moved more towards having a lot of product that is, you basically open a box and pull it out and you maybe finish it a bit, but you’re not doing much of the makeup. The products and items we make are generally not found elsewhere and certainly, not the same quality. So you can buy apple turnovers in most bakeries, but it doesn’t mean they’re all the same. I think ours are fresher and much nicer; so you know, that’s what people recognize.

Any new recipes in the works?

We’re always working on new things. We’re actually wanting to make a new bun coming up in October. When people are doing experimenting, I like to be around so I can see what’s going on. We just came out with a citrus tort, which is very nice.

Never been to The Valley Bakery and don’t know what to order?
Jack has a few recommendations, including one of the loaf cakes. Try the Tiramisu or the Chocolate Truffle, both guaranteed to excite your taste buds.
If cookies are your thing, ask for the caramel cookie Jack mentioned above. The caramel is made fresh-in-house!