Bryan Hu arrived in this world earlier than expected – much earlier. Born prematurely, Hu was tiny – just two pounds, according to his doting mom Jane.
Jan 26, 2019 5:01 AM By: Chris Campbell 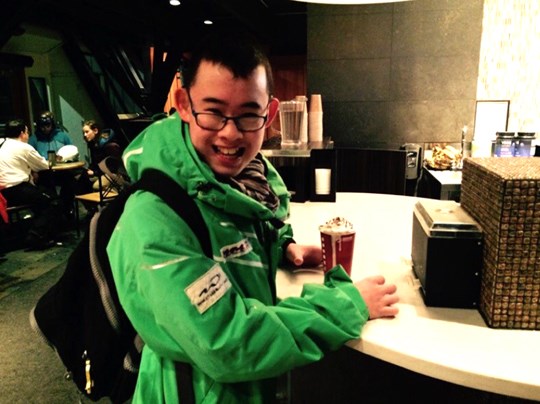 Watch for Burnaby's Bryan Hu on the Variety telethon. CONTRIBUTED

Bryan Hu arrived in this world earlier than expected – much earlier.

The doctors diagnosed Hu with mild cerebral palsy (spastic-ataxia) with gait ataxia being the main functional deficit, plus progressive vision loss and a bilateral severe to profound sensorineural hearing loss.

Oh how wrong they were.

For one thing, Bryan does a lot of talking.

So much so that the Burnaby teen is set to co-host the53rd annual Variety Show of Hearts Telethon on Feb. 10 – airing live on Global BC.

A lot of 16-year-old boys would be nervous about being on live television, but Bryan is unconcerned.

“I’m doing a lot of rehearsing for it,” Bryan said in an interview on Friday. “But I’ve done this before.”

Bryan has a long history with Variety. The charity provide Bryan with a Roger Pen, a hearing aid accessory that helps people with hearing loss to hear better in noisy environments and over distance. The Roger Pen is used in combination with Bryan’s hearing aids to give him optimal access to auditory information. His teachers at Byrne Creek Secondary wear microphones that ensure he hears what they are saying, even in noisy classrooms.

The Roger Pen is helpful when he does volunteer work at the local Kumon learning centre, although he doesn’t really need it when he’s beating his dad during their nightly (quiet) chess games.

Variety had previously helped Bryan with orthotics in 2011 and 2012.

The telethon is Variety - the Children’s Charity’s biggest fundraising event of the year, and airs from 9:30 a.m. to 5:30 p.m. Filmed in the Molson Canadian Theatre at Hard Rock Casino Vancouver, the Telethon will also broadcast both online via livestream at Globalnews.ca.

For Bryan, he just wants to give back so other kids and families get the support they need.

The show will recognize partners and supporters, many of whom will be sitting on the Gold Panel and sponsoring the “3-Minute Countdown.”

“The hourly countdowns have become an extremely popular segment providing viewers with an opportunity to call in and have their donation matched during that time,” said a news release.

Online media blogger, Rebecca Bollwitt, who many know as Miss 604, will be back with her interactive Social Lounge where she and her team will be providing live #ShowOfHearts updates. Also returning will be legendary wildlife artist Robert Bateman, whose stunning Mossy Branches Spotted Owl poster will be sent to those who donate $169 or more.

Donations to the Show of Hearts can be made by calling toll-free at 310-KIDS and online at variety.bc.ca or by texting “KIDS” to 45678 to make an automatic $20 contribution. Viewers can also register now to have their own fundraising page.

The online platform enables individuals and groups to connect with friends, families and co-workers in support of Variety. To sign up or to find out more information, visit http://supporting.variety.bc.ca/site/TR?fr_id=1050&pg=entry