This map shows where the COVID-19 hotspots are in B.C. (MAP)

The BC Centre for Disease Control has released an updated map of the latest coronavirus (COVID-19) hotspots in the province.

Each week, the BCCDC releases an update of the COVID-19 cases for the most recent seven-day period (Sunday to Saturday).

In the Lower Mainland, Vancouver has the second-highest number of new cases of COVID-19, with 1,060 cases identified over the past week. However, Vancouver is divided into six local health areas.

The Tri-Cites local health area has the fourth-highest number of new cases in the Lower Mainland, with 411. 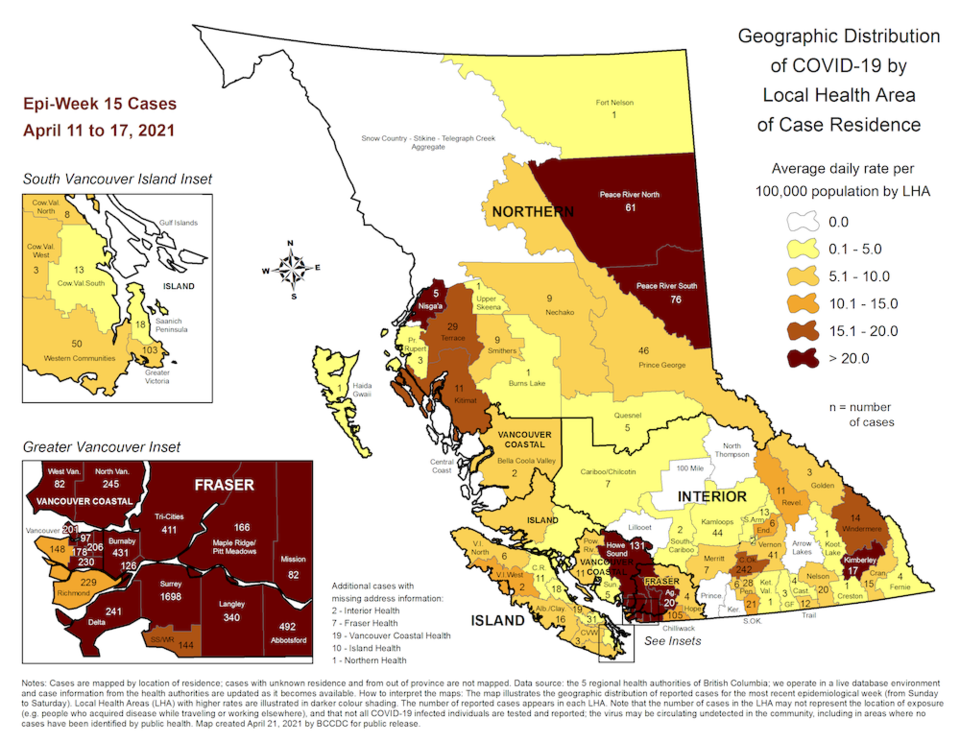 Photo via The BC Centre for Disease Control

People will be fined $575 for breaking the new order restricting non-essential travel in B.C.

Minister of Public Safety Mike Farnworth told reporters in a press briefing Friday (April 23) that a $575 fine will be issued to people who contravene the new order restricting non-essential travel in the province.

That said, not everyone agrees that the aforementioned regional zones will reduce transmission in key COVID-19 "hotspots" across the province. For example, several locals have commented on social media that the new order will not prohibit people from Vancouver from going to Whistler for vacations. Similarly, people who live in Surrey may still travel to Downtown Vancouver, while Vancouverites may still camp in the Fraser Valley.

Of course, Farnworth stated that the PHO’s guidance remains unchanged throughout B.C.: everyone should continue to stay within their local community – essential travel only.