TransLink says its new SeaBus will start running this summer

TransLink announced today that its new SeaBus is getting ready to set sail from a Netherlands shipyard to Vancouver.
Mar 14, 2019 1:52 PM By: Chris Campbell 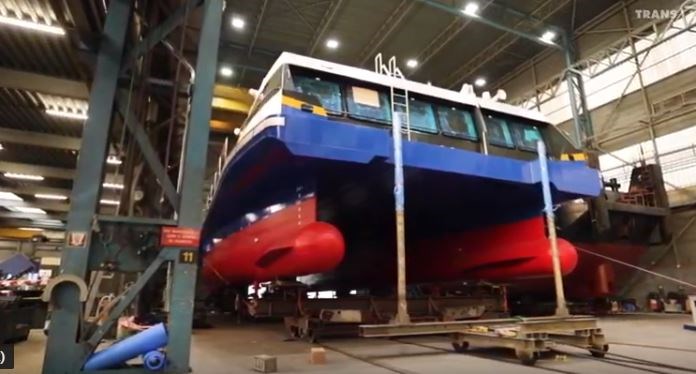 The new SeaBus, called Chinook, as it was being built. SCREENSHOT

TransLink announced today that its new SeaBus is getting ready to set sail from a Netherlands shipyard to Vancouver.

The Burrard Chinook was christened at Damen Shipyards in the Netherlands this January and will start its long journey soon, according to a news release.

“The Chinook name is a tribute to the largest and most iconic of the Pacific salmon species,” said the release. “The Chinook salmon has played a central role in life on the west coast of British Columbia for generations. It is also a renowned swimmer and a critical part of the ecosystem in the Burrard Inlet and the northern Pacific Ocean.

The Burrard Chinook is funded through the Public Transit Infrastructure Fund (PTIF); the Government of Canada at 50 per cent, the Province of British Columbia at 33 per cent and TransLink at 17 per cent. Total cost of the vessel is $32.2 million.

The Burrard Chinook will join the Burrard Beaver, Burrard Otter II and the Burrard Pacific Breeze in service late this summer.