A union accusing the East Vancouver grocery delivery business Spud of purposely moving work away from its union shop to a wholly owned non-union subsidiary in Burnaby has won its case in front of the B.C. Labour Relations Board.
Aug 18, 2020 11:52 AM By: Cornelia Naylor 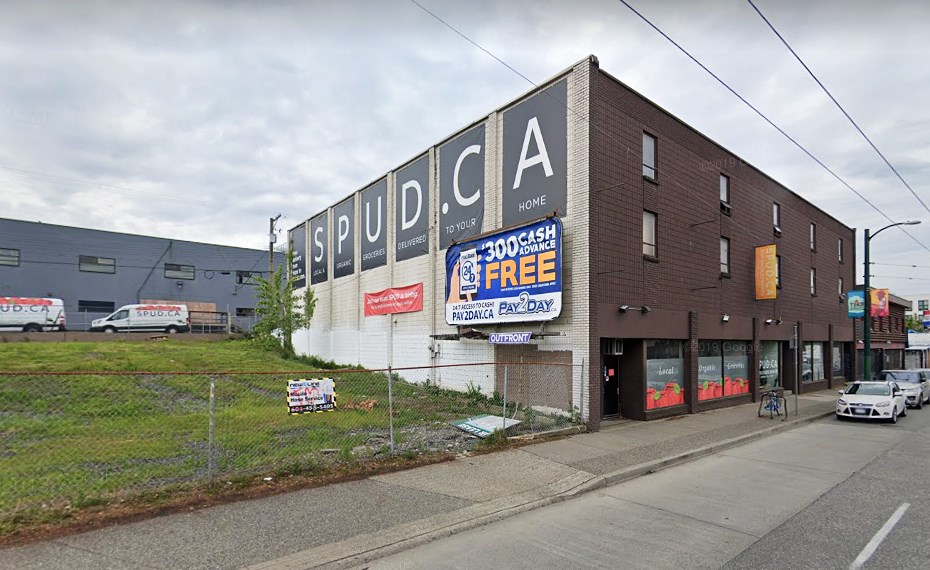 The East Vancouver grocery delivery service, Spud has lost a case at the B.C. Labour Relations Board after the company moved work from its union shop to a non-union subsidiary in Burnaby.Google Street View

A union accusing the East Vancouver grocery delivery business Spud of purposely moving work away from its union shop to a wholly owned non-union subsidiary in Burnaby has won its case in front of the B.C. Labour Relations Board.

All workers who pick and pack products at Burnaby’s Food-X, which operates a warehouse on Trapp Avenue, will soon be covered by the same contract as workers doing the same jobs at Spud, which has a warehouse at Commercial Drive and Hastings Street.

The International Brotherhood of Electrical Workers Local 213 has long represented the Spud workers, according to an LRB ruling last week.

The union accused the company of “a classic case of double breasting” in March 2019, when it transferred home delivery work from its East Van union shop to Food-X’s non-union shop, which had, until then, stored and delivered groceries and household items for third party retailers rather than its own customers, according to the ruling.

The union argued Food-X was not serving a new or expanded customer base but delivering the same products to the same customers in the same geographic area as when Spud performed the work.

“The only difference, the union says, is that the picking and packing of those orders is no longer performed by bargaining unit members,” stated the ruling.

The union applied to the LRB for a declaration that there should be a single bargaining unit for Food-X and Spud and that Food-X should be bound by the same contract the union has with SPUD.

The union therefore also applied to have its certification amended to add Food-X as a common employer and to have all the company’s warehouse workers except truck drivers, office and sales staff added to the bargaining unit.

Spud argued the union hadn’t met the legal test for a common employer declaration and that it was improperly trying to sweep Food-X's employees into the union.

The company argued it and Food-X were in a client and service provider relationship and that moving home deliveries to Food-X hadn’t adversely impacted union work.

Home deliveries had been moved to Food-X because the Spud warehouse had been overwhelmed and the company was losing customers, the company said.

“They say they avoided what would have been a truly adverse impact of the loss of all of Spud Vancouver’s customers and the closure of its operation,” stated the ruling.

But the union said the company didn’t present evidence to support its claims.

It said Spud’s only witness, human resources partner Bryony Beresford, was uninformed about key aspects of the evidence and most of her evidence was hearsay, including claims the business would have been destroyed if home deliveries hadn’t been moved to Food-X.

“(The union) says … the only inference to draw from the respondents’ failure to produce readily available documents or call informed and available witnesses is that their evidence would not be favourable to their case,” states the ruling.

In the end, labour relations board vice-chair Stephanie Drake sided with the union, granting a declaration that Spud and Food-X were common employers and ordering the union’s certification to be amended.

Drake said she accepted that Spud’s decision to move home deliveries to Food-X was made for business reasons and “not in an effort to defeat the rights of the union and the bargaining unit” but concluded the move had adversely impacted union work and there was a labour relations purpose in granting the union’s common employer declaration.