A sudden, dramatic arrest unfolded in front of a woman parked in a Burnaby mall parking lot Tuesday afternoon.
Nov 18, 2020 8:41 AM By: Cornelia Naylor 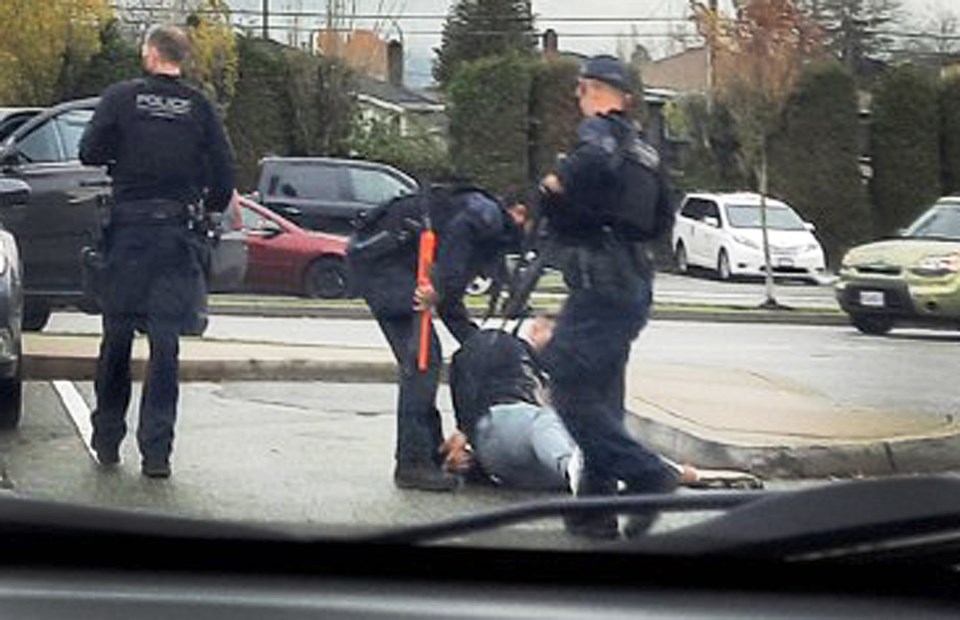 A sudden, dramatic arrest unfolded in front of a woman parked in a Burnaby mall parking lot Tuesday afternoon.

Elaine McRitchie was inside her car waiting for her husband in the Brentwood mall parking lot near the Willingdon Avenue entrance at about 2:45 p.m. when she heard a series of loud bangs

“I thought it was bombs going off,” she told the NOW. “It was so loud, and then there was just smoke all over the place, and all of a sudden, through the smoke, there’s like 15 cops. It was crazy.”

About seven police vehicles, most unmarked, had suddenly descended on the area without sirens, according to McRitchie, and a man that she had observed walking through the parking lot with a coffee in his hand was on the ground in cuffs.

“I had no idea what was happening,” she said. “It was so terrifying just to all of a sudden have this stuff happening around me.”

The operation was conducted by the Combined Forces Special Enforcement Unit, the province’s anti-gang agency, as part of a joint drug investigation with Victoria police, according to CFSEU media spokesperson Sgt. Brenda Winpenny.

She said officers had arrested a “high-risk individual” in relation to the investigation.

“At this point, unfortunately, we can’t say much more than that because it’s still an ongoing investigation, and so we still have some outstanding individuals and avenues that we’re going to be looking at,” she said.

The loud bangs McRitchie heard were “distraction devices,” a commonly used tool in high-risk arrests, according to Winpenny.

“It has the same effect on the target that you’re trying to arrest as it did to this poor lady that was scared by it,” she said. “It stuns them so that they don’t realize that officers are right there effecting an arrest. It gives them that little window of opportunity for the officers to get in there and arrest the person without any kind of safety risk that they might pose to the public.”

Winpenny didn’t know whether the man was armed at the time of his arrest.