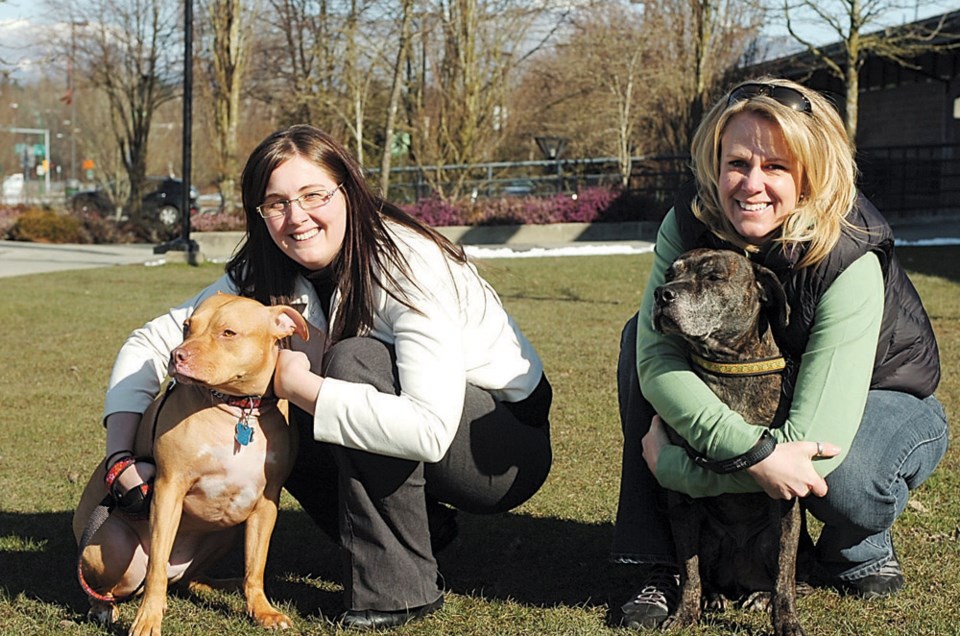 Kristen Neratini, left, with Koda, and Shelagh Begg, with Dizzy, are part of the HugABull Advocacy and Rescue Society.

At Monday night’s meeting, council tabled a staff report recommending that pitbull terminology, categorizing pitbulls as a vicious dog, be kept and strengthened in the city’s animal control bylaw. Council is also giving the public until Sept. 20 to provide comment on the proposed changes and sign up ahead of time to present as a delegation at the Sept. 30 meeting.

“Delta, Pitt Meadows, Maple Ridge and New Westminster – they’ve all had this same situation come up and their residents said, ‘We don’t want it,” Kristen Neratini, a Burnaby resident, pitbull owner and a HugABull Advocacy and Rescue Society director, told the Burnaby NOW right after the Sept. 9 meeting. “Their staff worked really hard to look at other options and I just think, why can’t Burnaby do this?”

Other HugABull supporters and pitbull owners joined Neratini at last night’s council meeting. Last June, She was part of a delegation that spoke to council, calling on the city to remove the breed-specific language.

“We just have to take what we learned today and know that they’ve given us a time frame to try and get feedback,” she said. “My hope is that if they receive feedback that’s positive and speaks out against it, they really think about that and hopefully reverse this recommendation from staff and put together a bylaw to protect everybody.”

Neratini said the proposed changes only support the stereotype that all pitbulls and their owners are dangerous.

“I never felt so much love from a four-legged creature before in my life,” she said about her own pet. “It’s very hard to go home and see her and to know that taking her outside of our backyard, I run the risk of being stopped by animal control. I run the risk of running into people who don’t approve of my choice of dog and feel they have this right to chastise me in public for it. I don’t understand that.”

The other glaring issue Neratini had concerned the statistics used in the report, which state pitbulls are the most frequently identified biting breeds.

“The number of bite incidents involving pitbulls in Burnaby is concerning and further compounded by this breed’s potential to inflict significant injuries,” the report states.

“So you’ve already got five different breeds of dogs, and then there’s the mixes,” she said. “Then they went and compared it to German shepherds.”

Neratini noted it’s unfair to compare one breed and lump several others under one general term.

“That narrows your stats five to one,” she said. “Be as absolutely specific as possible because otherwise you’re leading the community into a false sense of security.”

Denise Jorgenson, director of finance, said the city does not want to mislead council or the public on the numbers.

“The subject of animals and particularly pets can stir the emotions of a community,” Jorgenson states in the report. “The bylaw review has been conducted with a balanced consideration for Burnaby residents (both pet owners and non-pet owners) and Burnaby businesses involved with pets.”

The B.C. SPCA, whose data is used in the staff report, does not support keeping the breed-specific language in the bylaw, either, according to Marcie Moriarty, the organization’s chief education and prevention officer.

“As an organization, we do not support breed-specific language simply because we don’t feel the evidence suggests it works,” Moriarty told the NOW. “We recommend a more comprehensive breed-neutral dangerous dog and reckless owner bylaw. The absolute protection of people’s safety is paramount.”

Moriarty said a bylaw should encourage responsible pet ownership and the current recommendations do not address the main concern around safety.

“We absolutely recognize the city has the best intentions in trying to create a safe community, and our suggestion would be one to be breed neutral and targets responsible pet ownership more broadly,” she added.

Maryann Manuel, acting city clerk, said the tabled report allows the city to advertise the amendments for two weeks and for staff to compile any responses received until Sept. 20.

Council is expected to lift the report from the table at its Sept. 30 meeting. At that time, delegations about the issue will happen at the meeting.

Manuel also said the second part of the report, addressing pet sales, is expected to come forward at the Oct. 7 meeting and will most likely follow the same process as the first part of the report. It will be tabled to give people time to respond to the proposed changes via letters or as delegations. Then at council’s Oct. 28 meeting, the report will be lifted from the table and discussed.