*UPDATE: Since this story first appeared online on Friday morning, the City of Burnaby has written to the commuter in this story saying that it had put the signal back into "normal operation.
Aug 23, 2019 6:03 AM By: Chris Campell 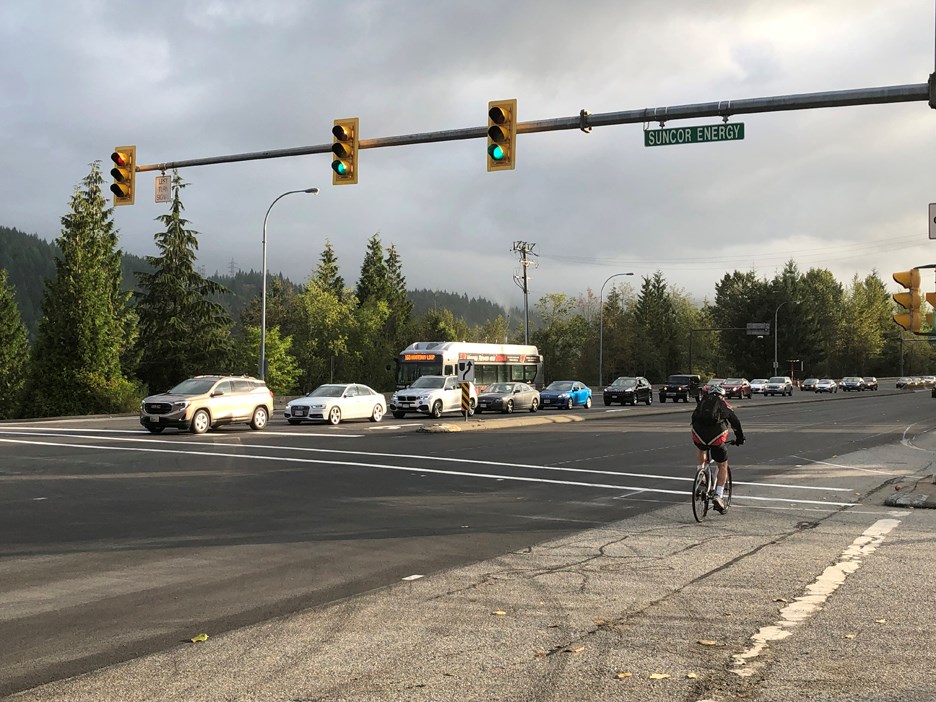 Vehicles were lined up for a long distance Thursday morning at the intersection of Barnet Highway and Suncor in Burnaby because of "short" traffic signals. Chris Campbell photo

*UPDATE: Since this story first appeared online on Friday morning, the City of Burnaby has written to the commuter in this story saying that it had put the signal back into "normal operation."

Drivers say they are being left in traffic “limbo” – leading to long lineups – after a City of Burnaby road project resulted in a signal “short cycling” on Barnet Highway.

Ken Bell drives the Barnet daily from Coquitlam and told the NOW that the morning commute has been chaos for about six weeks.

“It is very frustrating,” Bell said. “The worst part of my day, actually. (This) has meant a huge clusterf*** on the Barnet.”

The bottleneck starts, Bell said, at the Suncor terminal intersection, where the city recently repaved the road. The repaving project removed what is known as an inductive traffic loop, in which the weight of a vehicle triggers a sensor that makes the light change, according to an email Bell received from Burnaby engineering department.

The situation, Bell said, has resulted in the intersection’s light “short cycling” – meaning it the light constantly triggers to go red despite there not being any vehicles needing to cross.

“There is no reason for this short cycling, even if work is going on at the terminal requiring crews to go back and forth with their equipment,” Bell said in an email to the city. “Many times the light just goes red and there is no one crossing.”

During peak traffic in the mornings, these constant red lights are causing “extreme backups,” Bell said, with vehicles lined up all the way to Clarke Street in Port Moody.

Bell wrote to acting Port Moody mayor Hunter Madsen about the problem and the politician said he too had been left in “limbo” by the light recently.

“I also encountered that light at the Suncor terminal stop some days ago - and, just as you described it, the Barnet commuters all stopped and sat there in limbo for a while, without any cross traffic,” Madsen wrote in an email to Bell.

The NOW visited the intersection Thursday morning and witnessed the light changing more than a dozen times in just a few minutes, despite there being no drivers or pedestrians looking to cross. Hundreds of  vehicles were backed up.

Bell has written to the City of Burnaby and received an explanation of the situation earlier this week.

“Currently, the eastbound through and protected left are in ‘constant call’ due to the lack of loops,” a City of Burnaby traffic technician wrote in an email to Bell. “We have reduced the max green on the left and added a max recall for westbound through. Once the traffic loop is installed, we will change the signal timing back to normal.”

No timeline is given for when the traffic loop will be installed and that frustrates Bell.

“The repaving work is now complete and it would seem to me that it’s incumbent of the city to fix the problem that it created that is affecting thousands of motorists coming out of the Tri-Cities every morning,” Bell wrote in an email to the city. “Why didn’t the city have a plan to deal with this looping issue before the repaving project started anyway?”

Bell has asked the city to just remove the entire light until the loop is installed.